On to updates. Laughing outrageously at Jaejoong with his Santa shaving cream beard and mustache. Rather distinquishing, old boy!! I’ll bet that Jae will look so sweet as a dapper, gray-haired Grandpa. Something to look forward to (for him–not me) I won’t be around by then. 🙁
Momma Cha

Something to share.
.JYJ Kim Jaejoong showed his absurd charm.

Kim Jaejoong uploaded an interesting photo in his Twitter account on the 26th. The photo was taken after shaver cream was smeared below Jaejoong’s nose and chin. It reminds people of Santa Claus’ beard and that sincere look was amusing.

In addition, JYJ will begin their worldwide concert tour in April. 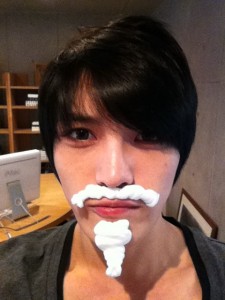