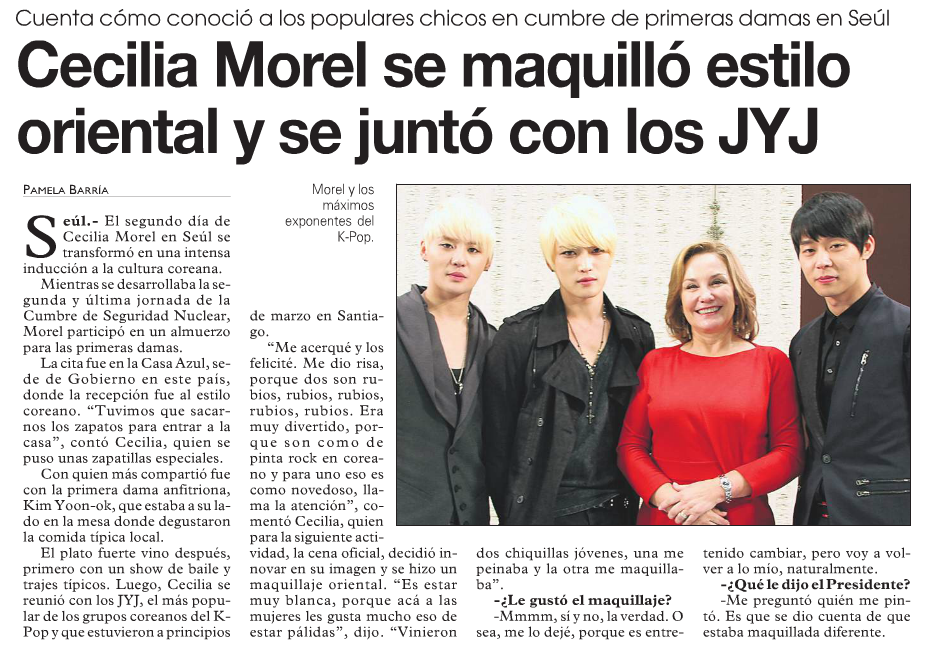 Seoul. The second day of Cecilia Morel in Seoul transformed into a huge introduction to the korean culture.  During the second and last day of the Nuclear Summit, Morel had lunch with the first ladies. The lunch appointment was in the Blue House, seat of the government, that was built in Korean style. “We had to pull off our shoes to enter the house” said Cecilia, who had to put on special footwear.

She sampled the local food during lunch, and spent a lot of time with the korean first lady, Kim YoonOk, who was sitting right next to her .  The main event came after lunch, which began with a dance show with performers wearing traditional clothes. Later, Cecilia met JYJ, the most popular korean k-pop group who were in Santiago [Chile] in the beginning of March . ”I went to meet them and congratulated them. It was funny because two of them were very blonde, blonde, blonde, blonde. It was also funny because they look like Korean rock stars, and for me, that is something new and it catches attention” said Cecilia.

(T/N; this is a rough translation; information unrelated to JYJ omitted )

The First Lady of Chile tweeted about JYJ:

[TRANS] At the First Ladies’ banquet in Korea, I was with JYJ

One thought on “[PIC/TRANS] 120327 JYJ with Chile’s First Lady Cecilia Morel, Featured in a Chilean Newspaper”