I find it rather intriguing that royalty in the present age prefers to marry “commoners”. That means everyday people. That is a good thing. Also, I’m elated to hear that this King will only marry once. 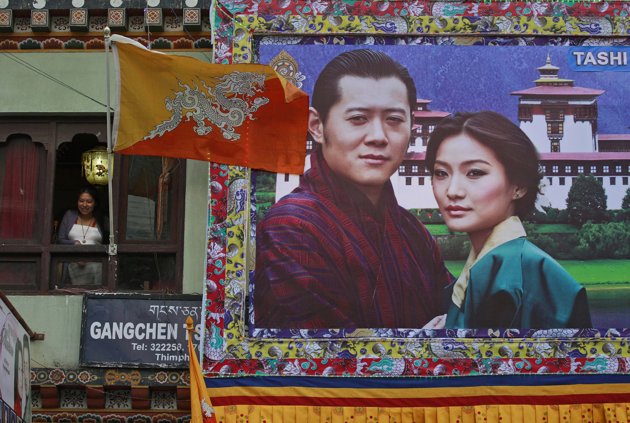 PUNAKHA, Bhutan (AP) — The beloved king of the tiny Himalayan nation of Bhutan married his commoner bride Thursday in an ancient Buddhist ceremony at the country’s most sacred monastery fortress.

King Jigme Khesar Namgyal Wangchuck, wearing the raven crown, came down from his golden throne in front of a huge statue of Buddha to place a smaller, silk brocade crown upon the head of his bride, Jetsun Pema. Monks chanted in celebration as she took her seat beside him as the new queen of the country.

The wedding has captivated the nation, which had grown impatient with their 31-year-old bachelor king’s lack of urgency to find a bride and start a family of his own since his father retired and handed power to him five years ago.

The celebrations began at 8:20 a.m. — a time set by royal astrologers — when the king, wearing the royal yellow sash, walked into the courtyard of the 17th century monastery in the old capital of Punakha and proceeded up the high staircase inside. A few minutes later, his 21-year-old bride arrived at the end of a procession of red-robed monks and flag bearers across a wooden footbridge over the wide, blue river beside the fort and followed him inside.

Singers chanted songs of celebration amid the clanging of drums and the drone of long dhung trumpets. She wore a traditional wraparound skirt with a gold jacket with deep red cuffs.

Inside, the nation’s top cleric, who presided over the wedding, performed a purification ceremony for the couple in front of a massive 100-foot Thongdal tapestry of Bhutan’s 17th century founder, the monk-king Zhabdrung.

The pair then proceeded to the temple for a ceremony broadcast live on national television, save for a few minutes when the king, his father and the cleric, known as the Je Khenpo, entered the sacred tomb of Zhabdrung, where only they are allowed.

The king’s father then gave the bride an array of five colored scarves representing blessings from the tomb. Hesitantly, she then approached the king’s throne with a golden chalice filled with the ambrosia of eternal life. They held it together for several seconds and then he drank.

The king, wearing his red Raven Crown, with an image of the protector bird rising from the top, came down from the throne and placed a smaller crown on her head. After she took her place as queen, the newly married couple was feted by monks playing deep tones on traditional trumpets and pounding drums.

The Je Khenpo presented them a series of gifts — a mirror, curd, grass, a conch — representing blessings for longevity, wisdom, purity and other well wishes.

Unlike this year’s other royal wedding — that of Britain’s William and Kate — there were no foreign princes, no visiting heads of state, no global celebrities. Just the royal family, thousands of nearby villagers gathered at a nearby field waiting for the royal couple to celebrate with them and the rest of the country’s 700,000 people watching live on TV.

“The whole theme of the wedding was to keep it a simple family affair, that is the Bhutanese family,” said Kinley Dorji, Bhutan’s secretary of information.

The Oxford-educated king is adored for pushing development and ushering in democratic reforms that established a constitutional monarchy and legislature in 2008. His teen-idol looks — slicked back hair, long sideburns — his penchant for evening bike rides through the streets and his reputation as a laid-back, accessible leader, also make him the rare monarch whose picture adorns the bedroom walls of teenage girls.

His bride, the daughter of a pilot, has been on an introductory tour of the remote villages of the nation since the king told Parliament in May, “It’s now time for me to marry.”

The remote nation began slowly opening up to the rest of the world in the 1960s. Foreigners and the international media were first admitted in 1974. Television finally arrived in 1999.

The country has not had a royal wedding since the fourth king held a mass ceremony in 1988 with his four wives — four sisters whom he had informally married years earlier. The current king says he will take only one wife, so the country is unlikely to see another such celebration for a long time.