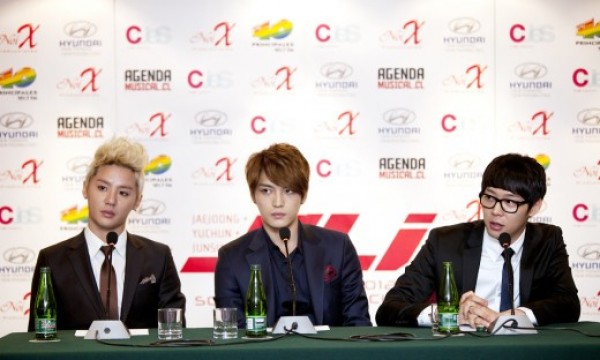 JYJ recently said that they were surprised by South American affection.

On March 8, JYJ held a press conference for their ‘JYJ South America Tour 2012′ and said, “We arrived at the Airport early this morning, and there were lots of fans there to welcome us. We were surprised at the many female fans who kissed us on the cheeks.”

South American fans welcomed JYJ with traditional South American greetings. The group members were surprised by the cultural differences but they soon smiled and appreciated the fans’ support.

The members were also surprised at the fact that there were many male fans in South America.

JYJ says, “We think that many fans love and support us for our powerful performances and talented vocal skills. Even though we are in South America for the first time, we knew about the country through social networks. South American fans also send lots of packages to our agency. They don’t know much Korean but they wrote short messages in Korean and it made those fans memorable. We will do our best to make the concert perfect for their support.”

JYJ will hold their exclusive concert on March 9 at Teatro Caupolican in Santiago, Chile, and on March 11 at Explanada Sur del Estadio Monumental in Lima, Peru.