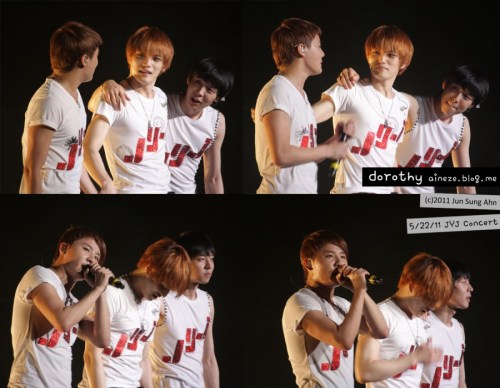 A few weeks ago, when I heard that JYJ would be in Newark, New Jersey, I asked my husband to take me to the concert. I am not a fan of flying, so we would have to drive. It is a 7 hour drive, but with rest stops and meals, it would take us 9 hours to get there. My husband thought about it, and then decided to take me to the concert. My daughters said that they wanted that to be my birthday present. So, I was thrilled. Nervous and always wanting to cancel the trip (that is what I do). But, then on April 16th, after we got our new puppy, in the car heading back to the house, my daughter loaded the transportable internet, logged on to Ticket Master and bought two tickets for the New Jersey Show. Needless to say, I was excited.

As time went by I toyed with the idea of telling my friends on DBSKALWAYS what I was about to do. However, knowing that I was disappointed in November when JYJ was in New York, and I did not get to attend the showcase, I decided not to say anything until I was actually IN Newark. I kept my promise to myself.

So, on May 21st, around 9:30 AM we left home: Canada. We drove to Newark, checked into the Hotel, and relaxed. That evening, we were excited to have Cable TV (we do not have Cable TV at home – by choice). So, we were Channel surfing when my husband said, “the perfect thing for your Korean weekend.” I replied, “What’s that?” Well, to my delight and surprise, there was a KBS drama on called “The Great King Sejong.” This episode was about the 12th year of King Sejong’s reign, and the year in which the Crown Prince defied him on a number of issues. I watched the drama and tried to read the sub-titles. I could not believe what a good time I was having. I felt so blessed.

I brought two outfits with me. But, once I got to New Jersey, and once the 22nd rolled around, I grew dissatisfied. So, I went shopping and got a new outfit. There was a 60% sale and an additional 20% off the sale price. So, I was lucky there. The blazer and slacks that I bought complemented the JYJ T-Shirt that I received with “The Beginning” Special Edition. We dressed and got on the road to the Prudential Center. We arrived at 5:30PM, and we were the first people at the door. Shortly after a father and daughter came up and we started to talk. They had driven 10 hours one way from Toronto to see JYJ. Then, a family came by. They had driven two days from Florida to see JYJ. Inside the concert hall we met a young lady, about 17 years old, who flew from Georgia with her Mom to see JYJ. This was their second concert with JYJ! Last year, they flew to Las Vagas to see JYJ. She had a Jaejoong-style necklace, and a relly nice light stick and wand that said “JYJ.” The fans started rolling in and talking and just enjoying each other’s company. The tone of camaraderie was so ripe and evident, and the atmosphere was so very positive. It was such an uplifting experience. Wow! is all that I can say.

The fans were of all skin colours and races: Korean, Chinese, mixed race of every kind, Blacks, Caucasians. There were ladies older than I am wearing JYJ T-Shirts and red blazers and scarves. There were 12 year olds, 17 year olds, their aunts in their 30s, and ladies in their 60s. There were parents who traveled with their children. There were fathers who brought their daughters. My husband who now has a new-found appreciation and respect for JYJ – who came only to bring me to the show and give me this birthday present.

The doors opened at 7PM, and I squealed. We found our section and sat down. We talked with fans in front of us and next to us. To give you an example of the generosity and positive spirit and atmosphere that JYJ engenders – some fans in front of us who drove hours from Virginia to see JYJ, saw that I had a light stick, but my husband did not have any JYJ items. So, this one fan took off one of her bracelets (the red glowing one) and put it on my husband’s wrist. Imagine that: strangers, but brought together with the camaraderie that JYJ engenders. It was something to witness.

My husband remarked that at other concerts that he attended, the fans do not acknowledge each other nor di they talk to each other; they only talk with the people that they came with. But, he remarked how different and caring it was at the JYJ concert.

So, JYJ came on stage 10 minutes after 8PM. The crowed screamed and cheered throughout most of the next two hours. We were on our feet for every one of the songs. We were dancing along with JYJ and doing the hand movements. We sang in Korean, we sang in English. After about 30 minutes. JYJ loosened up and especially Yoochun – he was smiling and being light hearted. Junsu was working hard and putting 150% into every song and performance. So, was Yoochun and so was Jaejoong. When they sang Fallen Leaves, Jaejoong ended the song with tears in his eyes.

When we thought that JYJ had completed the concert, and they went back stage, the crowned began to shout “JYJ Saranghe!” over and over and over again for minutes until JYJ came back on stage to uproarious screams and cheers. They performed about 4 more songs, and then left the stage again. They had another standing ovation that went on for some time. They came back out in JYJ T-shirts and performed one more song.

To be honest, I cannot remember the order of the songs nor the name of each one. But, they performed songs from The Beginning, such as Empty (they started the show with that song) and Ayyy Girl. Then each one did their The Beginning solos. Then they did the SKK Scandal theme song.

When they sang SKK Scandal theme song – the audience sang the chorus in Korean right along with them. Yoochun looked at Jaejoong as if to say – “how do they know Korean ” – then the boyz sang and sang and each time the chorun came around Yoochun and Jaejoong pointed the mic to the audience and sang along with us,. It was something to experience.

Then there were songs from Music Essay, and some new songs too. They sang in Korean and English. Yoochun spoke English and so did Junsu. I think Junsu said that English is so hard. Jaejoong spoke Korean. It did not matter – the love that was outpouring to the three young men was wonderful and warm. It was such an atmosphere of positivity. Wow! My husband remarked that their singing was as perfect at the CDs that I play every day and all day on the weekends. So, he knows what he was saying. He also said, “Those guys can sing!”

All I can say at this time is that JYJ is a blessing. Their show was amazing, and I am so happy that they came all the way from Korea to perform for us!

Thank you JYJ. Thank you so much for such a wonderful performance.

One thought on “FanAccount JYJ Live Tour in New Jersey”