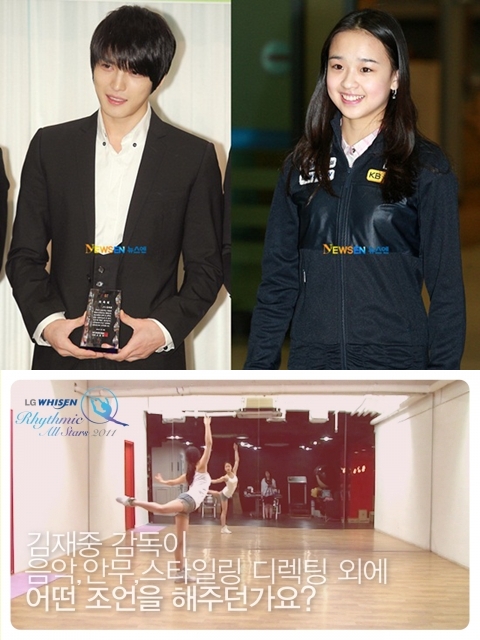 Rhythmic Gymnast Sohn Yeon Jae and JYJ’s Kim Jaejoong was featured together in a preview video for the Gala show.

Kim Jaejoong, who directed the JYJ Worldwide Concerts, also directed this highly-anticipated Sohn Yeon Jae Gala performance, and a practice video of this event was revealed.

This video, which was revealed via Nate included a video of the production team meetings, with Kim Jaejoong putting up his ideas, as well as Sohn Yeon Jae’s practice and interview. This video is about the preparation process of the Rhythmic Gymnastics Gala Show “LG Whisen Rhytmic all Stars 2011.”

In this video, Sohn Yeon Jae uses her skills that have been shown in her competitions, as well as other newly choreographed moves, displaying a strong performance. This heightened the suspense for the Gala show, which will hold its debut performance on 11 June.

Kim Jaejoong and the LG Whisen Rhythmic All Stars production team have meshed well. Despite his current participation in the JYJ Worldwide Concerts, he has been communicating with the team via emails, selecting the soundtracks, direction, choreography and styling for this special stage which he is the director of.

Sohn Yeon Jae said, “Director Kim has given his advice on even the smallest details, including expressions and looks etc.” also, Sohn Yeon Jae showed her support for Kim Jaejoong, who is currently involved in the JYJ Worldwide concerts, via a short video message, showing her thankful emotions.