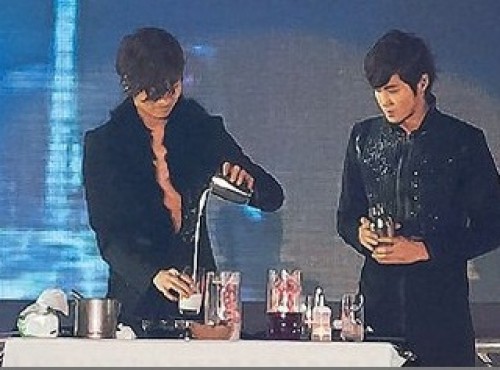 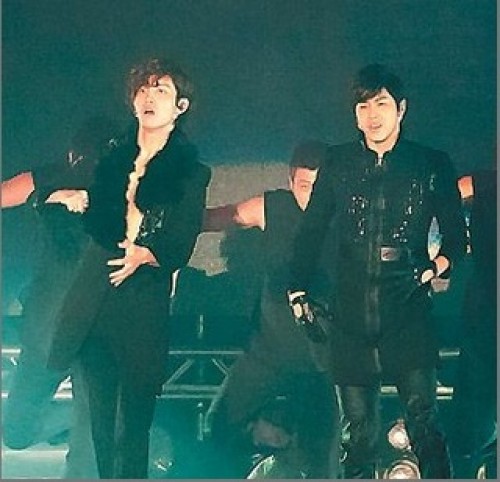 After anticipating for 3 years, Korean band TVXQ held their fan party at Taiwan. Fans were still as passionate although the group was left with only Yunho and Changmin performing on stage.

Yunho started doing some tricks as the duo were on stage shaking bubble tea, accidentally causing some milk to be splattered onto Changmin.

The duo complimented each other on being manlier during the 3 years. Changmin appeared on stage in a deep V suit, displaying his chest lines. Yunho said shyly, “recently, many people have said that my expressions have become deeper.” The host then asked him to electrify fans with his eyes, causing fans to scream, and Changmin said jokingly, “my liver conditions have improved.”

The both of them loves drinking Taiwan’s bubble milk tea, hence the organisers arranged for the duo to shake “double Q milk tea”, signifying that with the “mixing” of Yunho and Changmin, the duo has gained better rapport.

As Yunho tried to do some tricks with the shaking of the milk tea, he accidentally splattered some milk tea onto Changmin; after which, he said jokingly that the shakers were a defect when he couldn’t open the cover. Even then, having a sweet tooth, he still drank up the milk tea in big gulps.

TVXQ continued activities as a duo, and Yunho and Changmin have performances practices during Christmas, Changmin said, “I will listen to Christmas carols back home.” As fans were worried that he might be lonely, he said jokingly, “ah…life.”