Posted on December 17, 2011 by jugglingtheclouds 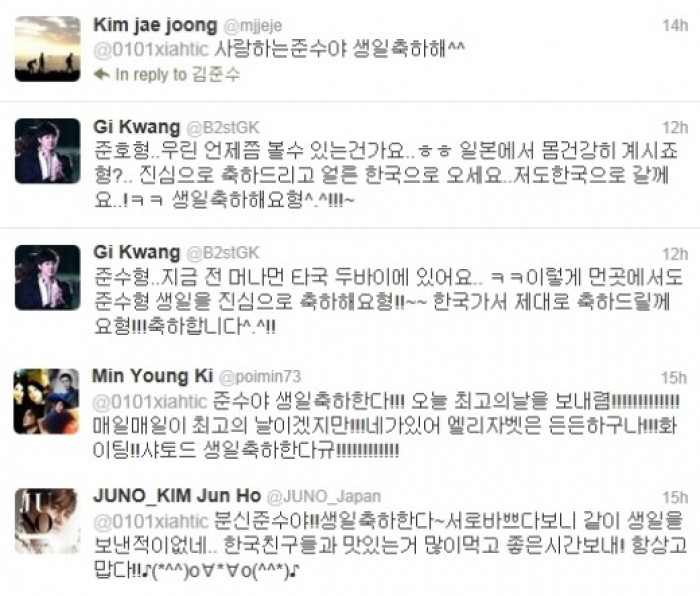 They left mentions for Kim Junsu, wishing him on his birthday, with Kim Jaejoong’s saying “To my beloved Junsu, happy birthday”, B2ST’s Lee Gi Kwang said, “Junsu hyung.. I’m in Dubai right now, a foreign country so very far away from you.. keke Even from such a far away place, I want to sincerely wish you a happy birthday, hyung!!~~ I’ll give you a proper birthday wish when I get back to Korea, hyung!!! Happy birthday^.^!!”.

In particular, Kim Junsu’s elder twin brother Kim Junho also revealed his regret of not being able to spend his birthday with his younger brother by saying, “Junsu, my other half! Happy birthday. I realized that we’ve never spent a birthday together because we’re both so busy.. Eat lots of great food with your Korean friends and have a great time! I’m always grateful to have you”.

In response to these, netizens expressed, “Junsu-oppa Happy Birthday”, “You must spend the happiest day ever today”, “Have you had seaweed soup?” among other responses.

On another note, Kim Junsu is practicing intensively in light of the performance of the Musical Elisabeth in 2012.