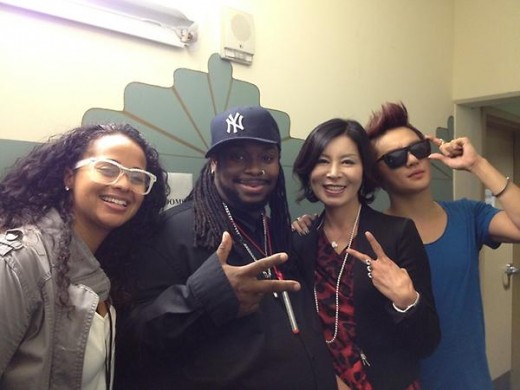 On September 3, Kim’s mother tweeted a picture with the comment, “We met Automatic. He was happy to see us and he cheered for Jun Su throughout the concert saying that he has huge energy. He kept holding his thumb up.”

She added, “The song “Uncommitted” in particular! He waved a glow stick that I gave him as a present. He has it around his neck.”

In the picture, Automatic, Kim, and Kim’s mother are posing for the camera. Kim and his mother showed off their beautiful appearance together.

Automatic worked on Kim’s English single “Uncommitted” as a producer. He drew a lot of attention by praising Kim through his Twitter account, “Jun Su reminds me of Michael Jackson. Incredible and natural ability like Michael had. He really is ready for America.”