Heon Shik’s Culture Twist> The notions of gratitude, loyalty, and repayment between stars and agencies must disappear first 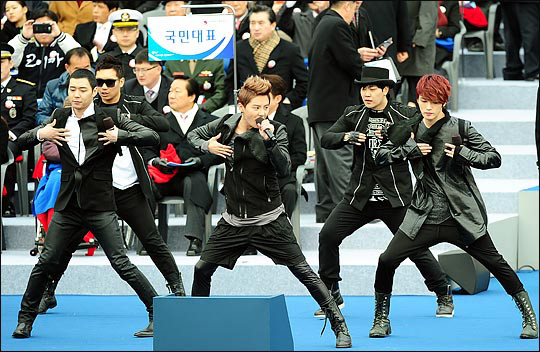 Agencies such as Sidus and SM prefer a method of division and specialization rather than such a vertical relationship. But this doesn’t mean that the decision process is perfectly horizontal and equally divided. Unlike the US, Korea’s entertainment agencies have a strong sense of possession rather than acting as an agent.

Ten years ago, when singers stood on stage at various awards ceremonies, the media was flooded with images of them crying and thanking their agencies’ CEOs. But these crying singers who expressed their gratitude have disappeared. Why did they cry and thank the CEOs then, and why have they disappeared now?

The singers couldn’t help but be thankful as these people were responsible for providing them with transport and housing, as well as allowing them to release album and appear on television programs, taking them to up to stardom. Were these agencies’ CEOs social philanthropists for providing an unlimited investment for these strangers and helping them attain fame and fortune?

But these grateful youths soon found out why these people had invested so much to train them. The act of discovering them, training them and helping them make their debut as stars was not an act of philanthropy, but for pure profit-making purposes. In the early 90s, SM had already invested over 3 billion Won in the debut of BoA, who was a fifth grader at the time. Of course, one can question if all that money really did go into helping her, but the bottom line is, they invested so much to the point that they were in debt. The Samsung Economic Research Institute (SERI) claims that BoA’s current value can be estimated at around 1 trillion Won.

During an interview, CEO Lee Soo Man of SM stated, “The budget for that project was 3 billion Won. But our company didn’t have 3 billion Won and had to borrow money. If I look back on what we did, I find it crazy that we did that, but it was something I really wanted to push forward.” According to data, other entertainment agencies invest around 2~3 billion Won for 4 to 5 years before and during their respective idol groups’ debut.

At least 400~500 million Won is invested in each person. Though it may be difficult to accept this value as it is the one that entertainment agencies release to the public, it is undeniable that a large sum of money is put into each person. The larger and more specialized an agency, the more money that is invested.

Their motivation behind putting themselves in debt and getting monetary investments to feed and clothe singers, and give them a chance to perform, is nothing but to collect profits. The moment when astronomical amounts of profits start coming in is also the moment when the gratitude turns to resentment.

Celebrities who are trained through various investments are considered the agencies’ assets. They cannot make the decision to move on by themselves. Because that is when they become disloyal beasts who bite the hand that feeds them. Slave contracts are just one of the risk hedges that agencies take on.

In the case that singers don’t become popular even though a lot of money and resources have gone into their careers, or if too much money has had to be used, agencies have to be able to extract that profit from them without them moving somewhere else. The reason why an unlawful slave contract exists, even when the profits are high, is because of a strong sense of possession that agencies have. The concept of ‘Because I made you what you are’ is very predominant.

This Korean reality can be seen in the possessive obsession that parents have on their children. Jang Yoon Jung’s disputes with her family is a clear example of this. If such obsession occurs in a family to such a degree, it must be worse in entertainment agencies. You can earn between 100 billion to 1 trillion Won if your initial billion-Won investment in an idol goes well.

This is the reason why they put themselves into debt, and push debt onto others. Because once a star rises, they bring in an exponential amount of profit. This strengthens the agencies need to bring in more for themselves. The stronger the belief that these singers are the products and possessions that the agencies created, the more unlawful the contracts become, at least, for the members in these idol groups.

In July of 2009, JYJ claimed that their exclusive contract with SM was unlawful and filed an exclusive contract nullification injunction. The contract period was 13 years, too long to be fair, and the income distribution favored the company too much. When JYJ left TVXQ, the Korean Federation of Pop Culture and Arts Industries (KFPCAI), which SM is affiliated with, sent an official notice to broadcasting companies and ordered them to not allow JYJ to appear on their shows. Pushed by the wish of the agency, the broadcasting companies accepted this request and didn’t allow JYJ to appear on their shows. JYJ were even stopped from airing their documentary and chased away from showing it in cinemas. They were unable to approach the public through the media. Although the KFPCAI’s influence reached the album and online music file distribution companies as well, JYJ sold over 300,000 copies of their first album. The reason why such an amazing feat could take place was because of JYJ’s domestic and international fans. The Fair Trade Commission (FTC) came to a verdict that found SM and the KFPCAI guilty of interfering with JYJ’s album distribution and broadcasted television appearances, and this was thanks to the active participation of JYJ’s fans.

Paradoxically, these groups of fans are formed through the resources and marketing of large-scale agencies. If they had not laid down a sturdy foundation, singers would not have been able to attract fans both domestically and overseas. This is the point that entertainment agencies drive home. On the other hand, agencies are not needed to create idols anymore like before. This is because the product rotation cycle in idol stardom has gotten very short.

The US agency system invests less energy in the training of talent. They have a model that takes people who are already on their way to becoming singers, and increasing their value to collect their profit. They are not of the mindset to start from scratch and perfect the package like Korea is. We cannot say which is right and which is wrong, but thinking of people as mere products and restricting them from gaining their own independence for the sake of profit is not an act of fair business transactions, but a violation of human rights.

Therefore, JYJ’s current predicament makes one wonder if Korea will be able to transition into the US agency model. However, the reason why the Korean model was able to create the Hallyu Wave is not because of this agency mentality, but because of a business asset mentality. The possession mentality has overpowered a sense of being the connector or representative.

A collective production process has its own pros and cons. It works in some markets but doesn’t work in others. If it stops working in the markets it used to flourish in, and is unable to expand into new markets, the Hallyu Wave will meet the same fate as Hong Kong movies. If profits don’t match expectations, regardless of the large sums of money invested into projects, and standard contracts are obeyed, investment capital will actually decrease.

We will have to wait and see if any broker-like agency models will arise in the 21st century that connect independent contents rather than producing and creating their own music. But this will only be possible if more opportunities are given to talented people to stand in front of the public and show off what they’ve got. Only then will independent contents, bolstered by each individual’s unique characteristics, be created.

Without such a thing, the tragedy of not being able to reach the public without getting along with certain people will perpetuate, creating even more inequality. Creative contents cannot be created in such an environment. “Let go of your obsession with your children. They are not your property.” Excessive affection and involvement will become a thing of the past. Loyalty and faith, gratitude and repayment will disappear as an outdated mentality.