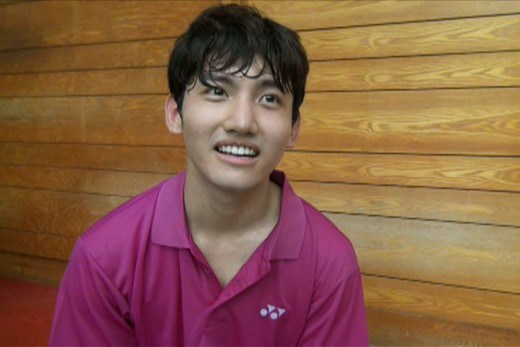 TVXQ’s Nissan Stadium Concert, which took both Korea and Japan by storm on the 17th of last month, ended in success. However, it was revealed that Max Changmin had been focusing most of his efforts on his badminton skills, right up till the concert itself.

The episode of KBS2′s ‘Our Neighborhood’s Master of Variety and Sports’ that will air on the 3rd will pit the celebrity team against a team in ‘Jeolla Northern Province’s Hwasoon’, the city of badminton that gave birth to Lee Yong Dae.

The episode will show Max Changmin practicing badminton ahead of his Nissan Stadium concert in Yokohama, Japan.

Ahead of a concert that attracted 144,000 people and made him a part of the first Korean group to hold such a large-scale performance, Max Changmin was completely focused on working on his badminton skills.

In front of the ‘Our Neighborhood’s Master of Variety and Sports’ camera, Max Changmin said, “I’m practicing badminton ahead of my concert,” and “I must be insane.”

Max Changmin’s love for badminton can be seen during the episode of ‘Our Neighborhood’s Master of Variety and Sports’ that will air on the 3rd at 11:20pm.