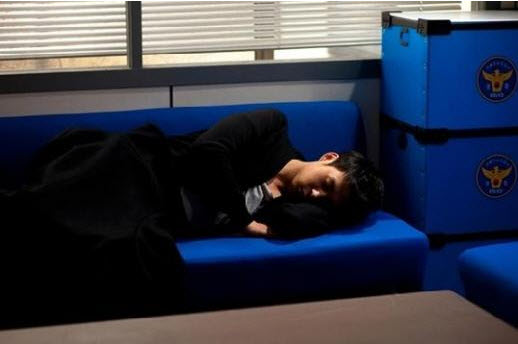 A photo of JYJ’s Yoochun napping has been revealed.

In the early afternoon of 5 December, a photograph of Yoochun was revealed via the JYJ official facebook, with the message “It’s Detective Han, who says he’s happy even if he only gets an hour or two of sleep a day! He says that the atmosphere on set is so warm and happy that he’s forgotten all about how cold it is^^” and “‘I Miss You’ will be greeting viewers 10 minutes earlier than usual today at 9.45! Don’t forget to tune in!”

In the image, Yoochun is on the set of the MBC Wednesday-Thursday drama “I Miss You”, lying on a small sofa and taking a nap. But despite his busy filming schedule, he is loving and enjoying his shoot for “I Miss You.”

Netizens who saw this said, “Mother, hurry and cover him with a blanket! Isn’t Yoochun sleeping?”, “He’s just sleeping but why does he look so good?” and other responses.