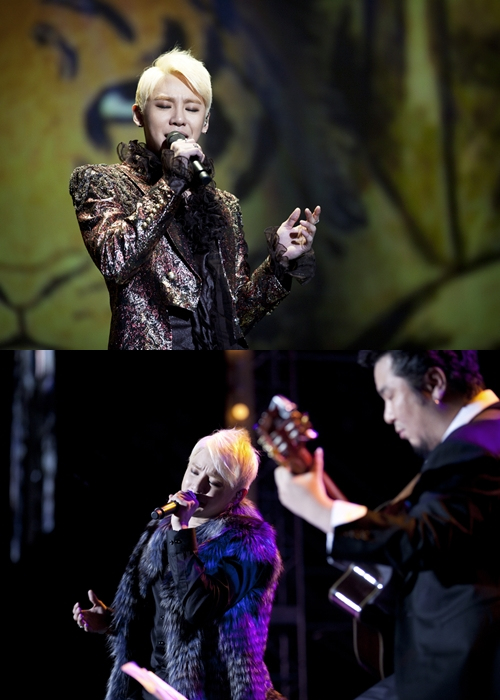 Kim Junsu held a solo concert from the 29th to the 31st of December in COEX’s Hall D that combined musicals with ballads. He reenacted musical numbers with a vocal chorus and an orchestra, and sang much-loved OSTs and ballads from his album with a pop chorus.

On the last day, Kim Junsu brought his mother on stage and sang ‘Dream of a Goose’ with her. Kim Junsu explained why the performance was so meaningful when he stated, “My mother used to get vocal training but she had to give up her dream of standing on stage because my grandfather was against it. When I was little, I promised her that when I became a singer, I would perform with her on stage. We were able to make that dream come true today and I hope that all of you never lose any of your dreams and I hope 2013 brings more happiness to you all.”

During his concert, Kim Junsu collaborated with an orchestra to sing selections from ‘Mozart!’, ‘Tears of Heaven’ and ‘Elisabeth’, and created an emotional gala performance with Kim Sun Young. Beginning with a musical theme, he sang much-loved ballads such as ‘I Don’t Like Love’, ‘Love is like a Snowflake’, ‘Though I Know’ and ‘Thank U for’. He also performed songs of other much-loved artistes such as ‘Because You’re My Girl’ and ‘Really’.

During his encore performance, Kim Junsu sang an acoustic version of his title song ‘Tarantallegra’ and after a stage change, he gave an impressive performance.

Kim Junsu (XIA) stated, “I believe that the greatest gift I can give to the people who love my music and come to my concerts is to do my best to give great performances. I’ve been so happy for the past three days,” and “I think I was able to go through the world tour and this end-of-the-year concert because I was certain that the people who loved my music would continue to keep an eye on me. I wanted to share that gratitude, and the heart-stopping emotions that I felt during the past year as I stood on stage with the audience, and I believe I accomplished that. The past three days have been so emotional and joyful for me.”