WHEN you are dealing with human rights issues, they cannot be resolved quickly unless either mutual respect on both sides leads to early resolution, or a timely process is employed to resolve the issues. In the case of JYJ against the established entertainment cartel, this is going to be a long, drawn-out process. I anticipated this was going to happen so I have always cautioned that the process was just beginning. Those of us who truly love our mancubs, not their bodies only, or their music only, but love their spirits, souls, and personalities will have to hold in and continue to pray for resolution that benefits the common good. I believe that Avex has been using JYJ and other artists to solve their money issues and to fufill their corporate goals with disregard for the artist’s human rights, as has SM and all of the United Management Companies, et al.. Artists are so much more than talent and box office appeal–they are human beings with desires and hopes of their own. It can be hard to work for years toward someone else’s dream. I have lived this. IN this particular case the disregard also extends to the people in need in Japan.

Let’s keep loving and supporting not SM, not Avex, not even C-Jes–just our guys wherever they feel the most comfortable. Love you, Jaejoong, Yunho, Yoochun, Junsu, and Changmin. Momma Cha

News: 110429 JYJ sues Japanese agency over cancellation of concert JYJ has filed a lawsuit in Japan against their management company AVEX Entertainment for interfering with their attempt to hold a charity concert.

JYJ, a boyband formed by former TVXQ members Kim Jae-joong, Kim Jun-su, and Park Yoo-chun after they filed a lawsuit against SM Entertainment for unjust contract, had planned a charity concert to aid earthquake-affected areas in Japan. However, the concert’s venues have canceled their contracts with JYJ after AVEX allegedly pressured them. 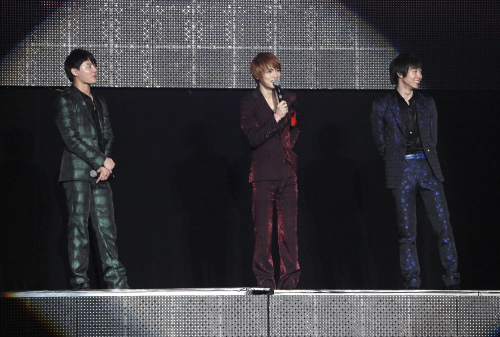 AVEX released an official statement, in which they do not deny the action. “Our company holds the exclusive rights for JYJ’s activities in Japan, and we have just taken actions against the infringement rightfully and properly,” AVEX said. They also claimed that they have received blackmails and threats due to the matter.

AVEX signed a contract with three members of JYJ in early 2010 after JYJ filed the lawsuit with SM Entertainment. A few months later, AVEX announced the “suspension of activities” of three members, arguing JYJ should refrain from promoting in Japan while legal proceedings against SM Entertainment were under way in Korea.

This “suspension of activities” has kept JYJ from conducting any promotional activities in Japan. Even after the suspension, however, AVEX has continued to make profits with products such as DVDs and JYJ footage.

Due to their ongoing lawsuit with their management company, JYJ has had difficulties in their activities in Korea as well. They have released an album, held concerts globally, and acted in dramas and musicals, but have had trouble getting airtime on television entertainment shows.

Another pop group, KARA, who also had three members embroiled in a dispute with their management company DSP for nearly 3 months, recently announced they have resolved the disagreement and will continue their career with DSP.