These actors, who are filming for the drama despite the temperature inching over 30℃and the continuous monsoon rain showers, are fighting the heat in their own ways. The burning summer heat is one of the worst troubles for actors and thick, black umbrellas are a must for actors filming scenes outside in order to escape the blazing sun. 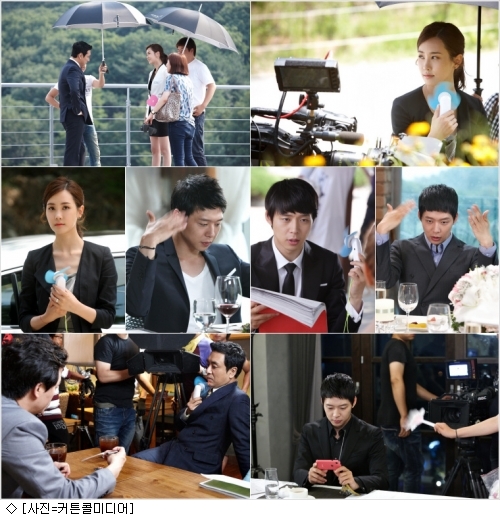 Lee Da Hae uses a thick, black umbrella to block out the sun while turning on a portable fan to cool herself down. It has been revealed that the cute and small portable electric fan is the item Lee Da Hae uses the most to survive the blazing temperatures. Whenever she’s waiting for her turn or taking a break, she has her fan turned on, chasing away the summer heat.

Kim Seung Woo is also another user of small, portable fans. To fit his title as a CEO of a hotel, Kim Seung Woo usually wears long-sleeved formal suits, meaning that he can’t help but feel scorched in the burning heat. Staff say that he has his fan turned on whenever he takes a break and cools his body down by drinking cool beverages.

Park Yoochun, who is more susceptible to summer heat than most, is having a hard time filming outside because he sweats a lot. The lighting crew sometimes fan him with their large reflecting plates while the staff members who move around with him fan his face continuously with their own fans. Whenever a scene is over, Park Yoochun fans his face with his own hands in an attempt to cool down.

The production company stated, “Though they face blazing temperatures over 30℃, the actors are working hard to film all their scenes as they fight off the summer heat,” and “They’re using various items such as portable fans and cool beverages to improve the completion of the drama. Please continue to watch over these actors who are doing their best.”