On 8 August, the SBS homepage released a large number of Kim Junsu’s performance cuts. Kim Junsu, who participated in the “Scent of a Woman” OST with “You are so Beautiful” also made an appearance as a character with the same name.

To shoot the scene in the drama for hallyu star Kim Junsu, a mini-concert was held. This was one of the items in Lee Yeon Jae’s list, to watch Kim Junsu in concert. He also had a 1-on-1 date with Lee Yeon Jae, where he displayed his charm.

During the concert, Kim Junsu performed “I can Soar” from JYJ’s worldwide album “The Beginning” as well as his Japanese single “Intoxication” and others, with approximately 500 fans turning up with placards and banners to support him, creating an atmosphere similar to a real concert. 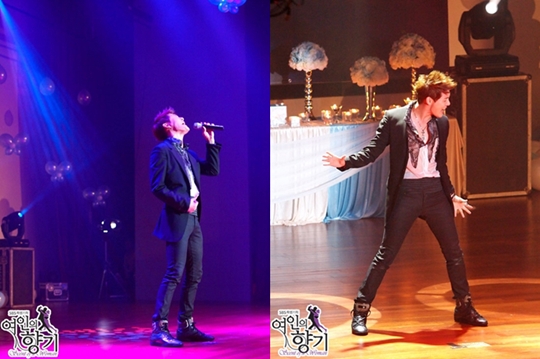 Netizens have requested for the concert performance video to be released. They said, “Please broadcast the full version of Intoxication,” “Can’t you reveal the full performance?” “I want to go on a date with Junsu like Yeon Jae did,” “I definitely had to watch the broadcast because of Kim Junsu,” and other reactions.