Posted on December 17, 2011 by TheRarasaurus

The drama DVD will be released in Japan in February 2012. Park Yoochun, who has been receiving a great amount of praise as an actor, shared his memories about his shooting process with us at The Banyan Tree Club & Spa Seoul,  the hotel where the outdoor shoots for “Miss Ripley” was done.

Acting while thinking about “The situation of a first love”

“The Song Yoohyun which I portray is innocent and doesn’t know anything about love, a person who mulls over his problems and doesn’t talk about it.” This is what Yoochun says about his role in “Miss Ripley.” As he explained, Yoohyun was born to a Japanese mother and Korean father, and his mother passed away when he was 9 years old. Following that, he studied at the University of Tokyo, and has the Japanese name Yutaka, as well as Korean name Yoohyun. His father remarried, and hoped that his son would take over the business. If this was a typical drama, the main character would be rebel against his father and refuse to take over the business. However, Song Yoohyun is a straightforward man who grew up in a proper manner, and it was probably because of this that he bumps into the beautiful Jang Miri at a student hostel in Seoul, and falls in love with her at first sight. His expression at that moment in time is probably a true expression of Yoohyun’s innocence, leaving a deep impression.

“The director said that to Song Yoohyun, Jang Miri is his first love, so he wanted me to express the emotion of being in love for the first time. However, when I was acting I was not thinking about my first love, instead immersing myself in the character of Yoohyun then expressing the emotion.” Compared to the innocent Song Yoohyun, female lead Jang Miri, despite living in a student hostel herself, felt that “men who are living in a student hostel must be poor,” so prior to knowing that he is a chaebol, always treated Yoohyun in a cold manner. To escape her bitter past, she lies that she is a graduate of the University of Tokyo, and starts working in a hotel. She dates both Kim Seung Woo’s character Jang Myung Hoon, and Song Yoohyun at the same time. Although she is the female lead, her role has a strong image of an “evil woman.”

“If it were me, I definitely wouldn’t be cheated by a person like Miri. As long as there is something slightly strange about his/her actions or words, I will be able to tell that it is a lie. Ah no, there are times which I can’t tell as well (laughs). If you were to ask if I was someone who would be easily cheated or not, do I look like the type who will be easily fooled? I feel that I haven’t really been cheated before, and can detect a lie at a glance. When chatting with staff, I can tell immediately if they are lying. If it’s being fooled by a girlfriend? Hmm… then maybe I won’t be able to tell (laughs). I think my mom would say “You’re still not there yet.”

Saying with an innocent face that he cannot be fooled, then saying that he might be fooled, Park Yoochun’s air of purity seems to fit well with the character of Song Yoohyun.

In the drama, Song Yoohyun falls in love with Jang Miri and expresses this directly. But considering it carefully, Song Yoohyun does not understand how Miri grew up, and her character. Furthermore, Miri showed no interest to him at first, treating him in a cold manner, pushing him away, and despite being treated this way, he fearlessly expresses his feelings for her. Even though Miri’s friend, Moon Hui Joo (played by Kang Hye Jung) expresses her interest in Yoohyun, he doesn’t waver at all.

“I think that anyone could fall in love at first sight. But whether that will lead to love, I don’t know. Personally, I hope that love can last for a long time, and develop slowly. Of course, if I meet someone I like, I will work hard to show her my charm. Song Yoohyun is a optimistic person, and we are similar in that aspect. But in terms of having a special method of “if you do this, you can definitely get the girl,” I don’t have that (laughs).

“To touch a person’s heart is really difficult. If you ask me what you should do to move someone, I don’t have an answer to that too.” 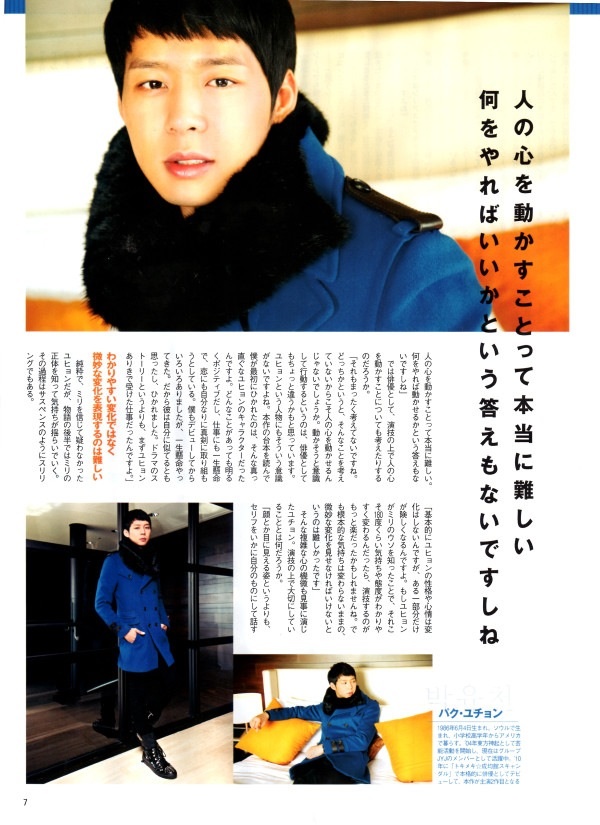 In that case, have you considered how you would need to touch someone as an actor?

“That is not something that I have really thought about. But that is to say, isn’t the fact that I haven’t really thought about it, the reason that touches the hearts of the viewers?  To do things with the aim of touching other people’s hearts, I think that as an actor, things are a little different.  The character of Song Yoohyun is like that as well, a person without such motives. When I was reading the script, what first attracted me to the role of Song Yoohyun was his completely straightforward personality. I am like that myself, and after my debut I was faced with all kinds of situations and I would always give it my all. Therefore, I felt that Yoohyun and I are very similar, and was attracted to him. Compared to the plot of the drama, it is more important to accept the role of Yoohyun.

It is not simple, obvious changes, but the expression of subtle changes that is very difficult.

Initially believing in Miri completely without any suspicion, Song Yoohyun finds out the truth about Miri in the second half of the drama, and causes Yoohyun’s world to shake. The suspense of this part of the show is thrilling. “Although Song Yoohyun’s character and mindset hasn’t changed, but a part of him has become cold. If Yoohyun had, after finding out about Miri’s lies, changed his feelings and attitudes completes, it would have been easier to express. However, to show no change in his basic emotions, and showing subtle differences instead is very difficult.”

Park Yoochun manages to express these complex yet subtle emotions well through his acting. In terms of acting, what are the points that he looks out for?

“Instead of just the physical appearance, and things that can be seen with your eyes, I focused on how to express the lines in my own way. For me, I am one of those “holds on to the script till the last minute, studying the script” types, but for this role, I placed more focus on how to blend Song Yoohyun’s character into my own.” During the filming period, there would also be times in his daily life where he would accidentally show glimpses of Song Yoohyun instead. “Song Yoohyun is always well-dressed, elegant and well-mannered.  So during the shooting, I naturally maintained good poise, and even the way I held my glass while drinking champagne was better than usual (laughs.) In ways like these, Song Yoohyun’s actions became part of my daily life.

Shooting at The Banyan Tree was difficult, but created many memories

Another point to look out for in this drama is Yoohyun’s crying scene.

“When reading the script, there were scenes where Yoohyun would cry. If it were me, I would not cry (at these scenes.) On the other hand, there were situations where Yoohyun would not cry, but I would feel like crying at. This made the actual shooting difficult. When I was reading the script, I felt like crying, yet I had to express a different emotion during the actual shoot. This is why acting is interesting, isn’t it.”

Even though the plot of the drama progresses in a thrilling way, there were many meaningful episodes that occurred during filming.

“Song Yoohyun works in a hotel, so we spent a lot of time in this hotel where we are at now, The Banyan Tree.  In the corridors of this hotel, we shot the scene where (Yoohyun) first met Kang Hye Jung’s character Moon Hui Joo, and that was a really difficult scene. This was the scene where Moon Hui Joo, who works in housekeeping spills cleaning detergent on Yoohyun. However, for this portion, the “detergent-spilling” scene was shot separately, and it wasn’t Kang Hye Jung, but the director of photography that poured the detergent on me. The director of photography had said with enthusiasm “This is what I’m good at,” (laughs) But the detergent got into my eyes, and it hurt a lot. Furthermore, the corridor we filmed at was really narrow and crowded with staff and actors, over 30 people, so it was really warm and unbearable, and just thinking about it is difficult.

My image in the first and last episodes are different, I hope that you can feel my progress.

For you, this main role in a drama is your second project after “SungKyunKwan Scandal.” Compared to the past, how do you think your mentality has changed?

As “SungKyunKwan Scandal” was my first time shooting a drama, I think the viewers were more accepting, or should I say that due to it being my first time acting so they were more kind and protective of me. However, with my second project, this is different. Although they are fans, the number of people who have a more critical eye on me has increased as well. This means that I feel more pressure. But because I really did work very hard on this drama, so if I were to be praised, I would be very happy.

Speaking truthfully, what is the charm of “Miss Ripley?”

I cut my hair at around episode 11. Actually, I was supposed to cut my hair once I started working at the hotel, but the timing wasn’t right. Actually, I think that I was a little fat when I had cut my hair short previously, and that was probably why my short hair was a failure. This is why I wanted to challenge (short hair) again, wanting to try it out in the drama. I think it suits me better now, what do you think? (Laughs) Seriously speaking, as this is my second project, I was acting with a portion of my mind thinking that my acting skills were still very weak. But acting with this constant need to work harder in mind, I’m thinking, “Comparing the first episode to the last, wasn’t I very different?” I want to show my progress to everyone, and this is what I wish to bring to my fans. 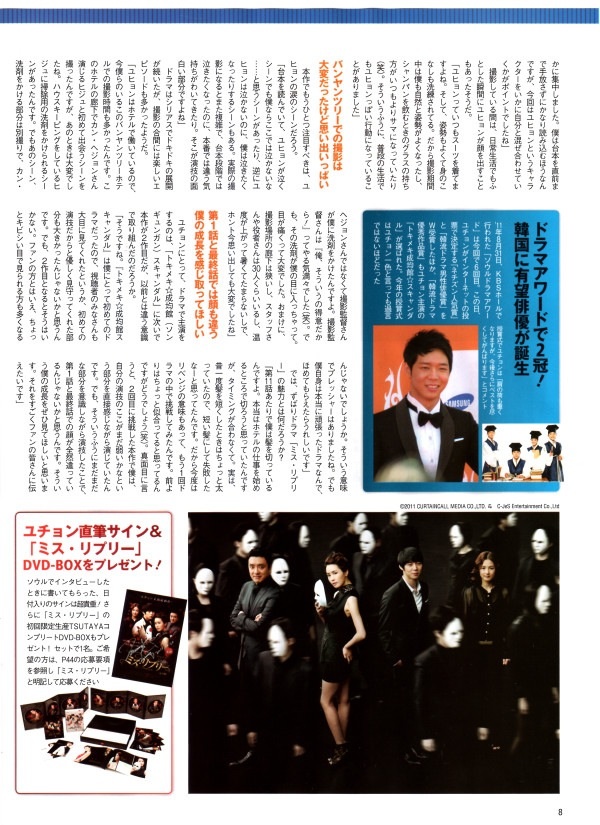