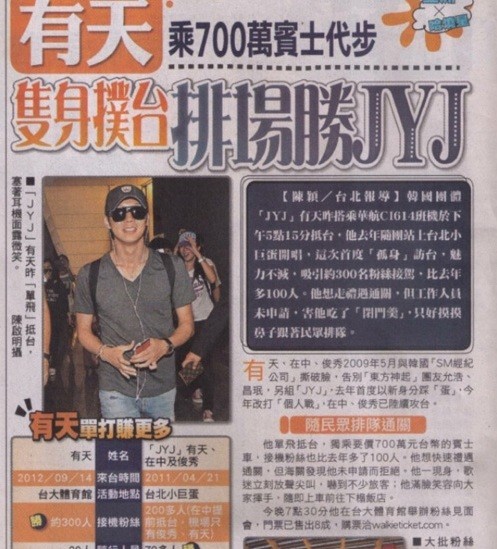 Park Yoochun successfully wrapped up his fan meeting in Taiwan.

On September 13, Park Yoochun of JYJ landed at the Taipei Airport where a countless number of fans and reporters were waiting for his arrival.

The couple hundred people who were waiting at the airport began to scream as soon as they saw Park Yoochun and over 20 different media sources were struggle to capture every moment of his arrival.

Recently, the SBS drama “Rooftop Prince” is highly popular in Taiwan. It has been reported that of all the dramas that aired after 2011, “Rooftop Prince” received the highest viewing rate and set a new record in Taiwan. Also, during a Taiwanese TV show called, “Yes Entertainment” and one other show, approximately 22,000 people were surveyed. When they were asked, “The best male drama character in my heart?” over 71% of the people chose Park Yoochun.

With about 4,000 fans in the audience, Park Yoochun spoke to them about his future plans as well as talking about filming dramas.

When Park Yoochun was asked to describe his ideal girlfriend, he answered, “Someone who is polite and kind.” After hearing his answer, the fans screamed out loud to show support. While talking about his acting career, Park Yoochun revealed that he wants to film a movie in the Great China Region. I would be a lot better if my little brother Yuhwan could be in the movie with me.”

All the fans who were present held their breath until Park Yoochun was finished speaking and screamed to show support as soon as he finished each statement.

Park Yoochun wrapped up the fan meeting with the statement, “I’m so happy to see my fans in Taiwan. I don’t think I will ever forget the warmth I felt from this fan meeting.”

Park Yoochun will wrap up his “2012 Park Yoochun Asia Tour” on the 16th of this month in Thailand.