‘Ranking princes’ JYJ have been chosen as the artistes Japanese women would most like to give chocolates to on Valentine’s Day. 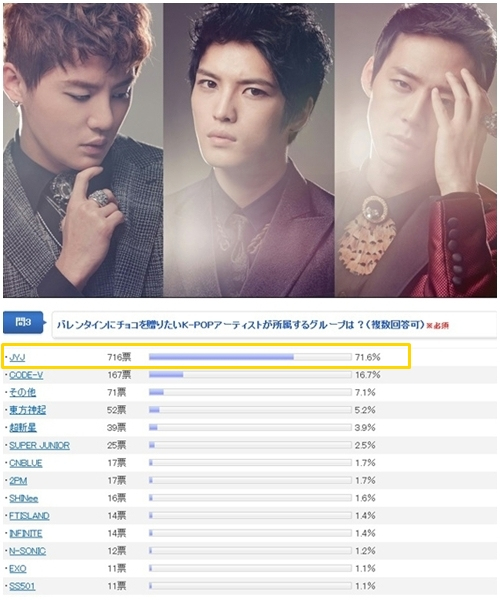 The Japanese Hallyu site ‘Mpost’ held a survey on the 31st of January labeled ‘Which Hallyu Group would you most like to give Valentine’s Day chocolates to?’ with 1,000 female Hallyu fans between the ages of 10 and 70. Kim Jaejoong, Park Yoochun and Kim Junsu’s group JYJ received 71.6% of the votes, topping the ranks with a landslide victory.

In the same survey that enquired about individual artistes, Kim Jaejoong, Kim Junsu and Park Yoochun came in at first to third place, proving just how popular JYJ are in Japan.

JYJ were followed by CODE-V, who made their Japanese debut last year, and TVXQ in second and third place. Others included in the rankings were Super Junior, Cho Shin Sung, and CN Blue.

Regarding the results, Mpost stated, “It was a complete victory for JYJ. It’s amazing to see how popular they are, even without any Japanese activities.”