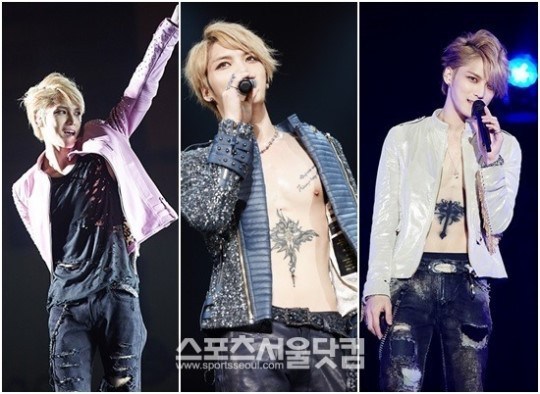 Having successfully held the Osaka leg of his Asia tour on the 17th and 18th of December, Kim Jaejoong is in the spotlight for his special concert outfits.

Kim Jaejoong designed the clothes he wore during his Asia tour, which took him to Thailand, China, Hong Kong and Taiwan this year. He had two more leather jackets created for his Yokohama and Osaka concerts, reflecting his passion to be as involved as possible.

Royal Sunday, the Swiss designer brand that put together the outfits, stated, “Kim Jaejoong wanted to create special outfits for his Asia tour, so he contacted us via Royal Sunday’s personalized design system to create stunning outfits for his concerts,” and “He’s always been interested in fashion, so we reflected all of his opinions into the designs to create a one-of-a-kind repertoire for him.”

Kim Jaejoong released his mini-album ‘I’ and full-length album ‘WWW: Who, When, Why’ this year, taking his first steps as a solo singer. His shocking visuals and rock music separated him from his JYJ activities, and won the hearts of the public. Having proven his popularity all across Asia through his tour, Kim Jaejoong will be returning to Korea in January to embark on his nationwide tour.

One thought on “[TRANS] 131223 ‘Down To The Last Detail!’… Kim Jaejoong Designs His Own Asia Tour Outfits”