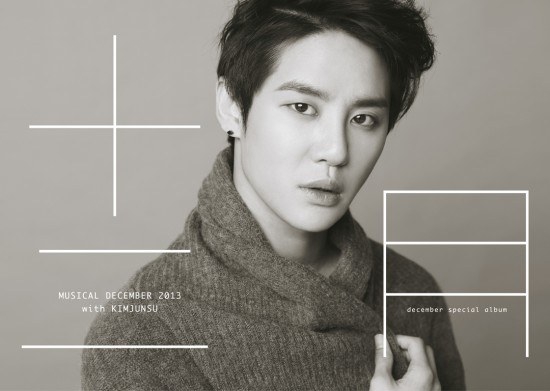 Kim Junsu, who will be on the stage as the leading role in a musical for the 50th birth celebration of the late Kim Kwang Suk ”December: The Endless Song,” will release a special album under the title of “Musical December 2013 with Kim Junsu” on December 18. Before that, on December 12, he will also pre-release a duet song “Passing by” with a singer Lyn!

The special album will be available for pre-order online from December 9. This album includes some of Kim Kwang Suk’s hits such as “Hope Love Is Not Too Painful” and “Letter of a Private,” as well as an unreleased song “December.”

The original musical song “Passing by” is Jinwook (Kim Junsu)’s theme song which will be put in the scene when he meets and falls in love with Lee Yeon. Kim Junsu’s resonant voice and Lyn’s sweet vocal will harmonize to complete this beautiful ballad song.

An insider commented, “Different from other musical OST releases, Junsu will be the first artist in Korea to release a special album with newly-edited songs.”

Meanwhile, the special album “Musical December 2013 with Kim Junsu” will be available for pre-order on INTERPARK and YES24. Musical “December” will start from December 16 at the Sejong Center.