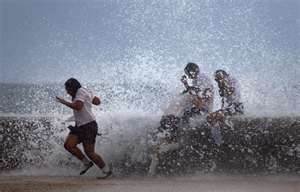 MIAMI (Reuters) – Hurricane Sandy, a late-season Atlantic cyclone that threatens to be one of the worst storms to hit the Northeast in decades, slogged slowly northward on Friday after killing at least 41 people in the Caribbean.

“We’re expecting a large, large storm. The circulation of this storm as it approaches the coast could cover about the eastern third of the United States,” said Louis Uccellini, director of the National Oceanic and Atmospheric Administration’s Centers for Environmental Prediction.

He stopped short of calling Sandy possibly the worst storm to hit the U.S. Northeast in 100 years, as some weather watchers were doing, but said Sandy was shaping up to go down as a storm of “historic” proportions.

The late-season hybrid storm has been dubbed “Frankenstorm” by some weather watchers because it will combine elements of a tropical cyclone and a winter storm. Forecast models show it will have all of the ingredients to morph into a massive and potentially catastrophic “super storm.”

In New York City, the global financial hub, officials were considering closing down mass transit before the storm hits.

Coming in the final weeks before the U.S. presidential election on November 6, the storm could throw last-minute campaign travel plans into chaos.

The Democratic incumbent was traveling to New Hampshire on Saturday, and on Monday was due to visit Youngstown, Ohio, and Orlando, Florida.

Craig Fugate, director of the Federal Emergency Management Agency, said he and the head of the U.S. National Hurricane Center had briefed the president on preparations for the storm on Friday morning.

“His direction to us again, as always, is to make sure we are prepared to support the states and the governors dependent upon the impacts of the storm,” Fugate told reporters.

Much of Florida’s northeast coast was under a tropical storm warning on Friday, and storm watches extended up the coast through North Carolina. Winds and rains generated by Sandy were being felt across much of Florida, with schools closed and air travel snarled in many areas.

Sandy weakened to a Category 1 storm as it tore though sparsely populated low-lying southeastern islands in the Bahamas late Thursday, knocking out power and blowing rooftops off some homes.

Some further weakening was forecast over the next two days, but the Miami-based National Hurricane Center said hurricane- or tropical-force winds were still likely by the time Sandy hits the U.S. coast.

Sandy’s driving rains and heavy winds were blamed for 41 deaths in the Caribbean, where landslides and flash floods were triggered by the cyclone.

The Cuban government said Sandy killed 11 people when it tore across the island on Thursday. The storm took at least 26 other lives in deeply impoverished Haiti and four people were killed in the Dominican Republic, Jamaica and the Bahamas.

The Haitian dead included a family of five in Grand-Goave, west of the capital Port-au-Prince, killed in a landslide that destroyed their home, authorities said.

The Cuban fatalities were unusual for the communist-ruled country that has long prided itself on protecting its people from storms by ordering mass evacuations.

Sandy was forecast to remain a Category 1 hurricane as it completed it passage over the Bahamas late on Friday, sending swirling rains and winds across areas including Florida.

It was moving slowly, however, making its final trek across the central and northwest corner of the Bahamas islands at 7 mph.

Many forecasters are warning that Sandy could be more destructive than last year’s Hurricane Irene, which caused billions of dollars in damage as it battered the U.S. Northeast.

Uccellini said he was reluctant to make comparisons with other storms. But he warned that a full moon on Sunday added to Sandy’s potential for destruction when it comes ashore in the United States.

“The lunar tide peaks two days after the full moon, and that’s Monday-Tuesday, which is exactly when the storm will be impacting the coastal areas,” he said. “We’ll have heavy rains and inland river flooding is a real potential here.”

Todd Kimberlain said Sandy was somewhat unique because of its integration with the polar trough over the United States. 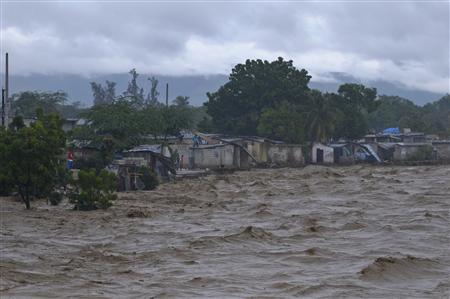 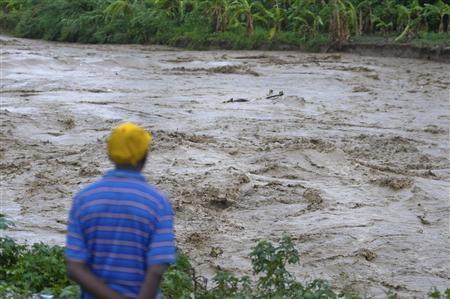 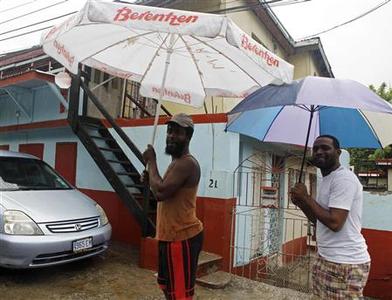 1 of 9. Heavy rains from Hurricane Sandy causes the Croix de Mission river to swell to levels that threaten to flood the homes along its bank in Port-au-Prince October 25, 2012.

Hurricane Sandy Barrels Toward US

East Coast residents are preparing for Hurricane Sandy’s arrival as forecasters expect a “perfect storm” of three different systems that will slam the region early next week.

New York City and northern regions in the eastern corridor are likely to be hit hard and forecasters are warning that the storm may linger for days as it covers a massive area. There is a 90 percent chance that on Monday the East Coast will take a direct hit, forecasters say.

“We don’t have many modern precedents for what the models are suggesting,” National Oceanic and Atmospheric Administration forecaster Jim Cisco told The Associated Press. “It’s almost a weeklong, five-day, six-day event. It’s going to be a widespread, serious storm.”

Sandy, currently a category 1 storm, will cross the Bahamas today as its western fringe scrapes eastern Florida, according to the National Weather Service. The storm is expected to slow and turn northwest overnight and during the day

As of 5 a.m., Hurricane Sandy was approximately 300 miles east of Miami and moving northwest at 13 mph. Florida is expected to see stormy conditions today, with 1-4 inches of rain in some areas. Waves up to 15 feet along the coast are expected, as is a storm surge 1-2 feet along the Florida eastern coat.

By Saturday afternoon, Sandy is expected to increase its forward speed and become a hybrid storm, pushing a lot of rain into the Carolinas and southern Mid-Atlantic region, with some areas getting more than a half a foot of rain through Sunday.

Sandy’s landfall is predicted to be somewhere in southern New Jersey on Tuesday around 8 a.m.

“I think it’s fair to say we don’t know when or if or where the storm’s going to hit,” New York Mayor Michael Bloomberg said at a press conference Thursday. “The forecasters say it could be dangerous, but I think a word that they’ve been using most is it’s unpredictable.”

Forecasters told The Associated Press that the storm could linger in the atmosphere over the same locations for five or six days, and that is could bring six inches of rain, 80 mph wind gusts, 20- to 30-foot-high seas and extreme coastal flooding.

The entire system will weaken by the end of next week as is sits over the northeast, but strong winds and rain will remain across the region through next Friday.