It is sad to see people caught up in evil who cannot be reasoned with or persuaded to see alternative ideologies. Osama bin Laden has seen an end come to his personal reign of terrorism on others. Sadly, this will not stop terrorism, for it is born of an evil source and has a long history–however, a huge influence and impetus has been removed from the arena. Throughout history there has been similar personality profiles–Adolph Hitler is just one example. There has been loss of human life on a monumental scale under bin Laden’s influence, including lives lost on September 11, 2001. I pray that this will slow down the momentum of Al Quaida and others to enable justice to prevail. Bullies seldom want to pay for their crimes which is why bin Laden preferred to die than to surrender. Others become victims of their actions such as women and children. I pray for the protection of this nation and the free world, and I also pray that our own methods and motivations would always be right.  Momma Cha

WASHINGTON — There was reaction from around the world on the killing of Osama bin Laden by American forces in Pakistan, from former President George W. Bush to victims’ families to senators to world leaders: 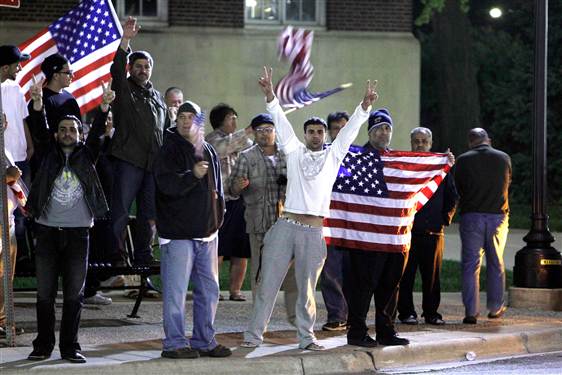 The Sept. 11 attacks were a defining moment of Bush’s presidency. He launched the war in Afghanistan and the hunt for bin Laden spanned the rest of his presidency. His statement:

“Earlier this evening, President Obama called to inform me that American forces killed Osama bin Laden, the leader of the al-Qaida network that attacked America on September 11, 2001. I congratulated him and the men and women of our military and intelligence communities who devoted their lives to this mission. They have our everlasting gratitude. This momentous achievement marks a victory for America, for people who seek peace around the world, and for all those who lost loved ones on September 11, 2001. The fight against terror goes on, but tonight America has sent an unmistakable message: No matter how long it takes, justice will be done.”

Bonnie McEneaney, 57, wife of Eamon McEneaney, who died in the 9/11 attacks
“It doesn’t bring back all the wonderful people who were killed 10 years ago. It’s long overdue.”

.Jack Lynch, 75, who lost his son, New York City firefighter Michael Francis Lynch
“The first thought I had in my mind was that it didn’t bring my son back. You cut the head off a snake, you’d think it would kill the snake. But someone will take his place. People like him still exist. The fact that he’s gone is not going to stop terrorism.”
“I understand that bin Laden was an evil person. He may have believed in what he was doing. I’m not going to judge him. I’m sure some people will look at this and they’ll be gratified that he’s dead, but me personally, I’m going to leave his fate in God’s hands.”

New York City Mayor Michael R. Bloomberg
“After September 11, 2001, we gave our word as Americans that we would stop at nothing to capture or kill Osama bin Laden. After the contribution of millions, including so many who made the ultimate sacrifice for our nation, we have kept that word.

“The killing of Osama bin Laden does not lessen the suffering that New Yorkers and Americans experienced at his hands, but it is a critically important victory for our nation – and a tribute to the millions of men and women in our armed forces and elsewhere who have fought so hard for our nation.

“New Yorkers have waited nearly ten years for this news. It is my hope that it will bring some closure and comfort to all those who lost loved ones on September 11, 2001.”

New York Gov. Andrew Cuomo
“The death of Osama Bin Laden is a historic moment that represents a major step in our country’s efforts to defeat terrorism around the world and should bring a sense of justice to the victims of 9/11 and his other attacks.

“We will never forget those who were lost, their families and those who risked their lives to save others.

.”New Yorkers endured Bin Laden’s most devastating and destructive attack, and his death brings back the horrific images and emotions of that terrible day. However, his death also reminds us of our strength, courage, and unity as a people in our response to his actions.

“The Administration’s vigilance and dedication to hunt down Osama Bin Laden has never wavered and I applaud their commitment to this cause. I also applaud our men and women in uniform who have fought tirelessly against terrorism and to defend freedom.

“The threat to our state and our nation unfortunately does not die with Osama Bin Laden. We must remain vigilant in preventing terror acts and continue to do everything to keep our state and nation safe and secure.”