By Dylan Stableford, Yahoo! News | The Lookout – 3 hrs ago 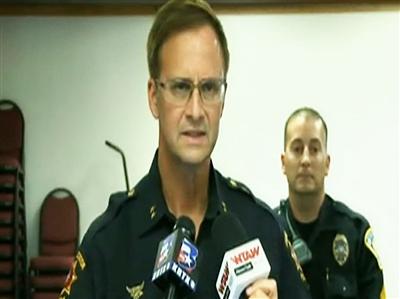 Three people, including a police officer and the suspected gunman, are dead following a shooting near the Texas A&M campus in College Station on Monday, police and university officials say. Four others, including three police officers and a female civilian, were wounded.

According to the College Station Police Department, the gunman was shot and taken into custody. The gunman later died, a police spokesman told the Dallas Morning News’ crime blog. A male civilian also died in the “gunfight,” police said.

The shooting began when an officer attempted to serve an eviction notice, according to WFAA-TV. That officer, Brian Bachmann, a 41-year-old Brazos County constable, was fatally wounded in the shooting, which occurred shortly after noon about a block away from campus.

“It appears that the shooter [was] shooting from a house with automatic weapons,” KBTX-TV said.

The other wounded officers are being treated for non-life-threatening injuries, the police spokesman said. The female civilian underwent surgery Monday; her condition was not released.

Texas A&M issued an alert on its website just before 12:30 p.m. local time on Monday warning of an active shooter near Kyle Field, the campus football stadium.

The shooting occurred near Highlands and Fidelity Streets in College Station, just south of George Bush Drive and east of the George Bush Presidential Library and Museum.

Monday’s shooting comes a little more than a week after seven people, including the suspected gunman, were killed in a mass shooting at a Sikh temple in Oak Creek, Wis., and less than a month after a gunman opened fire at Aurora, Colo., movie theater during a midnight screening of “Dark Knight Rises,” killing 12 and wounding 58.