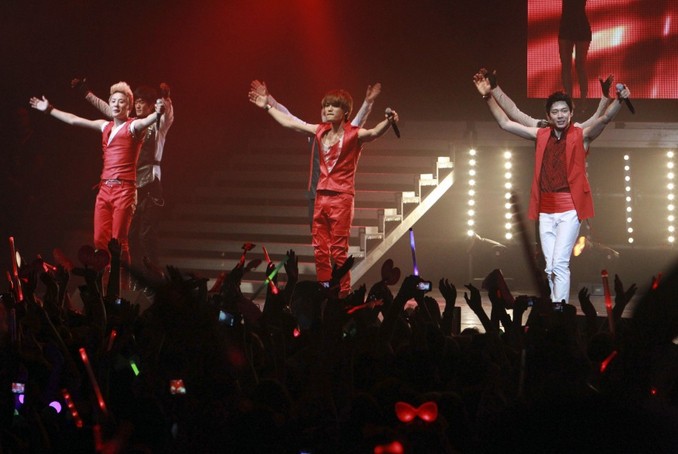 The JYJ Peru concert on March 11 at Estadio X Sur Plata Nada Monumental in Lima drew in more than 6,000 fans. The concert has drawn large interest as the trio became the first K-Pop artist to perform in South America.

The South America concert has been a part of JYJ World Tour Concert that began last April Bangkok, Thailand. The tour included stops in Taipei, Vancouver, Newark, Los Angeles, Barcelona and Berlin; total of 15 different cities and performed for 210,000 audiences.

C-Jes Entertainment announced on March 13 that the concert in Peru drew up to 6,000 fans. Fans had been camping outside over a week to await the boy’s arrival and the show. The dreams of the fans were met and yet fans have been reported to have been asking for more.

During the concert that lasted for 2 hours fans cheered and sang along JYJ’s hits like ‘Ayyy Girl,’ ‘Mission,’ ‘Be The One,’ and more. There was reportedly 10 fans that fainted due to exhaustion.

The South America portion of the concert was held in Chile and Peru has been making headlines all over the local media as well as other parts in the world.

After successfully concluding the performance in Chile with 3,000 fans on March 9, the trio flew over to Jorge Chavez International Airport in Lima where over 3,000 fans have been waiting for JYJ’s arrival.

Surprisingly this large unprecedented number of fans waiting at the airport wasn’t the first sign of the excitement and craze over JYJ. The first whim was back in January when the concert tickets of both Chile and Peru broke records sale. Due to the overwhelming demand of fans the Peru concert added an additional 1,000 tickets that were sold out immediately.

With the completion of their successful World Tour concert, fans are awaiting expectantly already of their next tour.

C-JeS Entertainment CEO shared, “JYJ will focus on their album and individual activities for now. The group will release a second English album, in the second half of the year.”

The K-pop wave seems to be writing new history and breaking records wherever it lands.