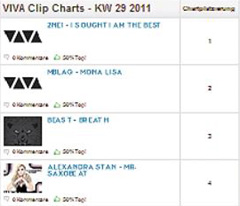 The growing popularity of K-pop bands in Germany indicates that the Korean Wave may have finally made its way to Western Europe.

According to the VIVA Online Clip Charts, girl group 2NE1′s recently released song “I Am the Best” ranked top of the charts this week. This was followed by “Mona Lisa,” by boy band MBLAQ, and Beast’s “Breath.” Songs by 2PM, Super Junior-M and Big Bang also made their way into the top 100.

The VIVA chart is compiled by German music TV channel VIVA based on the number of downloads and music video hits the songs receive online. The station is equivalent in clout to MTV in the U.S., and is in fact now under the management of MTV following a recent acquisition and merger.

VIVA News reported on Wednesday that K-pop, a new force to be reckoned with in the mainstream music industry, has recently moved beyond Asia and into Europe. It said this is similar to what happened in the 1990s with Japanese music, when J-Pop became hugely popular around the world. One of the key to K-pop’s success, it said, is the attractive looks of its singers, many of whom have undergone cosmetic surgery.

“K-pop idol groups such as Beast, 2NE1, TVXQ, MBLAQ, Super Junior and Big Bang were modeled after boy bands and girl groups in the West,” it reported. “Korean management agencies, notably SM Entertainment, discover young talents and nurture them into becoming highly successful groups. Many Korean groups are immensely popular in Japan, so they sometimes sing in Japanese.”

Meanwhile, JYJ, another local boy band, has expressed its wish to hold a concert in Germany at either the end of October or in early November, the Korean Embassy in Berlin said.

▲ The constant blocking and curtailing of JYJ’s activities is only exposing to the international community and international consumers of the Korean Wave the state of underdevelopment of the Korean entertainment business and broadcasting structure. The photograph above shows many of these fans and consumers at JYJ’s New York showcase waiting in excitement.

In October of last year, the Korean Federation of Pop Culture and Arts Industry (KFPCAI) stated in an official letter sent to all national mainstream and cable TV stations, “The broadcasting of JYJ will have a negative effect on the Korean Wave as well as the image of its cultural contents industry and the Korean nation behind the Korean Wave,” and that “it will lead to the regression of pop culture and the Korean Wave,” thus urging all recipients to ban the appearance of the group. Yet, four months after that incident, this past February, JYJ’s foreign fans warned, “We the international consumers of the Korean Wave reiterate our unwavering support for JYJ and urge their nation to secure justice for her own citizens or else risk forever marring her cultural products with the stigma of human rights violations.”

That day was the day after cable channel QTV had publicised its decision to cancel JYJ’s reality programme ‘JYJ’s Real24’, which detailed the members’ daily lives, and two days after some 86,000 foreign fans of JYJ submitted a petition to the Fair Trade Commission and the Seoul Central District Court.

JYJ’s foreign fans declared, “QTV’s behavior is unprofessional, irresponsible and unacceptably disrespectful to its viewers and the laws of its own country”, unable to hide their regret and disappointment at the situation. They also noted, “QTV announced that it had cancelled JYJ’s reality show, JYJ’s Real24, after creating significant reliance interests for viewers by advertising through multiple channels that it would air the show within February” and that “such acts represent contempt for JYJ’s entertainment activity rights, which have been twice affirmed by the court.”

On February 28th, JYJ’s foreign fans submitted a petition to the Seoul Central District Court and the Fair Trade Commission, urging for the recognition and protection of JYJ’s legal and human rights. Signatures were collected from February 2nd to February 25th through a site set up in 10 different languages, asking for a timely ruling recognising JYJ’s rights and guaranteeing their media activities.

[Foreign fans] commented on the negative events closing in on JYJ and their practical hardships, “As consumers of the Korean Wave, we would like to express our disappointment in these violations of JYJ’s legal and human rights which have had a negative impact on our understanding of Korea and our appreciation of her cultural products.” It is clear that all this is communicating/exposing to the international community and the consumers of the Korean Wave the backwardness and close-mindedness of the Korean entertainment business and broadcast system; it is enough to make one blush [with shame].

It makes one wonder how absurd is that state of Korea’s entertainment industry that foreign fans are accusing its current state with words such as “the Republic of Korea must take action against such unashamed disregard for her laws.” This is clear evidence that, on the contrary, it is those who are standing against JYJ who are staining the reputation of the Korean Wave.

The public now demands of them.

Who is the real culprit disgracing the Korean Wave!

Translation by: Jimmie of TheJYJFiles

Please do not add/remove credits