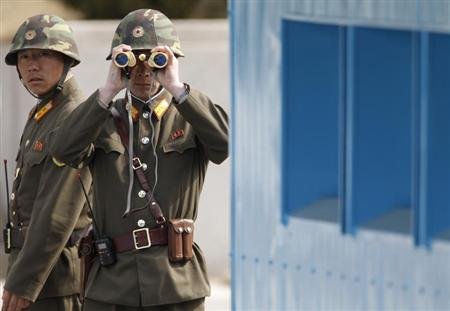 Reuters/Reuters – North Korean soldiers look to the South as they patrol at the truce village of Panmunjom in the demilitarised zone separating the North from South Korea in Paju, about 55 km (34 miles) north of Seoul March 19, 2013. REUTERS/Lee Jae-Won

By Christine Kim and Joyce Lee

SEOUL (Reuters) – North Korea intensified threats of an imminent conflict against the United States and the South on Tuesday, warning foreigners to evacuate South Korea to avoid being dragged into a “merciless, sacred, retaliatory war”.

The North’s latest antagonistic message belied an atmosphere free of anxiety in the South Korean capital, where the city center was bustling with traffic and offices operated normally.

Pyongyang has shown no sign of preparing its 1.2 million-strong army for war, indicating the threat could be partly intended to bolster Kim Jong-un, 30, the third in his family to lead the reclusive country.

None of the embassies in Seoul appeared to have issued any directives to their nationals after the warning and airlines reported no changes in their schedules. Schools catering to foreign pupils worked without interruption.

The warning, read out on North Korea’s state television in a bulletin that interrupted normal programming, was the latest threat in weeks of high tension following U.N. sanctions slapped on Pyongyang for its latest nuclear arms test.

It followed the North’s suspension of activity at the Kaesong joint industrial park just inside North Korea, all but closing down the last remnant of cooperation between the neighbors. North Korean workers failed to turn up on Tuesday.

North Korea had said South Korea was trying to turn the Kaesong complex into a “hotbed of war”.

The warning to foreigners, reported by the KCNA news agency said once war broke out “it will be an all-out war, a merciless, sacred, retaliatory war to be waged by (North Korea).

“It does not want to see foreigners in South Korea fall victim to the war,” the agency quoted the Korea Asia-Pacific Peace Committee as saying.

“The committee informs all foreign institutions and enterprises and foreigners, including tourists…that they are requested to take measures for shelter and evacuation in advance for their safety.”

Last week, North Korean authorities advised embassies in Pyongyang to consider pulling out in case of war, though none appeared to have taken any such action.

Speculation has grown that the North would launch some sort of provocative action this week — perhaps a missile launch or a fresh nuclear weapons test.

A government source in Seoul said a North Korean medium-range missile, reported to have been shunted to the east coast, had been tracked and was believed to be ready for launch.

“Technically, they can launch it as early as tomorrow,” the source said.

But a U.S. embassy official in Seoul said a directive issued last week saying there was no imminent threat to Americans in South Korea remained valid. “Our workers are in all our offices today,” he said. “We have not evacuated anyone.”

A Philippine foreign ministry spokesman quoted diplomats at its Seoul embassy as saying the situation “remains normal and calm”.

Stocks, which had fallen 4 percent over the past four days, edged higher on Tuesday despite the warning to foreigners. The won currency moved little, dipping slightly after the North Korean statement.

Employers at the Kaesong complex faced uncertainty as the 53,000-strong North Korean workforce stayed away. A spokesman for textile company Taekwang Industrial and at least two other firms said production had stopped.

About 475 South Korean workers and factory managers remain in Kaesong, which generates $2 billion in trade for the impoverished North. The Seoul government said 77 would return on Tuesday.

North Korean workers at the park have appeared increasingly agitated in recent days, refusing to talk to their colleagues.

Many Southerners connected with the park bedded down at budget hotels in a nearby South Korean town in the hope that an order would come from the North to re-open.

“I have been feeling anxious now and then. Now it’s really preposterous facing this,” said Shing Dong-chul, 55, a South Korean worker who transports wire made in Kaesong.

“North Korean workers didn’t talk a lot, but they appeared to have complaints about Kaesong being closed. They worried whether they would be working or not.”

The zone is practically the last vestige of the “Sunshine Policy” of rapprochement between the two Koreas and a powerful symbol that the divided country could one day reunify.

South Korean companies are estimated to have invested around $500 million in the park since 2004.

World leaders have expressed alarm at the crisis and the prospect of a conflict involving a country claiming to be developing nuclear weapons.

China, the North’s sole diplomatic and financial ally, issued a new call for calm and restraint, though Beijing’s leaders have shown increasing impatience with Pyongyang.

“We ask all the relevant sides to bear in mind regional peace and stability and earnestly protect the legal rights and safety of citizens,” Chinese Foreign Ministry spokesman Hong Lei told a briefing.

A Russian foreign ministry spokesman, in a statement on the ministry’s website, said Moscow was in solidarity with all G8 industrialized countries “as regards the rejection of Pyongyang’s current provocative and bellicose line of conduct”.

The North is also angry at weeks of joint U.S.-South Korean military exercises off the coast of the peninsula, with B-2 stealth bombers dispatched from their U.S. bases.

But the United States announced the postponement last weekend of a long-planned missile launch, a move officials said was aimed at easing tensions on the peninsula.

U.S. Secretary of State John Kerry visits Seoul this week and the North holds celebrations, and possibly military demonstrations, next Monday to mark the birth date of its founder, Kim Il-Sung – the current leader’s grandfather.

In Washington, U.S. Deputy Defense Secretary Ashton Carter urged China to use its influence with the North and said Moscow wanted similar action from Beijing.

But Chinese criticism of North Korea is unlikely to mean tough new action against Pyongyang because China would see any collapse of its troublesome neighbor as a disaster.