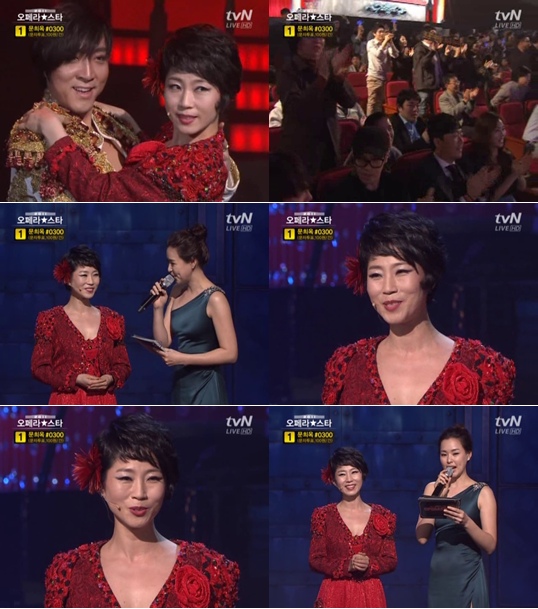 ‘Trot singer’ Moon Hui Ok was able to create a perfect performance with the help of TVXQ’s support.

Moon Hui Ok sang ‘The Joyful sound of the Triangle’ on tvN’s ‘Opera Star’ that began airing at 11pm on the 16th.

For her performance, she showed a completely new image of herself as she wore a red dress and transformed into an allluring gypsy. Her passionate choreography also stole the attention of the audience.

The judges critiqued that though Moon Hui Ok was slightly lacking in terms of pronounciation and expression, her overall performance was excellent.

On this episode, Tei was chosen as the most popular star for the second week in a row while Sunday was eliminated.

Idol craze has grown stronger in musical industry. These idols usually have strong ticket power as shown by Kim Junsu who sold out all tickets of his musical starring ‘Tears of Heaven’. There are more than 20 names of idols that have ventured into musical industry.

However, as they’ve been under gazes of many musical critics, most performances of these idol turn musical actors were not highly praised. There’s been debate of the fact that despite the unproven acting skill, these idols still get many notable roles. Therefore since the 28th last month to March 13th, Kukinews held a survey to 11 musical critics and producers to assess the skills of ‘musical idol’. The positions will be decided through 4 categories: acting, singing, marketability, and growth potential where for each category there will be 2 chosen names, at which the first rank will be graded with 3 points and the second rank gets 2 points.

Idols who are chosen in skill category are Kim Junsu, ONew, Kyuhyun, Taeyeon, and J (sorted based on ranks). Yet some respondents said, “None of them has the skill that can be evaluated,” and returning a blank paper.

Kim Junsu who swapped 1st in all areas, received particularly good marks on marketability and singing ability. ChungKang Culture Industry University Professor Jin Jeong-hoon said, “Kim Junsu has proved himself as a musical star through his role in ‘Mozart!’ and ‘Tears of Heaven’” However, “His vocal range is limited so traditional classic works will be difficult for him.” The professor further pointed out, “His vocalization is also peculiar and he lacks in ability to communicate the lyrics.”

Regarding Kim Junsu’s acting skill, Dankook University Professor Yunho-jin commented, “While there are still few lacking in some parts, but his ability to instinctively grasp the stage is remarkable,”

Kim Junsu got the vote of 6 people as an idol who shows potential to become next musical idol star. Seoul College of Arts Professor Wangyongbeom said, “He seems to have potential to be loved by public in the future as shown by the sold out performances of ‘Mozart!’ and ‘Tears of Heaven’. But he has assignment now to choose another good musical work hereafter.”

A musical producer who asked to remain anonymous, “The growth of potential depends on practice. Eventhough he/she is an idol singing star, but if he/she’s failed to practice in musical basis, it would be the beginning of a cloudy performances of him/her. But the main problem of these idols are, they have their main work to focus on as well (that cause the lack of musical-base practice),”

‘Musical idol’ is undoubtedly contributing positively to the popularity of musical. This fact shown on the increase of foreign tourists from Japan, China, and more to attend musical performances.

Fans of these idols are claimed to be the source of this musical idol’s ‘ticket power’. Kim Junsu, for instance, sold out the whole of his 17 performances (26,000 seats), while ‘Legally Blonde’ starring SNSD Jessica and ‘Song of The Sun’ starring fellow member Taeyeon all at least become a break even. Therefore although their title is still a ‘rookie’, these musical idols receive at least 1.5 times higher fee than those musical veterans.

ChungKang Culture Industry University Professor Yuri said, “Sometimes musical performance appointed idols to star on their works merely to grab more and more audiences without any consideration to create a high level and good taste performances, this could dropped the quality of musical in the long term that leads to the loss of audiences at the end.”

I really can’t believe that these crtics are evaluating the K-Pop music stars by opera standards. The genre is light opera that will attract the “common people” and allow them to grasp a taste of musical drama. As a vocalist I find it rather refreshing, and Junsu gets my first vote, then, Onew and Kyuhyun. 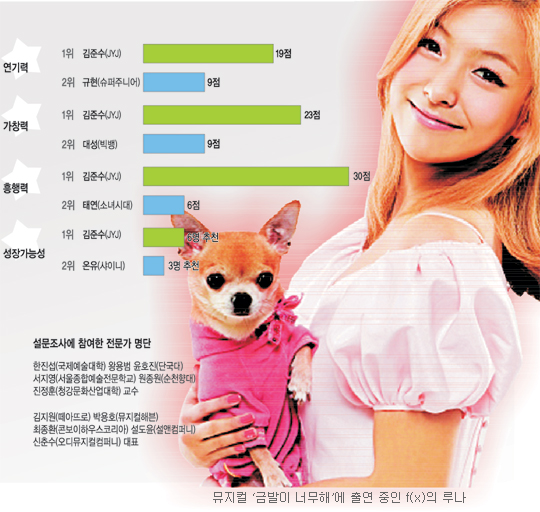