This is a 1980 classic Christmas to New Year song. The artist, Dan Fogelberg, is no longer with us, but his artistry lives on.  <3 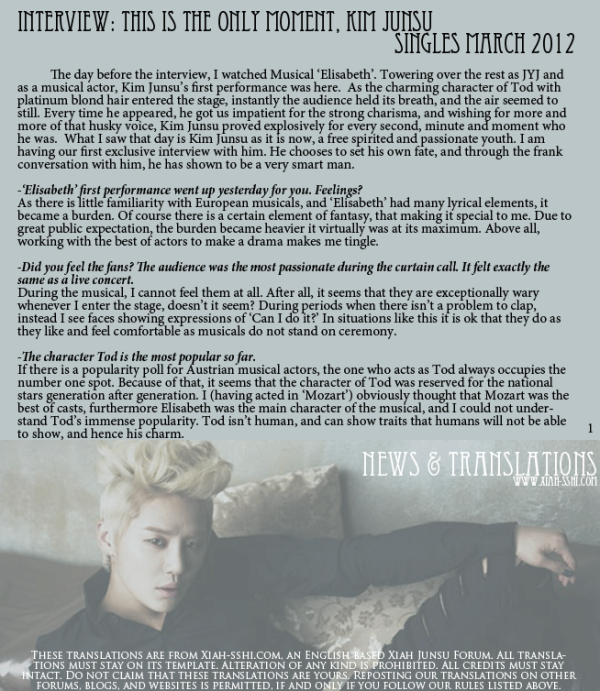 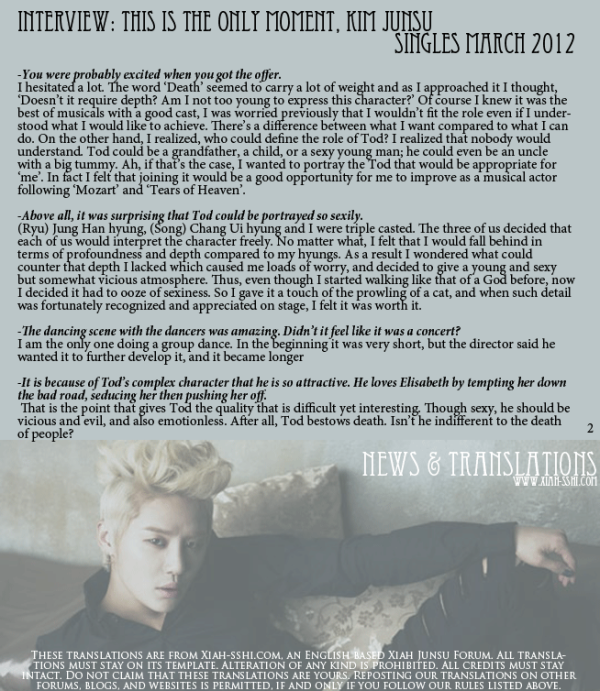 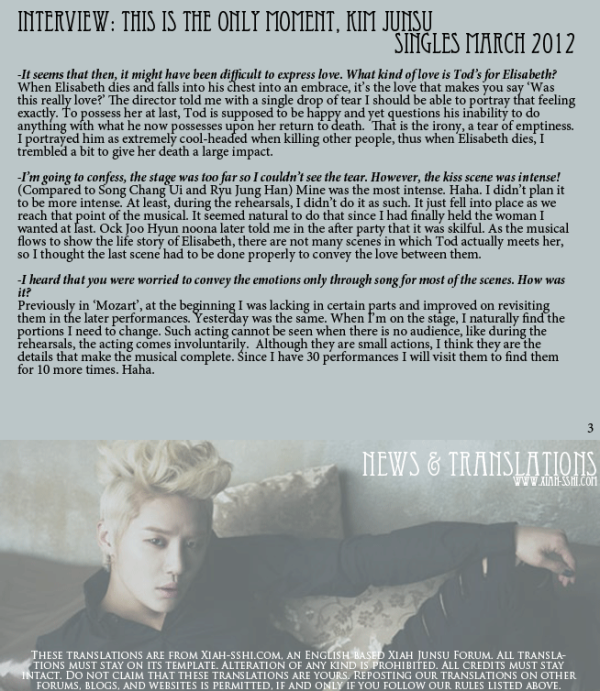 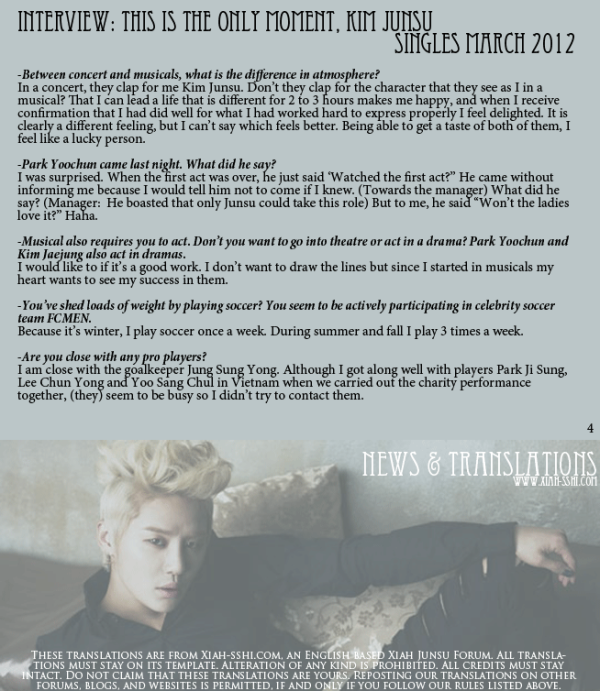 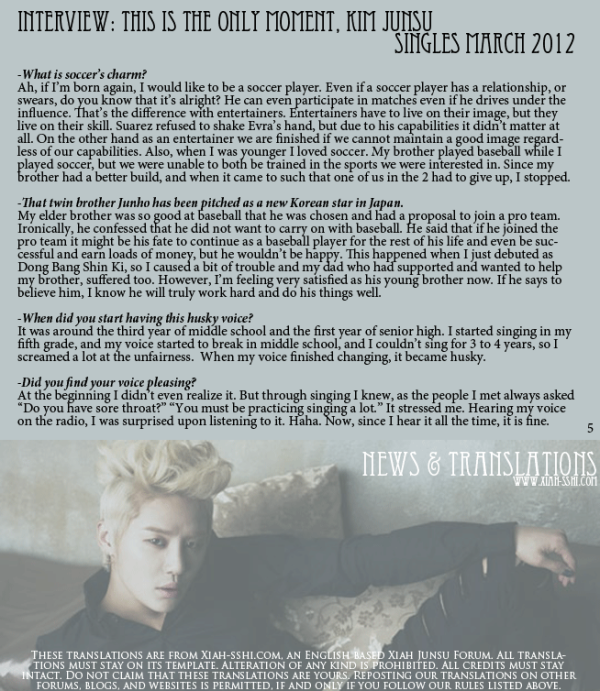 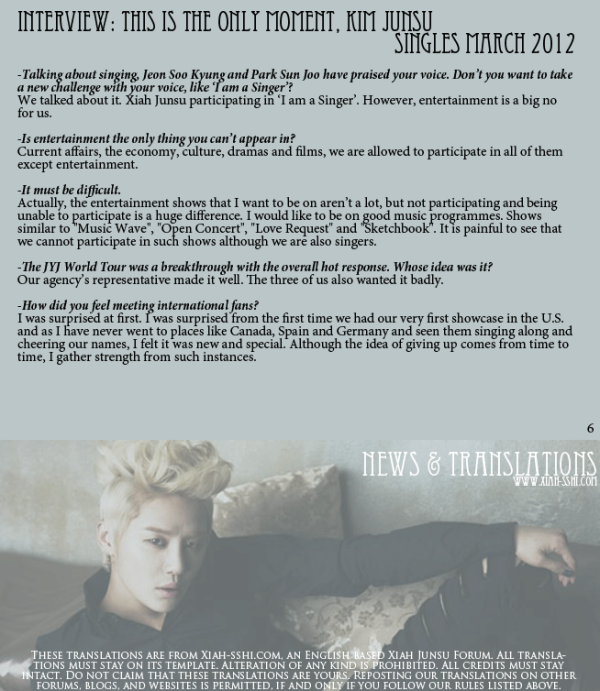 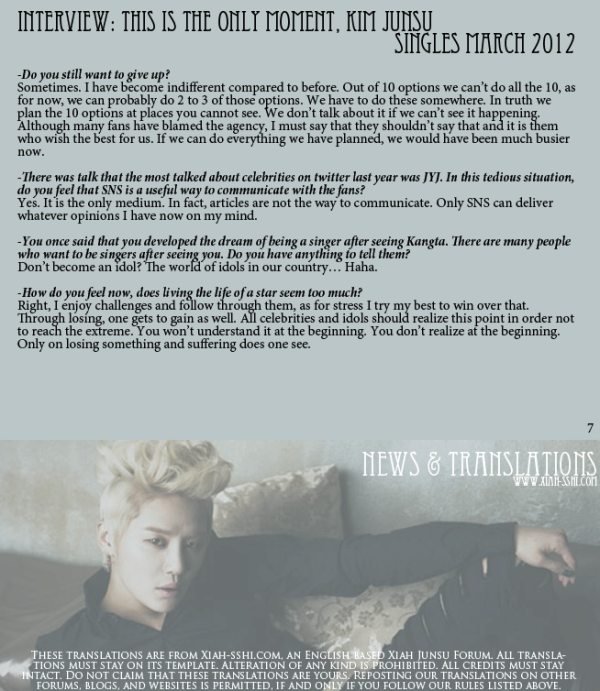 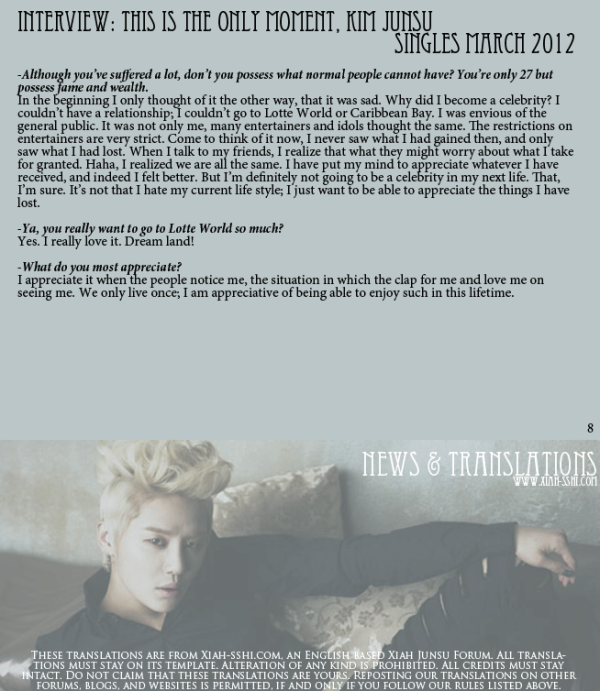 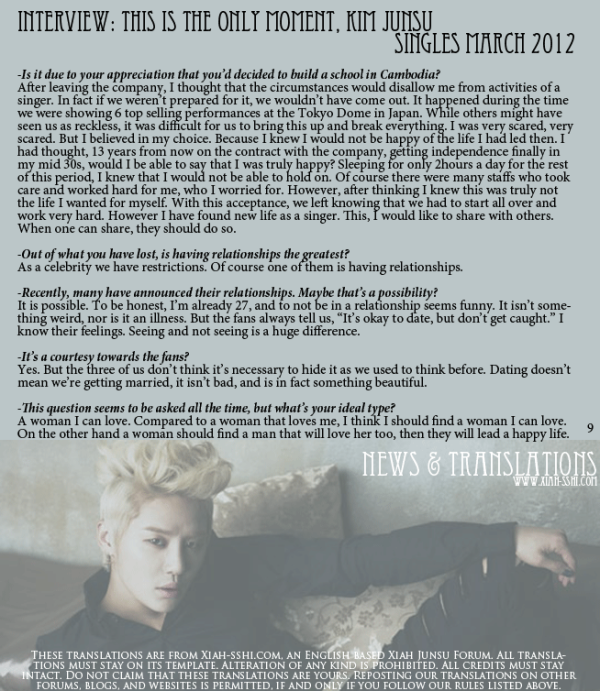 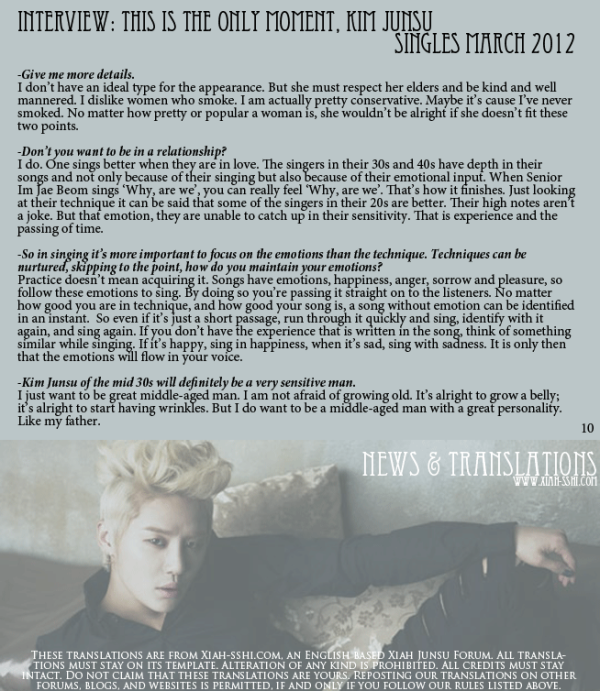 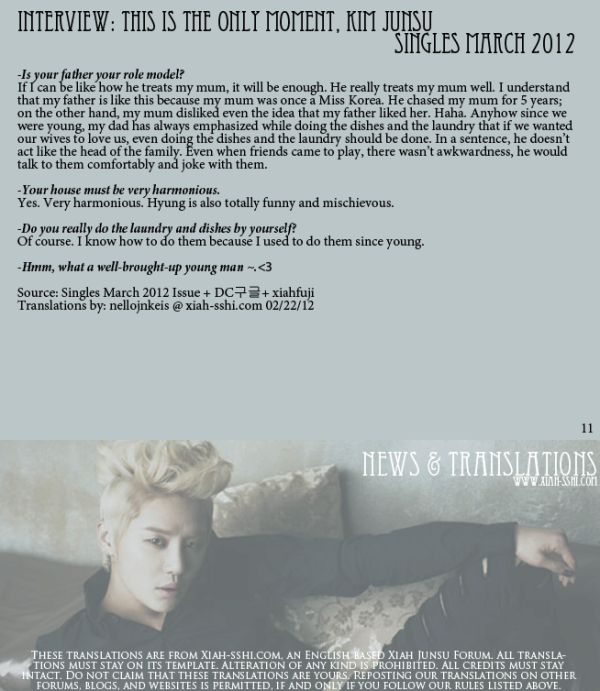 [Trans] 111124 Changmin (Tohoshinki), With A Girl He Likes, “My Approach Would Be Instinctive, Just Being Myself” 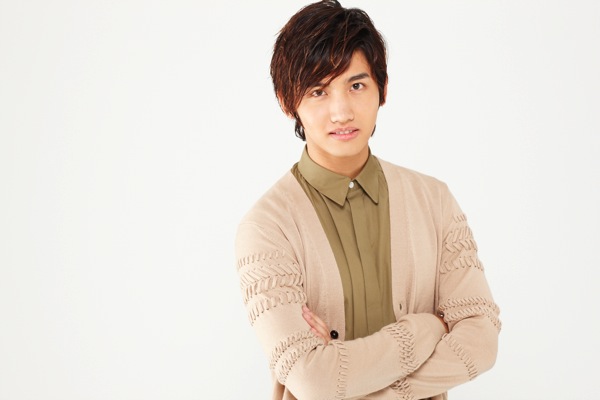 With this, Changmin, who is acting as the lead in a drama for the first time, talks about his feelings when acting in this show, his favourite scenes, his ideal type of girl and newlywed-couple life in relation to the drama, his approach towards girls as well as the episode where Yunho visits him on set, in this official interview which has finally arrived.

This is your first starring role in a drama, please tell us how you feel about your acting.

As drama is my first project, before the shooting I was already nervous. This is a kind of work I have never ever done before, so it was difficult. But when the shooting started, I got used to it after a while, and I could have fun with it. The location for the filming was really nice, so that was great too. As for the show, as this was my first challenge so I can’t say that I was confident but compared to my initial acting, thinking “If I did it this way, wouldn’t it better?” was how I decided to look at this.

How did you take on the role of Dong Joo?

I watched similar dramas, and observed characters that were similar to Dong Joo. I studied Korean dramas with contents about arguing with your partner and unknowingly coming to like the other person, such as  “Fantasy Couple” and “Alone in Love.” I also searched for similarities between myself and Dong Joo, and tried to express that.

What are the similarities between yourself and Dong Joo?

Being straightforward in expressing our feelings, and being short-tempered, probably (Laughs). Dong Joo’s emotions fluctuate a lot, and I’m that type as well, and since we’re similar in that way, it was easier to act it out and that was good. Of course, I can’t say that Dong Joo and I are totally the same, but I don’t there was anything that was completely different about the both of us.

Please tell us if there were any scenes that were your favourite, or any lines that left a deep impression on you.

The scene were Dong Joo was changing clothes in Da Ji’s house. Da Ji came into Dong Joo’s room, and said “My father is coming so you have to hide!” This hiding scene. It was an interesting scene to act in. Even though I was half-naked (Laughs), it was a really comical scene so I really enjoyed it.

What was difficult (about shooting the drama)?

The shooting started in winter so it was really cold. In terms of scenes, it was the scene where I was calling my mother while drinking. I’ve never acted drunk before, but I was actually drinking wine as we did the shoot. I was drinking all the way since the morning, and I ended up drunk and that was really difficult. (laughs). However, it was a good experience.

I think that as Dong Joo and Yeon Hee are first loves, and they couldn’t do anything, and couldn’t do without each other, a mutually-dependent existence.  They are young so they are optimistic and passionate, but I don’t think you need to keep being that way. For me, although it is important to treat your partner kindly and consider their feelings, having a friend-like relationship is good. Although we will argue, be it going out and having fun, or interests and other things should be shared as well. As for my ideal girl, a reliable girl would be good. This job (of mine) is full of instability, so I think that having a girl who can help me remain composed would be great. Someone feminine and cheerful would be nice.

Dong Joo wavers between Yeon Hee and Jin Young, but for you (Changmin) who would you pick between the two of them?

To be honest, I want to add the both of them together then split it into half (laughs). Basically, I don’t want to give up either of them. Jin Young is a woman that any man would yearn for. She’s a good career woman, and initially it wasn’t the case by in the end, she helps to protect Dong Joo. This kind of woman is probably the dream of any man. For Da Ji, compared to Jin Young, she has more energy and is not as feminine but more…like an auntie? (Laughs) However, for me, that is her charm, and I feel that she is very reliable. Even though they aren’t sure of their mutual feelings, aren’t they still dependent on each other?

Dong Joo is a character that doesn’t express his true feelings for Da Ji, saying nasty things to her all the time, but for Changmin, what is your approach towards a girl that you like?

I won’t do it like Dong Joo, who says nasty things and bullies his partner even though he likes her. I won’t fool around, and I won’t try to analyze her thoughts. Rather, I think my approach would be instinctive, and just being myself. From a girl’s point of view, I think I would be easy to get along with. (Laughs)

During filming, it seems that Yunho went to the shooting location in Jeju island to visit you, so please tell us about any episodes during that time. Also, did you get any advice from Yunho, or any feedback with regards to the drama?

I said “Don’t come, don’t come,” but he stubbornly came anyway….  What Yunho had told be before filming was, to do it naturally and not be nervous, and he said a lot of things. As for watching this drama…we didn’t give any actual feedback to each other regarding each of our dramas, but he said “It was interesting, and good.”

So you and Yunho be performing together as actors in the future?

No. (Laughs) I do feel that I want to show everyone “Changmin” as an actor, but when it’s the two of us, we become Tohoshinki, don’t we.. I only just started acting, so I can’t say that I want to see this, but from now on I will work even harder to improve my acting, and show everyone various sides of me.

This was your first challenge in acting, and what is the difference between acting and singing activities? Also, do you see any changes in yourself, or any improvements etc in your activities as a singer?

Putting your feelings into it and expressing yourself is the same. However, in a song, you express one feeling for about 3 to 6 minutes, whereas in acting you have to naturally express all the little changes in emotions that you see in everyday life. It’s different from singing, and it was difficult. After actually trying it out, I think my range of expressions has increased, and this was really useful.

This drama is a love comedy, what kind of genre do you wish to challenge in a drama or movie in the future?

In the future if I have an chance to act, I will definitely give this challenge a try. In terms of genre, I always liked romantic comedies so I wanted to try it, and also a story about youths around my age, with a school as a setting, a school drama is something I would like to try.

Is there a place like “Paradise Ranch” or a time where you can recuperate from your busy everyday life?

After the day is over, I drink beer. This beer is a reward to myself, which says “Ah~ It’s over! I worked really hard today.”

Please leave a message to all your Japanese fans, about watching Paradise Ranch, or about your future plans etc.

Not just the lead actors, but everyone who appeared in the show disregarded their own feelings and worked dutifully. As this is a story that talks about a pure, straight love without limits, please watch it. Also, not only is it funny, the setting is set in the beautiful Jeju Island, and I think its a drama which you can enjoy and relax with. I hope that this winter, this drama will be able to warm your hearts.