A proof shot of Super Junior’s Shindong and TVXQ’s U-Know Yunho in New York has been revealed. 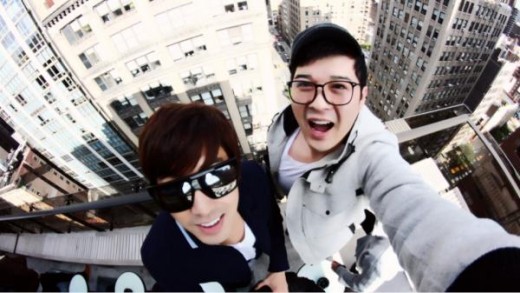 On October 23, Shindong published a photo on his personal twitter together with the following words, “I’m New York! It’s amazing that I’ve come to New York. It’s worthwhile to have taken a 14-hour flight to come here. And one shot with Yunho!”

In the photo which was revealed, Shindong and U-Know Yunho were standing at a height where one would just get dizzy merely by looking down, and took a picture with a bright smile together with New York’s panoramic view. Both of them wore unique sunglasses and spectacles respectively, catching attention for their fashionable appearances which rivals that of New Yorkers.

Netizens who had seen the photos showed off a variety of responses, “They look like they’re really thrilled”, “I’m envious”, “Just by looking at the photo I feel nauseous”, “Yunho’s sunglasses are pretty”, “Just for today, they’re New Yorkers”.

Meanwhile, on October 22, TVXQ has shown off their cool stages at the New Jersey “New York-Korea Festival” to commemorate the 20th anniversary of Korea’s entry into the United Nations.