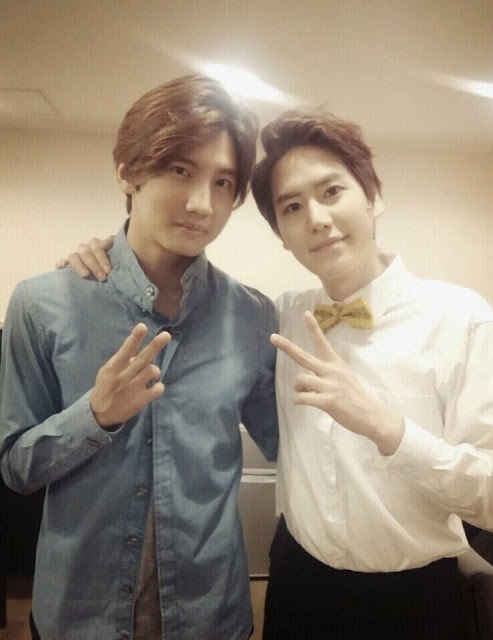 TVXQ’s Changmin showed some love for his buddy, Super Junior’s Kyuhyun, by attending the show of his musical, “Singin’ in The Rain”, on July 6.

Changmin came to see the performance at the Chungmuro Art Hall. During the intermission, he managed to see Kyuhyun’s mother and they comforted each other. He also managed to come to see Kyuhyun at the backstage and snapped a picture with him, as shared by Kyuhyun on his Twitter.

“The one who came back ShimChwang (Changmin) and Singing in the rain^^,” tweeted Kyuhyun along with a picture of the two of them posing with double v-signs to the camera.

The musical “Singin’ in The Rain” is a musical adapted from the 1952 movie of the same name. It tells a romantic story of its casts on their way to stardom. The Korean musical is produced by SM Entertainment’s subsidiary company SM C&C, which has casted a lot of SM artists in its rooster, including EXO’s Baekhyun, Super Junior’s Kyuhyun, TRAX’s Jay and Girls’ Generation’s Sunny.

The musical “Singin’ in The Rain” is currently playing at Chungmuro Art Hall from June 5 to August 8, 2014.