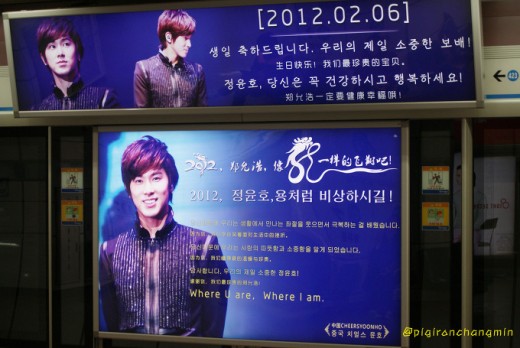 TVXQ U-know Yunho’s popularity in China has also been proven in Korea.

A photo with the title “Chinese Fans’ Birthday Advertisement For Yunho In Myeong-dong” was uploaded onto a particular site.

This was an advertisement placed by a U-know Yunho Chinese fansite in celebration of Yunho’s birthday on 6 Feb, in Myeong-dong subway station, at the platform headed towards Danggogae.

The text on the advertisement reads, “Happy Birthday. Our most precious treasure!” and “Jung Yunho, soar like the dragon”.

Upon seeing this, netizens commented, “Chinese fans are admirable. Their advertisements can be seen even in Korea…”, “Wishing Yunho oppa a Happy Birthday”, among other responses.

On another note, Yunho’s fans donated 140 tonnes of rice to the Community Chest of Korea in Seoul, for his birthday last year.