[News] A Series of Self-Photos and Captions By Yoochun Himself

Park Yoochun hit a home run in his second challenge in acting as well and succeeded in advancing. It is that he is receiving praise in the recently-airing MBC Monday-Tuesday drama Miss Ripley in which he has again taken up the role of the lead, after he finished the initiation ceremony last year through Sungkyunkwan Scandal as a new actor. He has pulled off even the ardent inner-emotive acting which suffers after knowing the falsehoods of the woman he loves, Lee Dahae, and is receiving the evaluation that he has overstepped the limits of an actor whose origins is that of the singer. Park Yoochun who is stimulating the female heart as he plays Song Yoohyun who is the successor to a chaebol group and has innocence and a carefree attractiveness has revealed the set of the drama filming. 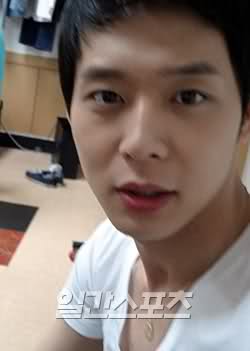 Hello. This is Park Yoochun. As for a while the JYJ World Tour and the filming for Miss Ripley coincided my body was a bit tired also. But as we get such good responses the fatigue just washes away. Even though it is acting that is still lacking you are lenient so I am thankful. In order to portray the sensitivity of Song Yoohyun who is doing his best in order to overcome his wounds, I have for a moment put away “Park Yoochun, the human being” and is only thinking of Miss Ripley as I live. Since I am very immersed in the character it is to the degree that I am worried about the process of coming back to regular life after the drama is over. As the drama is going to its end it is true that I am getting more and more busy. The filming set of our drama Miss Ripley which is run neatly even when everything is flying all over the place—I will show you. 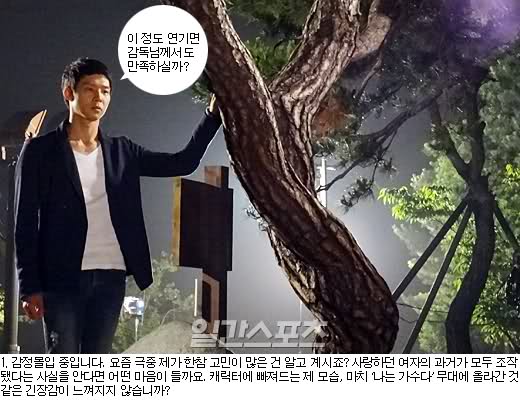 Speech bubble: Will the director-nim also be satisfied with this degree of acting?

1. I am immersing myself in emotions. You know that I am very wrought with worries in the drama nowadays, right? If one were to come to know of the fact that the past of the woman that he loves were all lies, what kind of feelings would he have. This is me getting into the character. Do you not feel the anxiety/tension as if one has stepped onto the stage of “I am a Singer”? 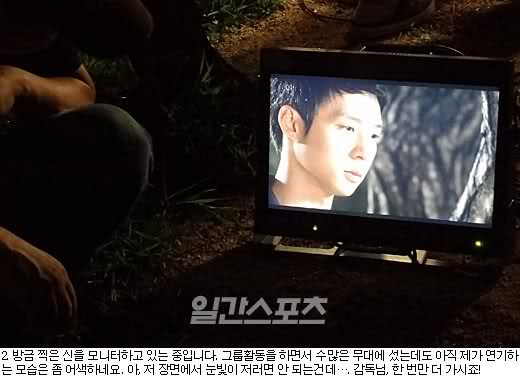 2. I am monitoring the scene just filmed. Even though I have risen on countless stages as I did activities as a group, it is still a bit awkward to see myself acting. Ah, it is not good to have the eyes like that in that scene… Director-nim, let’s have one more take! 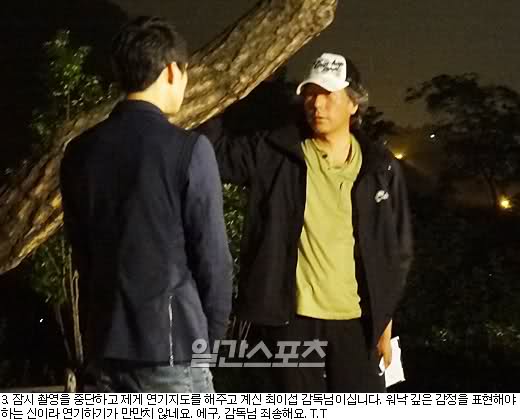 3. This is Choi Isub Director-nim who has momentarily stopped filming to give me acting instructions. Since this is a scene that requires expression of such deep feelings it is not easy for me to act. Oh I am sorry Director-nim T_T. 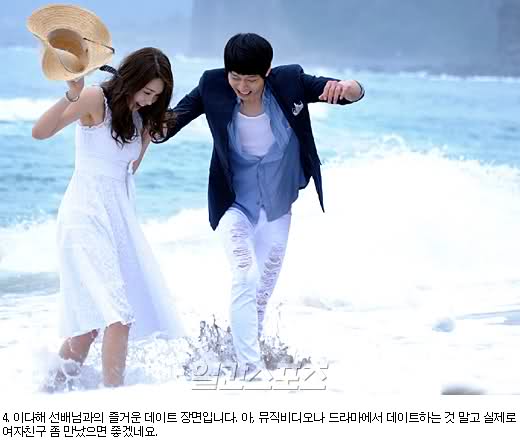 4. This is my having a fun date with Lee Dahae sunbae-nim. Ah, I wish that I could in reality meet with a girlfriend instead of dating in music videos and dramas.

5. This is the script of Miss Ripley. You see the highlighter marks that are meticulously checked right? I am an actor Park Yoochun who looks and looks at the script over and over until it becomes ragged!

6. As I was waiting for my turn in filming in the waiting room I fell into a trance of playing by myself. This is what is called the “lazy man’s push-ups.” This is a method used when the body is tired but you feel that you should work out, sometimes. 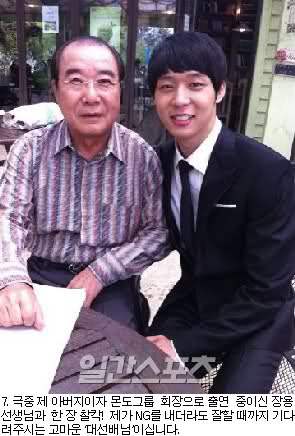 7. A photo with Zhang Yong sunsaeng-nim who is appearing as my father in Ripley and the CEO of Mondo Group! He is a “big” sunbae nim who waits for me to do well even if I make NG’s. 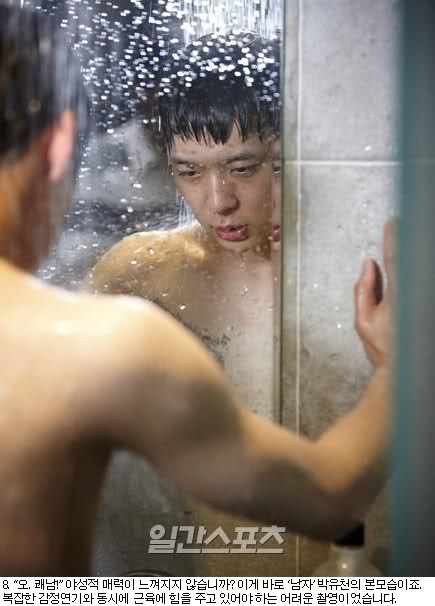 8. “Oh, Awesome Man!” Do you not feel the wild appeal? This is the true nature of the “male” Park Yoochun. This was a difficult scene because a complicated emotion had to be present along with having to keep your muscles firm. 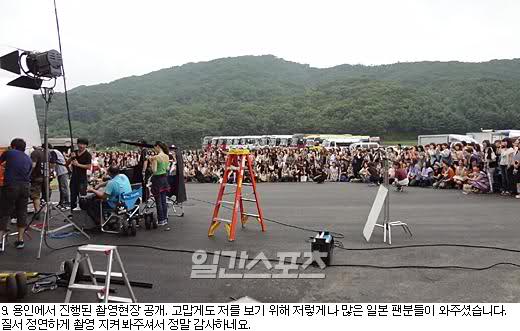 9. This is the open set that was held in Yongin. Thankfully, in order to see me, this many Japanese fans came. I am so thankful because they watched the filming with order. 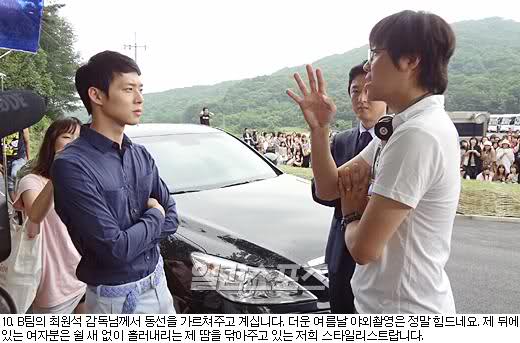 10. Choi Wonsuk Director-nim of Team B is teaching me the line of movement. Outdoors filming on a hot summer day is so difficult. The woman behind me is my stylist, who is wiping off the sweat that pours without cease. 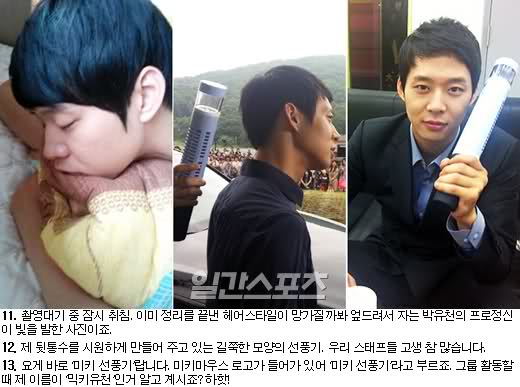 11. Sleeping for a bit while waiting for the filming. This is a photo that makes the professional spirit of Park Yoochun shine, who is sleeping with stomach down lest the hair that is already styled may get mussed.

12. A rod-shaped fan that is making the back of my head cool. The staff is really working hard.

13. This is the “Mickey Fan.” It has a Mickey Mouse logo and so we call it a “Mickey Fan.” You do know that when I am working as a group my name is “Micky Yoochun,” right? Haha!