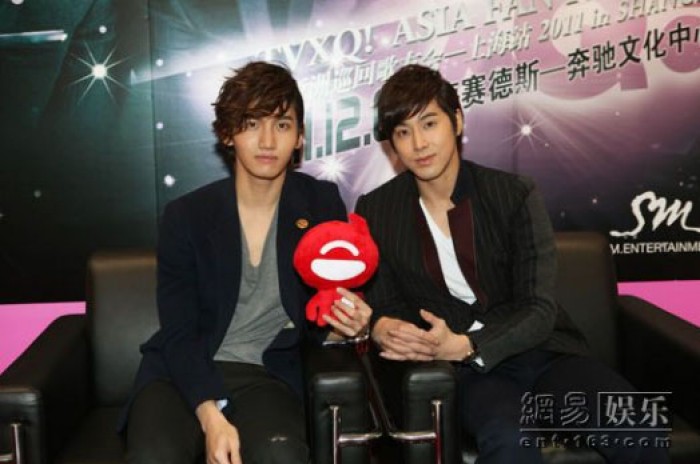 After going through contractual issues and switching from a 5-man group to a 2 man group, the TVXQ appeared in Shanghai for their fan meeting  for the first time with their new grouping. On the afternoon of 9 December, Yunho and Changmin did an interview with ent.163.com. When talking about the recording of their Japanese album, Changmin laughed and said that there was a portion of the recording that required whistling, which he insisted on Yunho doing despite Yunho not being able to do it very well. When talking about their private lives which fans are very concerned about, Yunho and Changmin expressed, “In private, when we don’t have too many activities, we listen to music, watch movies and meet up with friends, very much like a normal person. “

Q: What is the difference between performing in Europe/America and Asia?

TVXQ: It’s the same in both Asia as well as Europe/America, no matter where we are, we can feel the passion and love from the fans, which is surprising to us.

Q: When recording the Japanese album “TONE,” were there any interesting episodes?

TVXQ: In our new album, there is a song called “Easy Mind,” and this song includes a portion where Yunho is whistling. Actually, he isn’t very good at whistling, but we insisted on him doing the whistling. This is one of the more meaningful moments that we remember.

Q: The style of this new album is more mature, and has more variety?

TVXQ: As this is a new album that we released after a long time, so there were many people that were very concerned about the album. We are thankful for everybody’s care and concern, and thank them for their support.

Q: Changmin, will you consider composing songs (T/N : vs writing lyrics) in the future?

TVXQ (Changmin) : So far, I haven’t really thought about writing songs, and maybe I just don’t have the talent for composing, so I feel more inclined towards developing in the area of lyric-writing.

Q: Yunho, do you have plans to compose or write lyrics?

TVXQ (Yunho) : Previously, during TVXQ concerts pr SMTown concerts, I’ve performed songs that I composed and wrote myself, so if there is chance and a good song, I hope that I will be able to include it in an album.

Q: What do the Chinese fans mean to you?

TVXQ: Although there isn’t much of a difference between fans in various countries, but they feel something special towards the Chinese fans, and the Chinese fans are always the first to ask after us whenever something happens, so we hope that in the future, fans can continue to show us their love and support.

TVXQ: When we don’t have much to do, we listen to music, watch movies, and meet up with friends, very much like a normal person.