Just wanted to follow up and clarify some updates of the main lawsuits between Jaejoong/Yuchun/Junsu and SM Entertainment.

*Before you read, the basic information about the current cases will be helpful for you to understand.

There are 2 main lawsuit cases being processed in the court.

(1) The lawsuit to verify ‘invalidity’ of the exclusive contract (= Case No.1)

: This is the one that the three members filed against SM Entertainment in order to terminate the unfair contract and claim for damages.

The members’ lawyers expected that this main case would take a long time, so they filed ‘injunction to terminate the validity of the exclusive contract’ in 2009 in order to ensure the members’ free activities.

– SME filed an objection against this orders, but it was rejected by the court.
– SME also filed another injunction to terminate the exclusive contract between JYJ and C-JeS Entertainment, but it was also rejected by the court as the court acknowledged that JYJ only made a contract to handle management business as an agency and never made ‘exclusive’ contract with C-JeS.
– The court also made ‘indirect order’ that SME cannot interfere JYJ’s activities, and would be pay 20,000,000 KRW as penalty when every time such behaviour is found.
(Well clearly SME does not seem to care this order, but also this is the reason that it never has blood on its direct hands. They do all kinds of dirty things unofficially, through other organisation such as KFPCAI.)

Anyway, the detailed injunctions and other orders were all decided in favour of JYJ and now the main lawsuit (case No. 1) is under process at the Seoul Central District Court as a civil case.

(2) The lawsuit to verify ‘validity’ of the exclusive contract (=Case No. 2)

This is the one that SME filed against the three members as counter-suit in order to claim that its exclusive contract has no problems and the members should pay damages to SME.

As the both cases have almost same documents, witnesses and other details, the court decided to handle the 2 cases at the same time.

As you all know, SME has tried almost every possible thing to postpone the final conclusion of the cases as it is highly expected to lose the cases.

And on May 15th 2012, the case No.2 (SME’s counter-suit)’s hearing finally came to a conclusion and now only Case No. 1 (the one JYJ filed against SME) is remaining in the court.
[Note: The other details are not known because only basic information such as the dates is open public.]

: If the exclusive contract had been ‘valid’ as SM insisted, JYJ’s claim would not have been remained.
Based on the fact that now there are only the three members’ lawsuit and claim for damage against SME, which could not have been remained if the contract had been valid, it seems very likely that the contract would be terminated and now there will be only the arguments between them ‘how much SME would have to pay JYJ as damages’.

Unfortunately Korean law takes Dreiinstanzen system**, it seems also likely that SME would appeal against the final ruling so that it can delay this as long as possible.

Anyway the end of this long-lasting legal process is really coming and some rumors seem to be spread again by some people, so I just wanted to clarify some facts before they go too far.

Next hearing will be in June.

**Dreiinstanzen system: The legal system that people can have a trial 3 times per a case.
(EX: First trial at District court -> Second trail at Appeal court -> Final trial at the Supreme Court)

The following schedules from the website of the supreme court show that the all hearings of the lawsuit were finally concluded, and Seoul Central District Court is going to give its decision on July 19. 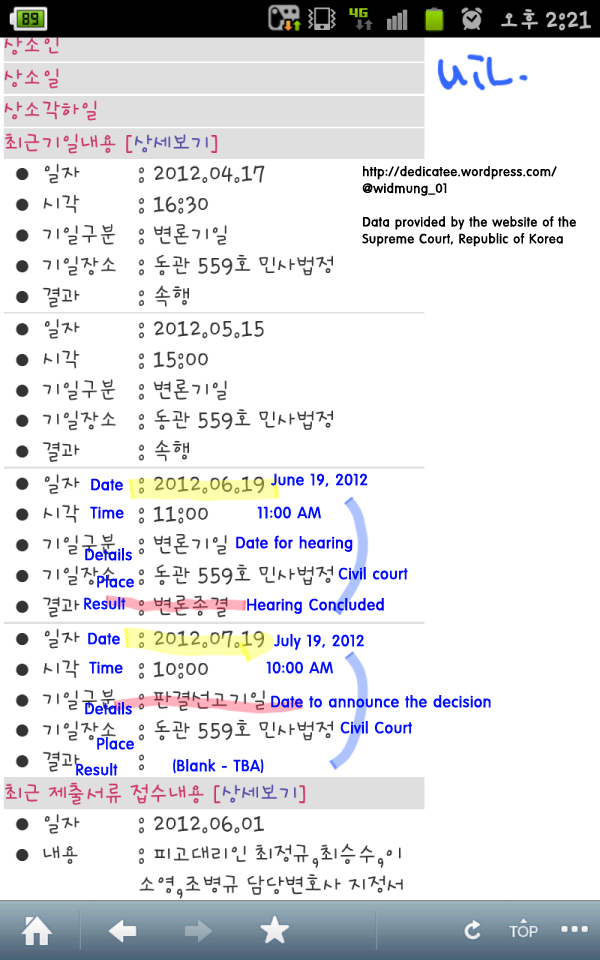 I personally visited the court to see yesterday’s hearing, but it was not open public so could not entre.
(only limited staff and lawyers could attend)
So if you see any stories about the details of the hearing, IT’S A LIE Because no one could entre the court except both parties who directly involved in the case.

Anyway, Finally, At Last, the 3-year lawsuit is really about to be finished.

Have you known that SME is also really famous for losing all of their lawsuits so far in Korea?
Just like other cases and given the circumstances and other decisions by the court so far, it is expected to be another lost case.

But – This is a 1st trail at district court.
Korean law takes Dreiinstanzen system**, it is highly expected that SME would appeal against the final ruling just like they did for the lawsuits with other artists. Don’t forget that they are only interested in ‘how long it can be delayed’, not in the results of the losing game.
Well it is really clear that they’ve forgotten something never changes – Nothing lasts forever.

**Dreiinstanzen system: The legal system that people can have a trial 3 times per a case.
(EX: First trial at District court -> Second trail at Appeal court -> Final trial at the Supreme Court)

**If you want move the post, you must give the credit and use the full contents.
Partial quotes or editing the contents are not allowed. **