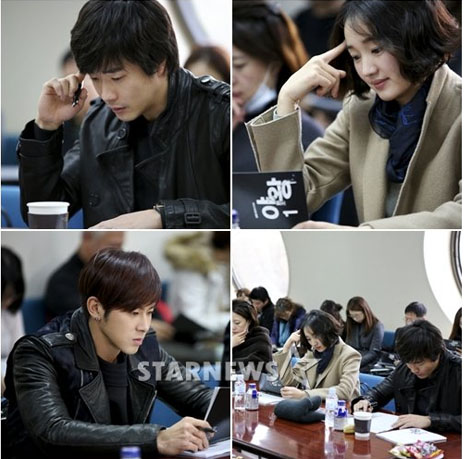 Kwon Sang Woo and Soo Ae displayed their mutual understanding from their first reading for the drama “Queen Of Ambition.”

On 7 December, the staff of the new SBS Monday – Tuesday drama “Queen of Ambition” revealed photos for the location of the first script reading held on 6 December.

After greeting each other, the actors started reading the script as if they were at the actual filming, heating up the atmosphere of the rehearsal hall.

According to the production team, Kwon Sang Woo, who plays the male lead Ha Ryu read the script with a gentle voice which matched his character’s pure image, and occasionally added some comical humor, earning laughter from everyone. Soo Ae, who plays Da Hae read her script in a quiet voice, but changed her tone and volume at the emotional moments, showing the breadth of her experience as a lead actress.

As TVXQ’s Yunho, who plays Baek Do Hyun faced Kim Sung Ryung who plays his sister Baek Do Kyung, they smiled and said their lines, as if it was a real conversation, giving a strong sense of realism.

PD Jo Young Kwang expressed, “I’m really excited about the strong script and good casting,” and “Everyone should think like they are the lead characters, and work together to create a good drama.”