Another DBSK favorite of mine. Memory Lane is a wonderful place to be. Momma Cha

It makes me feel good to know that there are other women like myself who want to nurture our guys.
Momma Cha 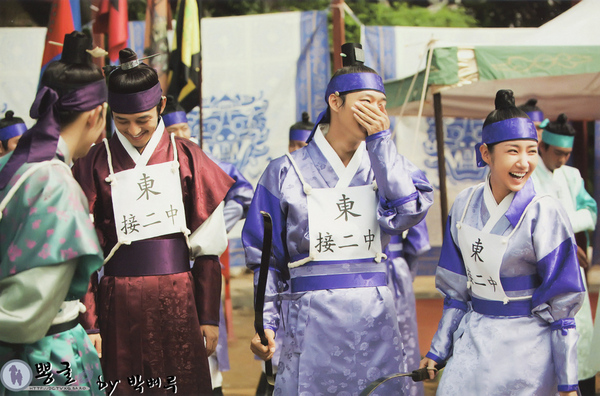 “To have been able to meet you, is already one kind of blessing!”
“As long as you’re there….”
“When a woman reaches 40 years of age, are there still things that will move her heart?”

(Seoul=Yonhap News) If we have to choose an “auntie fanclub” that is currently the most passionate, it has to be the online fanclub “Blessing Yoochun”.

This club, which was formed in order to support Park Yoochun, the lead actor of the drama “SungKyunKwan Scandal”, is where 5000 30-60 year old women who are “doing fanclub activities for the first time in their lives” do the fan activities.

There are more than 100 new threads created in the club daily, with thousands of new replies, and there are small groups who meet up at different locations, deeply into the “Yoochun sickness”.

In the past, these women who used to like Shin Seunghun and Seo Taiji and Kids, they were simply content to buy the music they liked back then.

So what was it that set their hearts aflame?

◇Have you ever had any experience doing fan activities?

▲Yoo Soo Yeon=Participating in fanclub activities; this is a first! During university, I liked Seo Taiji and Kids for a short while. They were the leading cultural icon then.

▲Lee Mi Young=I had that sort of experience in the past. Bae Yong Joon started out in 2001 with Hotelier. I guess Hotelier can be said to be where the auntie fans originated from! Hotelier was Bae Yong Joon’s comeback work after 2 years and at time my impression of him was “Who is he? He’s really smart, not bad.” That’s how I fell in love with Bae Yong Joon. At that time, the Internet was not as developed as it is now and I even got my husband to teach me how to get into MBC’s forum. Then, there were already cafes on Daum (t/n: cafes = fanclubs) and for the first time, auntie fans gathered and Japanese fans also joined, so that’s how it grew.

▲Kwon Dae Hyan=It’s the first time for me. While schooling, I’ve never once liked any actor, singer; I didn’t even have a crush on any male teacher. I’ve only ever loved my husband, but after watching “SungKyunKwan Scandal”, his elegant looks and way of speaking and the way he faces reality, made me fall. Then from “SungKyunKwan Scandal”, I slowly got to know about JYJ, TVXQ. I see the way these children are facing the realities of their situation and a strong sense of justice comes pouring forth from my heart.

▲Na Gyeong Ee=This is the first time I’ve liked an artist so much. During Junior High and High School, I liked Duran Duran. Then, there wasn’t any web culture, so there was no way I could actively seek to collect information. At that time my hobby was to collect foreign magazines and that’s how I spent my youth. However, to let me understand a star through a TV drama and fall so helplessly, this is really a first. At the beginning I couldn’t really accept that I had such a side to me and I needed a little time to get used to this mentality. But by the time I’ve slowly adjusted, my heart is comfortable with it and I spend each day happily.

▲Hon In Ha=It’s also my first time participating in fan activities. I love listening to music and for my generation, that’s when Shin Seung Hun and Kim Gunmo were active, but I only bought their music to support them. Actually, I was really hesitant in the beginning, but as my liking grew bigger, I placed this liking and words of support onto the online forums. Nearing my 40s, for the past 10 years, my life revolved only around my job and my family and I rarely meet my friends. Through Yoochun, I could now express from this previously repressed heart and I even discussed my fan activities with my husband, which helped to dissolve the knots of misunderstanding that had formed between us over the years. It increased my confidence manifold!

▲Kim Eun Hee=It’s my first time too. It was also the first time I entered KBS’ forum, then I got to know about cafes. In the beginning I didn’t join, I just surfed, but in the end, I couldn’t curb my curiosity and joined the fanclub. Even until now, I’ll check it everyday. However, I have children so I can’t spend long periods of time in the club, but I’ll check it at least 2 to 3 times daily!

▲Lee Mi Young=Park Yoochun’s portrayal of the character “Lee Seonjoon” gave me this thought: “How should I pass my youthful days?” The reason why the aunties can fall so deeply for “SungKyunKwan Scandal” is because youth has become a thing of the past, and there are some parts of ourselves that have been forgotten because we have been constantly living out our lives in the role of an auntie, or losing our sense of self as someone’s wife, or regretting the wasted years spent in motherhood. Seeing such a bright youth like Seonjoon, we’ll have regretful thoughts like, “I had times like these too, I used to have dreams too…” This is why we want to protect Yoochun; so that he can fulfill his dreams. Don’t you think it’s a really difficult thing to move the heart of a 40 year old woman? Our passion for marriage life and other activities had already cooled down. But now, this passion has returned to our hearts, so we want to look for things that we can do for him because that makes us feel happy.

▲Yoo Soo Yeon=The people in their 40s (t/n: referring to her generation) have lived their entire lives constantly running forward. My mother always used to tell me “Don’t live a such hard life.” At that time, I didn’t really understand what she meant by that. I accidentally came across the scene where the lead of the drama placed his hands on his chest and felt his heartbeat. That action of his; I unknowingly mimicked him. At that time, I suddenly felt “It’s time to rest a little.” Actually, this thing called life is merely this, yet I made myself so crazily busy. It’s also time that I gave myself time to listen to the sounds of my heart. Because of the drama and its lead, I managed to change myself and I really think I’m fortunate for that!

▲Yoo Soo Yeon=To be honest, there’s really nothing that the aunties of Korea can’t do. For 20 years, the real estate market was immovable and even though the government raised the bar for the entrance test, they ignored it and inflated the private education market. Is there anything the aunties of Korea can’t do if they’re together? It’s just as well, we can use this opportunity to make changes to the cultural market and satisfy your eyes, so that you can constantly see the people you wish to see. Our interest in real estate and higher education has already gone stale, so let the aunties gather to do this. It so happens that the highly educated aunties have nowhere to go so isn’t it a win-win situation if we can help each other out? I keep thinking of these things that will give purpose to life.

▲Na Gyeong Ee=This is the strength that Yoochun gave to us. During this time, it’s not that we didn’t do such things because we didn’t know how to, but it’s because there was nothing that could excite us into doing it.

▲Kwon Dae Hyan=Because we’re all mothers, that’s why we have such a thinking. Now, the dream for majority of our youths is to become superstars. We’re not just doing it for these children (t/n: JYJ), but we’re also building the foundation for “our children” (t/n: of society) who will eventually become artists, so that they can do their activities in the entertainment world under healthy conditions.

◇Are there any interesting episodes?

▲Lee Mi Young=I’m an operator for the fanclub. I once started a thread “Who got tickets to the Drama Awards?” and at that time a lot of people raised their hands. People in their 40s are active in all walks of lives in society, so it’s easier to get tickets. At that time there was a rumour that said that it was especially hard to get entrance tickets to the awards. In the end, 50 seats out of the 300 seats were filled with our members – that’s a big difference!!!

▲Na Gyeong Ee=Even Park Yoochun’s mother only got standing tickets but I heard that someone from Blessing Yoochun had 2 tickets so I gave one to her.

▲Kwon Dae Hyan=The concert date and the season to make kimchi coincided. We went to so much trouble to get the tickets but my relatives and in-laws kept making plans to make kimchi and as wives and daughters, we had to go. We had no choice but to give our tickets to the younger fans. This is why our members all have such troubles. (Every winter in Korea, the people will make kimchi in huge batches, enough for them to eat one whole winter, so it’s a big process.)

▲Yoo Soo Yeon=It was also really difficult for me to get my ticket from someone. The person who gave me my ticket said – The tickets for the Drama Awards were mostly grabbed up by Park Yoochun’s fans. In addition, the fervor of their support was really strong, so it was very surprising. Bae Yong Joon and Lee Byung Hun also have very high popularity in Japan, but to witness such a strong auntie fanclub, this was a first. – When I heard words like this I felt really content.

▲Kim Eun Hee=Every year, during the end of the year, I would never watch the award shows. But I really wanted to see the Drama Awards for myself. So I asked for a favour from someone I know and I called her everyday asking “Did you get a ticket?” I even got a scolding from her husband (laugh). So I said, “I’m doing this for my daughter” but I still got caught in the end. When I got the ticket, unfortunately, my husband caught a cold. I had to run to the supermarket at night to buy pear, ginger and honey and return home to sincerely cook it before serving it to my husband who was sleeping. In my heart I was secretly cursing, “Hurry up and get better!” I was shocked by my own actions (laugh).

▲Na Gyeong Ee=During the period of time when the Yeong Pyeong Island incident took place, I went to watch JYJ’s concert. On the first day, the opening was delayed for an hour, so I just stood there in the cutting cold, waiting. In front of me were two Japanese fans and behind me were two Malaysian fans and the people around me knew some Japanese and English so we spent our time chatting with these international fans. If it were not for JYJ, we would not have had any common topics. We chatted really happily. A few days ago, the Malaysian friend even gave me a long distance call, asking me if I had any latest news. I made an international friend! At the time of the concert, things were a little unstable because of the Yeong Pyeong incident but these foreign friends didn’t mind all that and came to watch the concert; I really admire them.

Do not remove/add on any credits