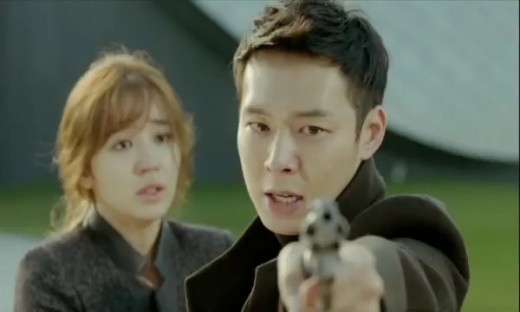 The adult version of the most anticipated drama for the second half of the 2012, MBC’s Wednesday-Thursday ‘Missing You’ trailer with the leads Park Yoochun and Yoon Eun Hye were revealed recently.

On the 31st night, in the trailer of Park Yoochun-Yoon Eun Hye version for drama ‘Missing You’, it was filled with sadness and the grieving looks of teary Park Yoochun attracted attention.

Holding on a touching and fresh first love at 15 years old, behind the looks of Han Jung Woo (Yeo Jin Guk) and Lee Soo Yeon (Kim So Hyun) with solemn family histories. It then led to a uncertain Yoon Eun Hye who kept saying ‘Sorry’ while seems to be on the run from someone, together with Park Yoochun who painfully grieved while holding up a gun and shouting ‘Don’t ever let go of my hand this time’. Their portrayal predicts their tough and difficult love.

When the 1st and 2nd episodes’ trailer of Yeo Jin Guk and Kim So Hyun were revealed, there were reports and heated discussions on various sites and forums. The revelation of the adult version with Park Yoochun and Yoon Eun Hye has also aroused attention and making anticipation for the premiere broadcast in a week’s time.

In the forum of drama ‘Missing You’, there were many who commented, “Am curious on how Park Yoochun and Yoon Eun Hye will take over the love story from Yeo Jin Guk and Kim So Hyun.”, “Han Jung Woo’s tears shocked me!”, “The trailer looks like a movie.”, “Missing You. I wish to watch it as soon as possible.”, “Just by the trailer, it seems to be on the route to a hit drama.” etc.

‘Missing You’ is a hide-and-seek love story about a couple who held on their 15-year-old first love and their development after they grow up. It will premiere on the 7th this month.