TVXQ will be holding a cover dance contest for their fans.

On 9 October, according to management agency SM Entertainment, there will be a cover dance contest to celebrate the release of TVXQ’s new song “Catch Me” on 24th of last month. The choreography of “Catch Me” is a vibrant dance that has also been called the “hulk dance.” This contest will have two categories, for choreography and vocals, and those who wish to participate should do a recording of their own dance and vocal cover of “catch me” in a video and enter this contest via everysing.com.

The results of this contest will be revealed on 7 November, and winners will be invited to the “TVXQ Live World Tour ~ Catch Me”, and could also win special presents such as signed TVXQ albums, handprinting and signed photographs.

Currently, TVXQ is gaining much popularity with their song “Catch Me.” 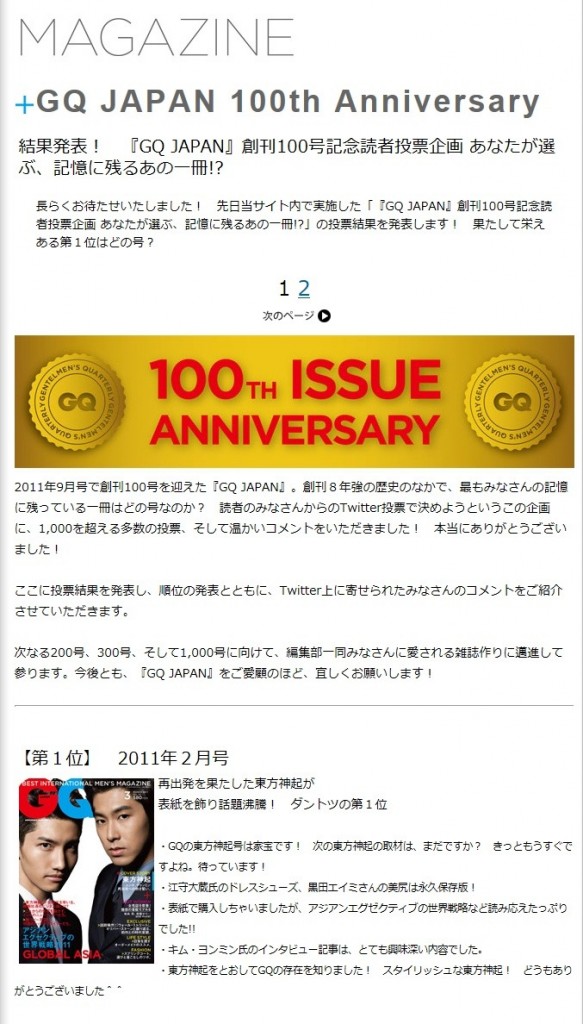 It has been a long wait! Some time ago, we started a ” “GQ Japan” 100th Issue Commemorative Readers’ Vote Project ~ Your Choice as to the Most Memorable Cover”. Here are the results of that vote! Who is in the most prestigious #1 place?

The September issue of GQ Japan coincides with the 100th issue since GQ Japan’s founding. In its 8 years of history, which issue left the readers with the biggest impression? Through this project of Twitter voting, more than 1,000 votes were cast, and we have also received many warm comments! Thank you very much!

We will reveal the results of that voting and the rankings. We will also introduce the opinions of readers which have been conveyed to us through Twitter.

For the next 200th issue, 300th issue and 1000th issue, the editors will strive towards creating a magazine which will receive a lot of love from everybody. Please show lots of attention to “GQ Japan” and take care of us!

Tohoshinki, who has made a comeback

They have adorned our cover and created fervent buzz! Of course they’re #1!

Through GQ, we have found out about the aura of Tohoshinki! Cool Tohoshinki! Thank you very much ^ ^

*Note: only Tohoshinki-related parts have been translated.