I’ve worked in public service positions my entire adult life. Public Service is rewarding in some aspects, but it can carry severe risk. A public servant is subject to whom he/she serves–the people. In the instance of Chris Stevens–the political morass called world politics.

So why do people choose to serve in the public arena? What compels an individual to risk life and limb, or even reputation, in the struggle to help others. I believe that there is a call on a person’s life that they recognize early on, and this call continues to persist until it becomes reality.

Public service encompasses many fields and has many applications. On a local scale it is the teacher, counselor, preacher, policeman, librarian, social worker, editor…I could go on. On the national and international level it is the Newscaster, the Senator, the Representative, the Judge, the President, the King/Queen, the Soldier, the Ambassasor… By the term public, the nature of the work is made known, and the implications of the task are defined. To perform public service work you must engage the public and all that term implies. This is where the rubber meets the road.

Commitment is a strong concept and action, and there are many who cannot commit. This is because committing involves giving over a large part of yourself to someone else’s control. It means serving when your own natural instincts scream “no”. It means making the decision to risk a loss in the effort to lift someone else up. It can span as wide as a neighborhood, a town, a nation, or the world. Over the span of history many public figures have been martyed.

I salute Ambassador Chris Stevens for the ultimate sacrifice he and others like him have made in the cause for peace. May their effort on behalf of the common good last for eternity to inspire others to also toil to serve the struggling masses regardless of differences in ideology or societal norms.

It is through the concerted efforts of many artists, their fans and supporters, and relief agencies supported by everyday people that Japan is continuing to receive help for recovery from the earthquake and tsunami of Aril 2011. It takes years to recover from natural disasters, as is evidenced by New Orleans and surrounding areas, the West Coast of America, and by Haiti and other countries. The list is too long to include every area of concern. Please consider giving to the relief agency of your choice in this continuous fight to promote recovery in many countries.

Warm-hearted JYJ are “model examples to follow”: “Give back as much as they earn”

[Trans] 110426 With Hundreds Of Millions Of Won For Income, Even JYJ’s Donations Are Of A Large Scale 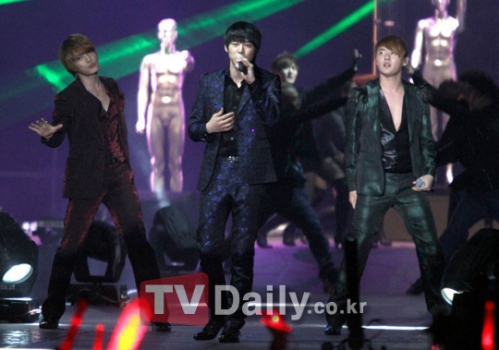 All Photos Credit: As Tagged + TVXQAustralia.org

According to a representative, the members of JYJ have houses over the price of 3 billion Won under their names as well as famous and expensive super cars such as Lamborghinis, Ferraris and Maseratis.

Their income, which totals up to hundreds of millions of Won, comes from the artiste-centered contract they have with their current agency. C-JeS Entertainment, who is currently in charge of JYJ, bases its income division and beliefs on respecting each individual artiste’s interests and talents as well as giving said artistes the agency’s full support in whichever genre they wish to pursue. This specific system was what gave JYJ the opporunity to pursue a variety of interests, which naturally led to high earnings.

JYJ have also become model examples to follow as they give back as much as they earn through their fans’ love. Not only have they donated a portion of their ticket earnings to an international humanitarian organization for every performance, but they have even donated 600 million Won to Japan to aid in the earthquake and tsunami relief.

The group is also famous for the warm-hearted generosity its members give to their staff. According to a representative who took part in the ‘JYJ World Tour Concert in 2011′, “They take care of the staff so well, just as if we were members of their family, that it makes me wonder if other stars act the same way. They buy us meals and drinks while we’re working and even pay for everyone when we go out for dinner as a group.”

They have branched out from their original career as singers and morphed into actors, musical actors and directors. JYJ boast ‘world class’ generosity, heart, earnings and efforts to do their best in whatever they are given. Through a world tour that encompasses Thailand, Taiwan, China, Canada and the US, JYJ plan to solidify their position as Korea’s representative Hallyu artistes.