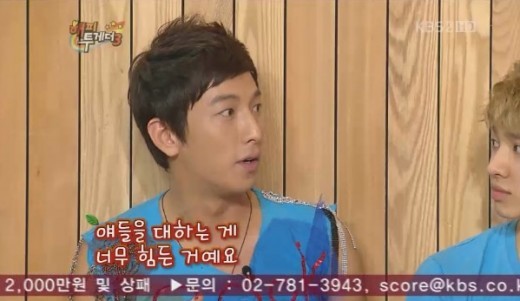 Actor Park Gun Hyung revealed how he ended up joining the celebrity soccer team that Kim Junsu’s introduced him to.

The actor appeared on the episode of KBS 2TV’s ‘Happy Together Season 3′ that aired on the 20th with his fellow team member Lee Gi Kwang.

Lee Gi Kwang stated, “Park Gun Hyung is quite a big guy and really tall, so you’d expect him to be really good at soccer, but he just likes playing for fun,” and Park Gun Hyung added, “JYJ’s Kim Junsu persuaded me to join, but I found out that everyone was an idol singer.”

He continued to add, “Because of the age difference, it’s harder to be around them than it is when I hang out with people older than me.” The other celebrities on the show smiled as they said, “If we were in your position, we couldn’t have done that. You’re amazing,” and “Aren’t the oldest people usually the financiers when people meet up?”