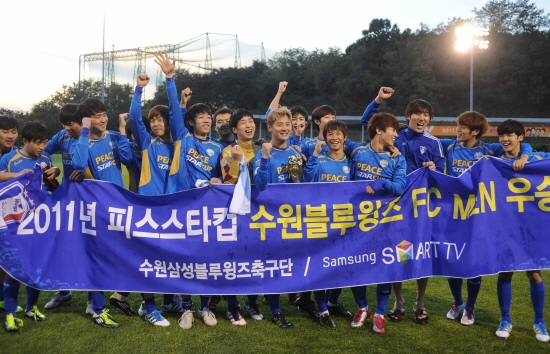 In the finals match between FC MEN and Miracle FC (captained by Kim Yong Man) on the 19th at the Suwon World Cup Stadium, FC MEN turned the tables around in their favor and won the match 4:3.

In the tournament for the first half of the year, FC MEN and FC Libero (captained by Seo Gyeong Seok) were locked in a fierce battle in the finals. In this match, Kim Junsu and Yoon Gyeong Sik were the star players as they scored four goals, clinching the victory for their team. B2ST’s Yoon Du Jun’s performance earned him the ‘Suwon Bluewings FC MEN, Man of the year’ title from his fellow teammates and the Samsung Bluewings team.