Translation 110515 The Reason Why Kim Junsu Got Mad At A Checkpoint Because Of Park Yoochun? 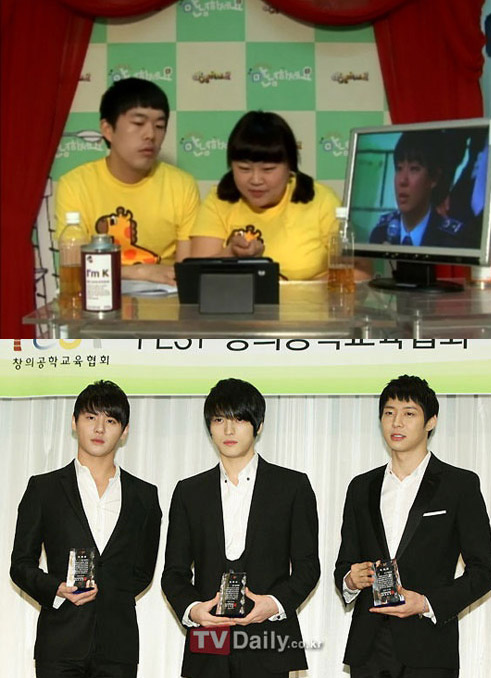 KBS 2TV’s ‘Talk Show of the Public, Hello’, supported by KBS and run by TV Daily, has been garnering attention being aired live through Daum.

In the live airing that the public participated in, Hong Yoon Hwa and Kim Min Gi, the representative couple amongst comedians, listened to the worries of the public and gave solutions to their problems. ‘Hello’ is out to solve the problems of the public through the format of the show.

The most interesting story came from a 29-year-old woman working at the Korea Customs Service. This woman was working at her usual checkpoint when she was surprised by an extremely handsome man approaching it.

The person who was approaching her was none other than JYJ’s YoungWoong Jaejoong. In a daze, she let him pass through and was even more surprised when she saw the next person in line. A man was slowly approaching her station and it was as if light was radiating from his body. She realized she was looking at JYJ’s Micky Yoochun.

In order to look at Mick Yoochun’s face just a little longer, because he was so handsome, the woman kept asking him to do things like spread his arms out while she inspected him. Because she wanted to stay by his side for a long time, she held him there for quite a while.

But she could feel a prickle on the back of her head and when she turned around, she was met with the angry expression of Xiah Junsu, who had grown sulky at having to wait so long for his turn. Feeling bad, the woman let Xiah Junsu pass quickly when it was finally his turn.

Viewers who were watching the show live stated, “Not wanting to send Mick Yoochun away.. I totally get what she was feeling“, “It’s interesting to watch the show like this, I wonder what it will be like to see it on TV” and “It’s more fun because comedians are leading the show.”