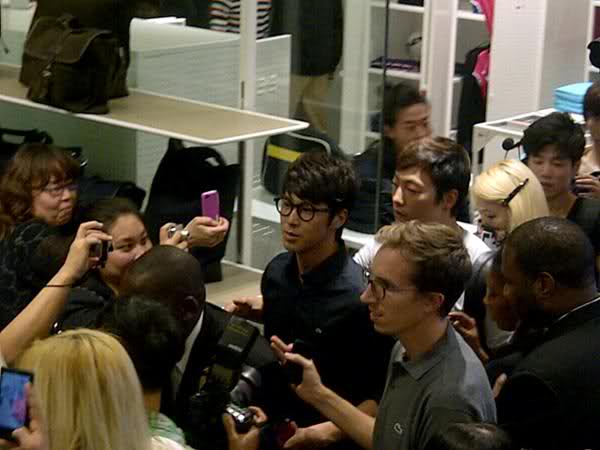 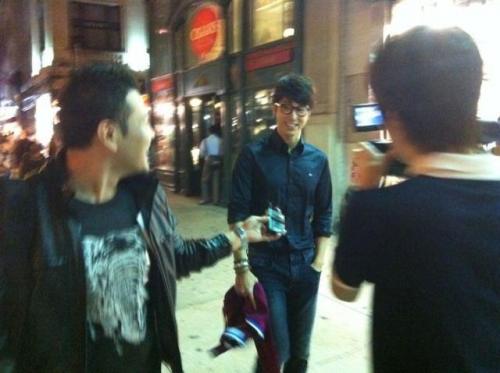 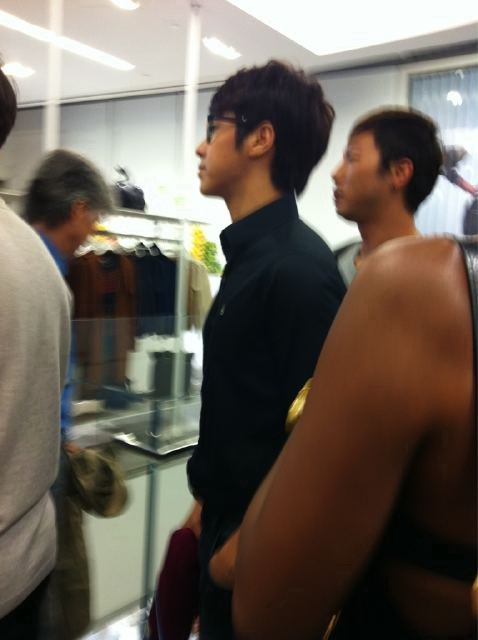 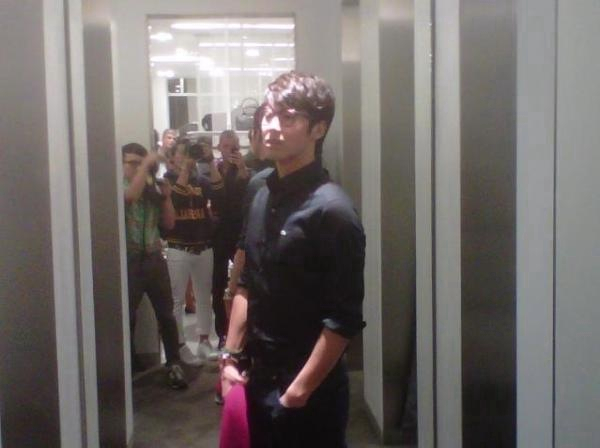 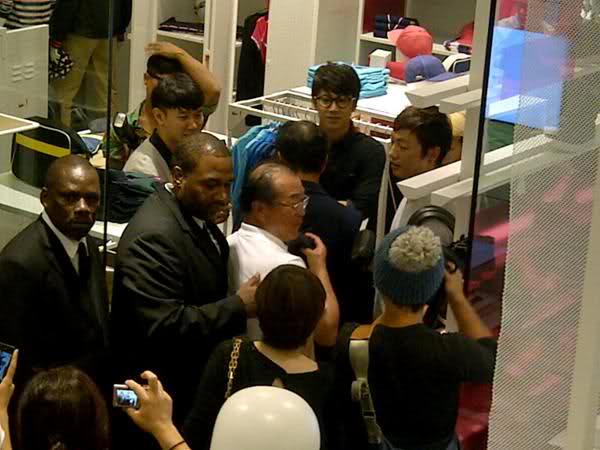 WITH its over-reliance on manufactured teen pop, and a leave-nothing-to-chance managerial style reminiscent of Phil Spector (minus the murder), there are obvious parallels between “K-Pop” and the American music industry of the 1950s and 60s. And perhaps now another box can be checked: the practice of bribing one’s way onto the charts. That’s payola, or 증회 in Korean.

Twenty-nine people, mainly radio and cable-TV staff, have been arrested on suspicion of accepting cash payments in return for airplay or fraudulent chart positions. New artists and their managers, keen to start their careers off with a hit, were the most frequent customers: Incheon Metropolitan Police believe that between April 2009 and May of this year, around a hundred wannabe singers paid a total of 150m won ($143,000) to several producers and the chairman of a cable-TV company. Such sums are dwarfed by the 400m won or so allegedly collected by the operator of a website that compiles a chart based on the number of radio plays each single receives. According to police, the unnamed 60-year-old took the money from singers and pop managers, promising six-month stays in his dubious top ten, for a price of 38m won each.

Others received money for songs that nobody ever heard: six employees of one radio station apparently fiddled with playlists in order to add songs to the charts which had never actually been aired. This pay-to-play(-or-not) scandal is especially unfortunate given the banner year that the Korean entertainment industry has been enjoying. Successful K-Pop concerts as far away as Paris have driven the local press into a frenzy, and prompted ordinary housewives to pour their money into shares of labels like SM Entertainment, the price chart of which now resembles that of an internet stock circa 1999.

Corruption though is the one problem that this country seems unable to stamp out. This year, on top of the usual civil service and chaebol naughtiness, no fewer than 46 players from the Korean football league have been arrested over match-fixing. For its extraordinary economic progress and rapid democratisation, South Korea is a smash hit of a nation—but in terms of Transparency International’s Corruption Perceptions Index, there is a real danger of an imminent drop from the top 40.

Source: The Economist
Shared by: TheJYJFiles 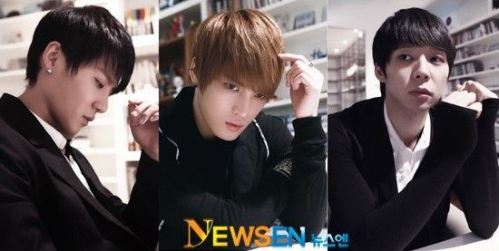 JYJ members revealed their feeling with regards to cancellation of their performance in KBS “Wish for 7 Wonders – KBS Special 5 Live”. Representative company CJeS Entertainment stated that Jeju’s honorary ambassador JYJ was slated to perform 2 songs at the “Wish for 7 Wonders – KBS Special 5 Live” and to go through the ambassador appointment ceremony on the 20th, but they received the broadcast cancellation notice on the 16th.

JYJ Kim Jaejoong tweeted on the 16th with, “If there are going to be obstacles blocking us from promoting our nation’s natural wonder, then this time, I’ll just promote it alone (like this).” He tweeted again on the wee hours of the morning on 18th with, “I don’t believe that the 7 Natural Wonders of the World Declaration Committee chooses beautiful locations in the world as a means of publicity for the profit and losses of a specific nation. Finding beautiful things in the world is a “happiness” that everyone in the world shares. Wouldn’t the purpose of choosing these natural wonders be to preserve them for a long time? But if there are complicated conditions existing beyond this significance, then the simpleness ..of everyone finding happiness will not be a smooth road.” Kim Junsu also expressed on his Twitter, “We cross mountain after mountain.. but ahead looms another one” and “Why are you all sorry.. we’re the ones who should be sorry”
(T/N: all tweet translations are credited to dongbangdata.net)

CJeS Entertainment stated through their homepage that JYJ was supposed to be appointed as ambassadors through the Special broadcast but with Jeju’s local government proceeding with the promotional activities, they (CJeS) officially announced their stance that “In this situation where there are no negotiations with the artistes and performance was one-sidedly canceled just four days before, we will file a complaint to Korea Fair Trade Commission.” CJeS Entertainment has yet to hear any response from Jeju’s local government or KBS Jeju.

On the other hand, KBS had ever stated in their homepage’s message board regarding JYJ’s unability to perform on KBS Music Bank that it is due to the on-going lawsuit between JYJ and ex-company SM Entertainment and yet contracted with current representative company. They also stated, “The continuation of allowing JYJ to perform would cause legal problems and damage the cultural development and order. Until the judgment between JYJ and their company is passed or a mutual agreement is agreed upon, broadcasting activities will be stopped as what was stated before and would be further discussed depending on the judgment.” They further explained that, “The stance before the judgment of invalidity of the contract was a mistake in our management.”
(T/N: This refers to KBS’s change of stance stating that “the previous ‘restriction’ stance was in February.” They later on released another statement that JYJ would be able to appear when they release a new album since JYJ did not released an album since February.)

Sorry. I’m dating myself here, but I can remember my parents speaking of the Spike Jones satires during WWII and listening to the old Victrola copies as a child. Satire has its own role in events. Momma Cha 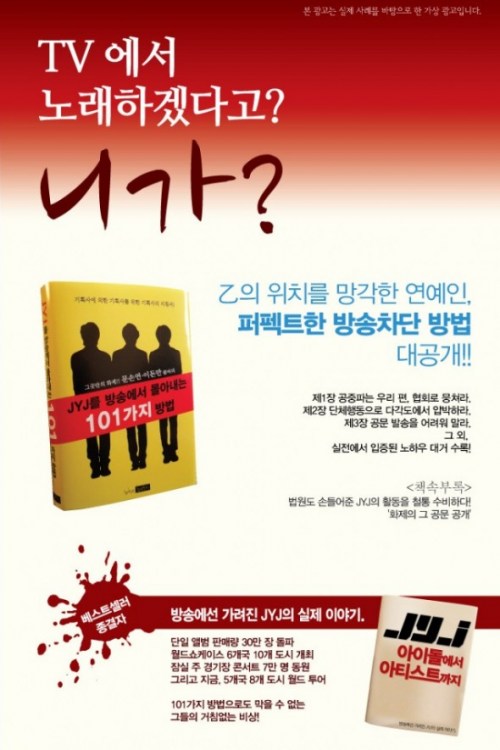 JYJ Fans place a protest AD in the newspaper, satirizing interferences in JYJ’s activities on TV

Fans of JYJ (Jaejoong/Yuchun/Junsu) from TVXQ placed a full-page advertisement in free newspaper [Metro], titled ‘Who wants to sing on TV? You?’. It satirizes the reality that JYJ has been excluded from broadcast media including music/entertainment programs. The publication of the advertisement was mainly led by DNBN(TVXQ’s fan-site) and it is in the form of advertisement for a hypothetical book named ‘101 Ways to Drive JYJ Out of Media’.

Staff from DNBN commented that “JYJ has been excluded from almost every entertainment program on broadcast media. As fans supporting JYJ, we’ll keep informing the public about current unfair situation and calling for remedy.”

JYJ is currently in the dispute with SM Entertainment, former management company, over their exclusive contract. Because of this, they have not been able to appear on TV except on news programs and dramas produced by subcontracting. Broadcasting companies say “We regulate appearances of artists who have controversial issues.”

“We are planning to print more advertisements (more than twice) regarding the protest and criticism for the reality that JYJ is hindered in their free activities. We raised 20,000,000 KRW of funds to do this during two-weeks period in March.” said DNBN.

Text Translated to English: text from the top

For celebrities who have forgotten their position as the inferior
Perfect way to block their media appearance
REVEALED!

Chapter 1 – Public TV networks are on our side, unite under associations.
Chapter 2 – Impose pressure from multiple angles in a collective action
Chapter 3 – Do not be afraid to send out official documents
and many more!
Know-hows proven effective in real-life all included!

JYJ’s new leap forward that can’t be stopped even in 101 ways!

Sorry for the delay. The Flu struck my household on the weekend and we are in recovery. Nuclear family first.
Now, on to what is happening within our beloved extended family. This news concerning the January 18th, 3pm hearing between SM and JYJ. is courtesy of Newsis via Nate; Credit: allkpop.

‘The ongoing lawsuit between the members of JYJ and SM Entertainment has been delayed.

The 47th Seoul Central District Court held the third trial on January 18th at 3 PM, but due to the difference in opinions with both sides being unable to meet a compromise, the court decided for an additional hearing to be held on March 15th at 2 PM with one employee from SM as a witness.

JYJ’s lawyers requested a quick announcement by the justice department by asking, “The promotional period of singers is short, so please give a quick judgment on at least the validity of their exclusive contracts.”

SM Entertainment’s lawyers retorted to JYJ’s lawyers by asking for a judgment to be made including all of the issues that are being disputed.

The justice department responded, “There’s a necessity in further discussing the legal problems before a portion of the announcement is made. There is plenty of time until the next appointed date of March 15th, so we ask for both sides to cooperate and investigate further evidence.” ‘

So, here we have more delay until March 15th, my husband’s birthday. I’ll have to stay very aware that I do not miss this important date while birthday celebrating. I pray that we will all be celebrating an end to this traumatic lawsuit that the verdict will result in benefiting the one’s we love best. JYJCY. I wonder which poor soul has been chosen by SM to bear the burden of being on the stand. Shame on you SM. As if anyone you employ really has a choice as to testifying and to voicing their own opinion. Shame 100 times. In my opinion –there is no credibility when you live in the taskmaster’s house.