Mr. Yuichi Sasahara, the CEO of EMusic, has posted various messages defaming the honor of C-JeS and C-JeS artistes JYJ through mediums such as Twitter. C-JeS took action against Mr. Sasahara and issued a warning through our Japanese lawyer, demanding that he cease all acts of defamation, but he has not done so.

Our agency and legal representatives have come to the conclusion that taking action against and mentioning the false information and rumors spread by this individual will only worsen the situation, so we and the members of JYJ have agreed to not mention Mr. Sasahara on social networking systems (SNS) or give him our attention anymore. We have come to the conclusion that ignoring Mr. Sasahara is the best way to eliminate this issue.

We please ask JYJ’s fans to follow our lead and refrain from mentioning Mr. Sasahara on SNS in order to stop false information and rumors from spreading in the future. 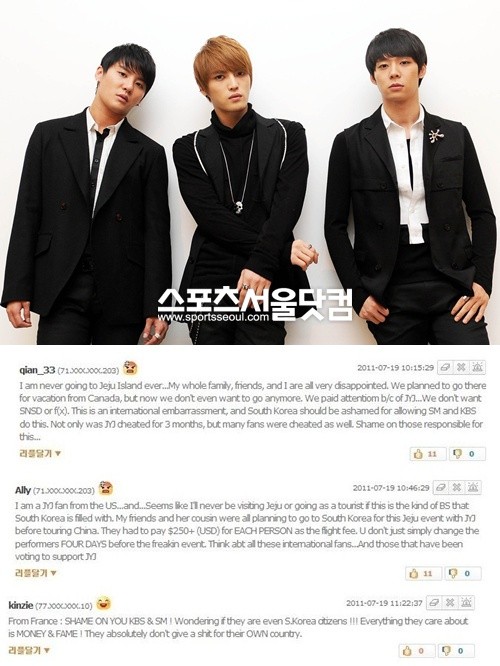 A controversy is expanding at a rapid rate as KBS yet again cancelled JYJ’s upcoming performance. Domestic fans have more to worry about than just that as international fans began criticizing Korea’s image, broadcasting system and Jeju Island.
JYJ’s performance on KBS’ ‘Jeju 7 Natural Wonders of the World Nomination Special Program’ was suddenly cancelled. Not only this, but the controversy deepened when girl groups from SM Entertainment, Kim Jaejoong, Park Yoochun and Kim Junsu’s former agency, replaced JYJ. According to JYJ’s agency, KBS never stated a specific reason as to why JYJ were being pulled out of the performance.KBS, who posted on their viewers’ thread that it would be impossible to allow JYJ to appear on its entertainment programs due to the group’s lawsuit with SM Entertainment in May, has come up to the chopping block once more.
Amidst all of this, posts made by international fans on various domestic portal sites are becoming a hot topic. Most of these fans stated that they began to love Korea because of JYJ and were now thoroughly disappointed by the current situation.
One Egyptian fan stated, “I came to love Korea because of JYJ and I even bought Korean products when I wanted electronic goods,” and “But now I only love JYJ, I don’t love Korea. The fact that JYJ are being treated unfairly because of a greater force is driving me crazy with anger.” A netizen who said she was Australian said, “After I became a fan of JYJ, I began learning lots of things about Korea and I fell for its charm,” and “But because of this event, international fans are worried that there are irrational evils within the Korean entertainment industry and we are enraged. I won’t buy Korean products.”
Fans from other parts of the world criticized the recent event with slightly harsh words as they said, “I was planning on visiting Jeju Island but I will never go anymore” and “How cheap is Korea’s image right now?” Domestic netizens and JYJ fans who saw these reactions are now very worried.
Netizens who read such posts stated, “I’m embarrassed. I don’t particularly like or pay attention to JYJ, but seeing these posts so often makes me feel embarrassed”, “KBS is ruining Korea’s image”, and “Hallyu is a form of cultural diplomacy but who cares if our diplomacy is great when our image is being damaged from the inside?“

Domestic fans are having the same thoughts. One domestic fan expressed her fears as she said, “As international fans began to like Korea because of JYJ, I worry that they will start hating Korea because of this JYJ situation,” and “I find myself unable to say anything to them, except to hope that they don’t start hating everything about Korea.” Another domestic fan exclaimed, “The international fans know everything that is going on domestically. They’ve had to cancel of their flight and hotel reservations that they had made to watch JYJ perform. Not only did KBS miss out on a chance to bring in foreign money, but they’re also a disgrace to Korea.“
Through this situation, not only has KBS damaged its own reputation, but that of Korea as well in the eyes of international fans. Regarding this, KBS stated, “It is our right to choose who performs,” and “We are planning on releasing our official statement once the concert ends on the 20th.”

[TRANS] 110716 A Sudden Cancellation Of JYJ’s Performance Has Fans Fired Up, Leading To A KBS Boycott
Posted on July 20, 2011
by melodiamuse 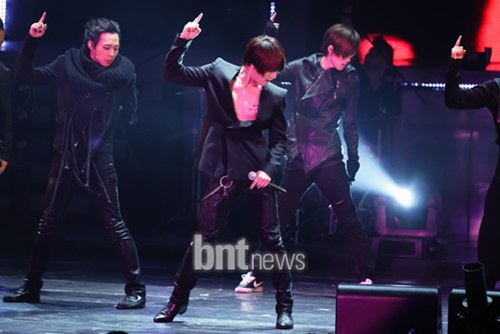 JYJ’s fans have been expressing their rage over the cancellation of JYJ’s upcoming broadcasted performance.

On July 16th, JYJ’s agency C-JeS Entertainment uploaded an official notice on their homepage that read, “JYJ were scheduled to appear in a TV special on the 20th as honorary ambassadors of Jeju’s 7 Wonders nomination, but received a notice today, stating that their appearance has been cancelled.”

They continued to say, “We have currently asked the organizer for the specific reason as to why JYJ’s appearance has been suddenly cancelled,” and “We will post another notice as soon as possible once we have confirmed the details behind the situation.”

JYJ were chosen as the honorary ambassadors for Jeju’s nomination as one of the 7 Natural Wonders of the World and have been garnering great attention as they were expected to drastically increase the number of votes that Jeju receives in the poll by the Swiss foundation ‘New 7 Wonders’.

Netizens who heard the news left comments that demanded an answer from KBS that read, “JYJ are superstars who can move thousands of fans all over the world with one or two songs. Because of KBS’ thoughtless decision to notify JYJ of the cancellation mere days before the event, we demand that they tell us what division of their broadcasting company will compensate the losses in time and money that fans face as they either cancel plane tickets, resulting in a need to pay cancellation charges, or as they are already in Jeju“, and “JYJ are Korean singers. So what is the reason that they cannot appear on Korean channels? They are more talented than most groups and are the honorary ambassadors of Jeju. If KBS can’t give a proper reason as to why JYJ’s performance has been cancelled, then they must allow them to perform.“

Other netizens stated, “Wasn’t the point of getting Jeju chosen as one of the 7 Natural Wonders of the World to let the world know of Korea’s top-quality natural wonders, encouraging growth in the tourism industry in the process? What will they do now about the disappointment they have given to JYJ’s international fans?” and “Many of my JYJ fan friends who are international fans are showing their anger at Korea’s unbelievable system. They have already bought plane tickets and made reservations in hotels to see JYJ perform. What will you do now? Korea and Jeju Island’s image is only getting worse in the eyes of foreigners.”