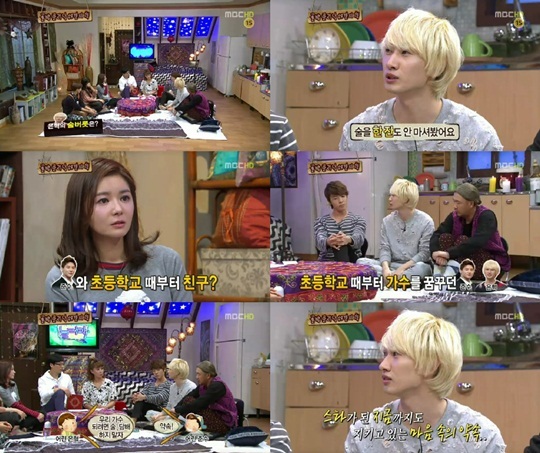 A fact about Super Junior Eunhyuk and JYJ Junsu’s friendship since primary school has been revealed.

On the special episode of the MBC variety programme “Come to Play” that aired on 31 October, Eunhyuk began his talk by stating “I don’t drink even a glass of alcohol.”

On that day, in reply to Yoo Jaesuk’s questions of “What is Eunhyuk’s capacity for alcohol? What are your drinking habits?”, Eunhyuk replied that he doesn’t even “drink a single glass of alcohol”. He also continued to say that he has been “friends with Kim Junsu since primary school” and their “dream of being singers was formed together since childhood”.

At that time, both of them made a promise. He explained his reasons for not drinking or smoking and said he was keeping the promise they willingly made then when they said “Let’s never drink or smoke.” Even though both of them are stars now, they are still keeping that promise that they made.

A little hilarity never hurt anyone. It’s so funny to see how Hyukie makes up to Teukie. After all, he has to work with him. That was a cool kick Eunhyuk. Minho, you didn’t do so badly either. 🙂

True friendship is expressed to all the world and can not be easily parted. This makes me smile. I’m so glad that June and Hyukie are in touch. 🙂 🙂 Momma Cha 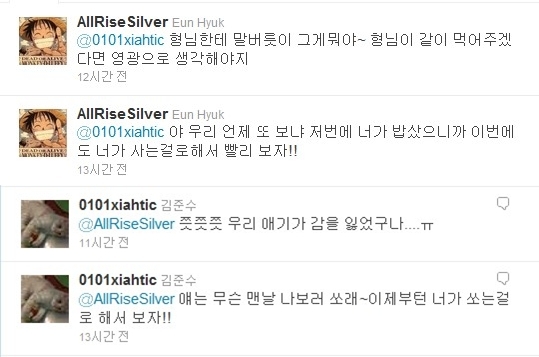 On June 19, Eunhyuk sent a message to Junsu on twitter saying, “Ya, when can we meet again? The last time we ate you treated, then this time you can treat again. Let’s quickly meet up!” In response, Junsu replied, “Kid, why do you make me treat every time we meet~ from now on you should start treating.”

Later, Eunhyuk sent another message, “How can you speak like that to Hyungnim (me)~ you should think that going out to eat with hyungnim is an honor.” To which Junsu said, “Tsk tsk tsk, our child has lost his senses.. T T”

Ever since elementary school until their debut, their close friendship in the entertainment circle is widely known. Through their recent meetings and conversations on Twitter, netizens have expressed, “Finally some news on those two meeting up, ” “So they still keep in contact ah,” “It feels so warm, ” “They really are good friends,” etc.

In addition, the cancellation of JYJ’s appearance on KBS Jeju Island “The Seven Wonders” special episode has ensued JYJ’s side to turn to the law process, while Super Junior’s comeback date has been confirmed with Eunhyuk’s concept photo released earlier today.