It is getting more and prevalent to see fraud of this type appearing not only in the headlines but also in our personal lives. There are some who view society as a means of obtaining a living at the expense of others. Sadly, this may happen again, but I am grateful that this was caught before more damage was done and I am sure that JYJ and C-Jes are thinking the same. 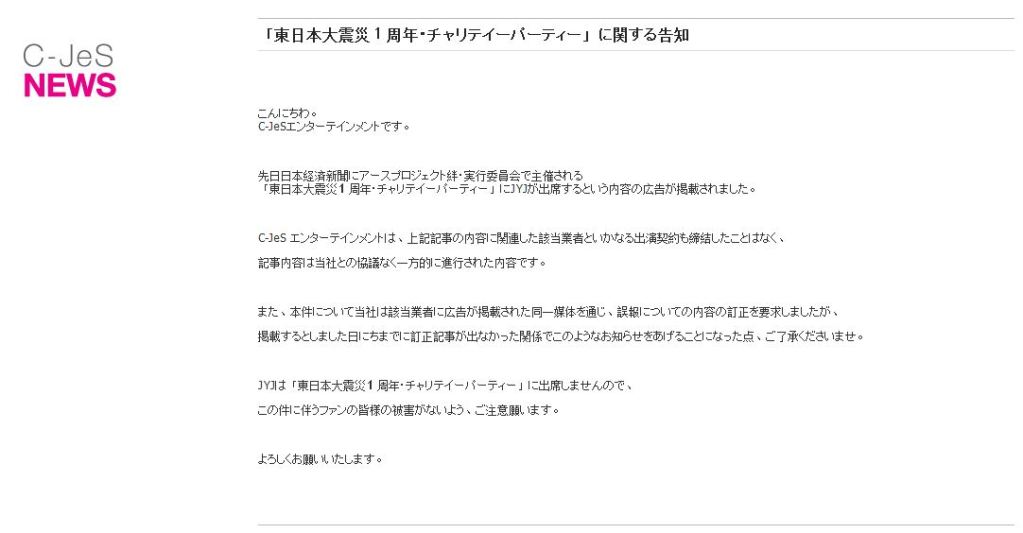 An advertisement was recently published in the Nikkei newspaper stating that JYJ would be attending the “Tohoku Earthquake 1st Year Anniversary Charity Party” organised by the “Earth Project Kizuna Committee”.

C-JeS Entertainment has no agreement nor ties with organisers of the above-mentioned events, and the contents reported were carried out unilaterally from (the organiser’s) side.

Also, in relation to this incident, we have requested, through the media that published the advertisement, for the agency involved (Earth Project Kizuna Committee) to make corrections to the content of the advertisement. However, a correction report has not be published from the day the advertisement was published till now, hence our notice on this matter. We seek your understanding on this issue.

JYJ will not be attending the “Tohoku Earthquake 1st Year Anniversary Charity Party”.

Please take careful note, so that no harm is done to any of the fans involved.

(T/N: Before you freak out, please understand that this is most likely a case of fraud, which means that JYJ’s name was just abused in this situation) 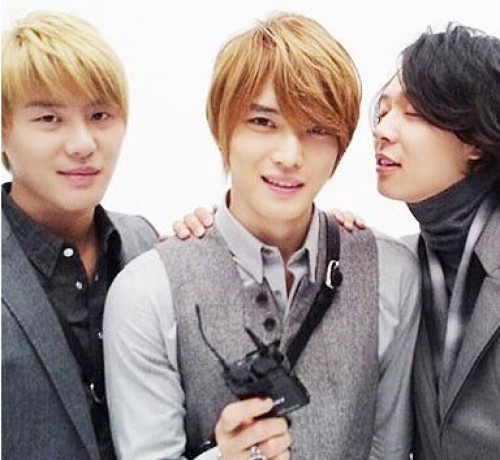 In relation to the “Tohoku Earthquake 1st Year Anniversary Charity Party” which advertised in the Nikkei newspapers that “Popular Korean group JYJ will be appearing,” JYJ’s management company C-JeS Entertainment announced on 4 January that “JYJ will not be appearing at this event.”

JYJ consists of 3 of the 5 members in the popular Korean group Tohoshinki. Kim Jaejoong, Park Yoochun and Kim Junsu left the group in 2009, and (JYJ) has been popular not only in Japan and Korea but in other countries as well.

The event organizers “Earth Project Kizuna Committee” advertised on the evening edition of the Nikkei newspaper on 22 December 2011 that “A Tohoku Earthquake 1st Year Anniversary Charity Party will be held on 21 March, and JYJ will be performing.”

However, with the sudden revelation that JYJ, who were the key point of the party, were not appearing, fans have been crying out that, “This is a fraud” and “This is unforgivable” non-stop.

In this newspaper ad,

1) It was stated that this event was “Produced by : Tokyo International Music Secretariat Office” – A organization that doesn’t exist.
2) The event venue was stated as “A hotel within Tokyo” with the name not clearly specified.
3) The contact email address (“Nifty”) was a personal address

and other “suspicious” details were included, and when the advertisement was first placed, many fans had voiced their suspicions.

Furthermore, the organizer “Earth Project Kizuna Committee’s” homepage (http://earthconcert-kizuna.com) has been locked down since the end of last year, and the contact number suspended, a situation where no one can be found.

It is unclear whether this event was meant to be a fraud right from the beginning, or if this “Earth Project Kizuna Committee” and JYJ’s management agency had prior discussions.

However, if customers who have already paid the money were to report this case to the police, it cannot be denied that criminal charges will possibly be pressed, and the confusion that surrounds this party continues.

O.K. Here goes. While reading the information from the posting entitled 110315 Investor in JYJ Concert Sues Rights-Holders for Fraud….. with the subsequent understanding that there are supposedly investors out there who put out bukku bucks to get a return on artist’s performances–this question came to mind.
If there are individuals (and perhaps corporations?) out there investing millions of dollars into production companies for the use of promotion, expenses, etc; then why did SM have such a burden that they had to assign so much cost to be covered by their individual artists and groups? Where there is smoke there is fire.
So, if I am to understand this correctly–they are sueing C-JeS, and co. even though C-JeS says that the concert rights were transferred to Warner Korea who transferred them to KimXX? It sounds like selling bad loans. This opens up a whole new school of thought on coverage of concert expenses, profit vs non-profit concerts, and who gets caught holding the ball. Also, do any of those investment profits ever in any way benefit the artist themselves? Good Question. Hey, Folks. Give me some feedback here. And if you choose to copy it, please give me credit for the original. Momma Cha

[News] 110315 Investor in JYJ Concert Sues Rights-Holders for Fraud immediately after the hearing was over, articles like the below were plastered all over the Korean web: 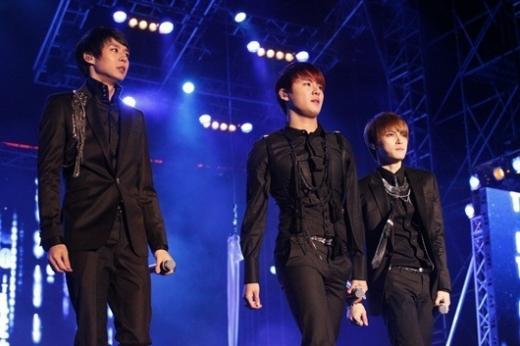 Park revealed in his complaint that “The Defendants conspired to deceive me and defrauded me of my wealth and so I sue.”

According to Park, the Concert Rights to the “JYJ Show-case Tour 2010″ of last year was transferred from C-JeS to Warner Music Korea. After that, it was transferred multiple times and (in the end) reached Kim XX.

Park said that “(he) was interested in the concert industry and from the introduction of a friend first met Kim XX. Kim said upon our meeting that he has the Concert Rights and that if [Park] invested, [Park] could make a very large profit, and recommended enthusiastically that [Park] invests.”

According to Park, he followed Kim’s advice and started to deposit money from October 7th of last year, and drafted an official contract on October 14th. The 5 locations of the concerts were Hong Kong and the USA’s Seattle, New York, San Francisco, and LA. The invested funds were to be used entirely for the concerts, and the budget for the cost of the concerts were to be notified (to Park) in advance. At this, Park invested 1,244,850,000 KRW (approximately $1,244,850).

Park said that “(he) requested proof of the details of the use of funds around October 20th of ast year. But Kim kept pushing it back with excuses of being busy.”
Park also argued that “contrary to what Kim said about his company’s state, Kim’s company had a lot of debt. It’s also been confirmed that he had intention to use the profits from the concerts to repay his debt.”

Park said: “Kim used a company that was already a dissolved company for tax purposes to contract, and he also concealed the fact that he has a debt load of billions KRW when we entered into the contract. Even the profits from the concert of 350,000,000 KRW(approximately 350,000 USD) were collected by the creditors and [Park] suffered harm doubly and triply.”

Park explained the reason for his suit in his complaint: “JYJ held a for-profit concert in Hong Kong on October 24th of last year. But the concerts in the 4 locations in the US, due to the fault of the C-Jes, were non-profit, not for-profit. The defendants did not provide a clear explanation [to Park] even though the schedules and the locations of the concerts were changed. Also no one informed [Park] of the above with official documents. [Park] did not recover one cent from the investment.”

Kim XX, according to Park, told Park that the concert rights were a good investment and that Park should invest in them.

Park alleges that Kim defrauded him.

Please notice that C-JeS and Warner Korea are not involved in any way in this. By the time that Kim met Park, the concert rights did not even belong to C-JeS or Warner Korea. It belonged to Kim. This was a deal that was strictly between Park and Kim. It is unfortunate that Park decided to drag C-JeS and Warner Korea into this by naming the companies as co-defendant and extremely convenient for SM that the stories are being circulated moments after the JYJ-SM hearing is concluded.

The details from today’s hearing will follow shortly. According to accounts, it was quite disastrous for SM and the worst of the hearings (for SM) so far.