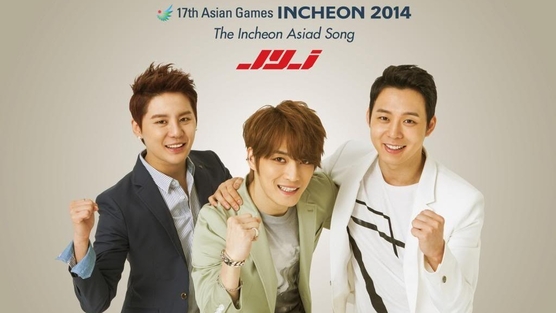 The Asian Games is the most prestigious games organized by the Olympic Council of Asia, bringing together over 10,000 athletes, team officials, and technical delegates from 45 nations every four years. The 2014 Asian Games will be held in the city of Incheon, South Korea this coming September. To promote the games across Asia, the IAGOC appointed Korean superstars JYJ as honorary ambassadors to the 2014 Incheon Asian Games last February 20, 2013. In the words of the IAGOC, “we appointed JYJ as the honorary ambassador, whose popularity is well recognized all around the Asia, to encourage the rest of the Asia to know more about the 2014 Incheon Asian Games.” Fulfilling their roles for one and a half years, JYJ performed extensive promotional activities for the Incheon Asian Games, such as travelling to Guangzhou, China and Hanoi, Vietnam to put on promotional showcases. They even sang the Games’ official theme song “ONLY ONE”, being the face of the Games on promotional advertisements throughout Asia. They have likewise filmed multiple televised commercials to better promote the upcoming Games.

On July 1, 2014, however, JYJ was neither invited nor informed of the press conference that the IAGOC held, and were unilaterally dropped from the opening and closing ceremonies’ list of performers through press releases, despite several attempts by JYJ’s management C-JeS Entertainment to clarify the matter with the Committee as the Service Contract specifically included performance by JYJ on the opening and closing ceremonies. Quite surprisingly, this incident came about after it was recently announced that SM Entertainment, JYJ’s previous management company, was named a sponsor for the Incheon 2014 Asian Paralympic Games. A boyband from SM Entertainment, who had no previous connection to the Incheon Asian Games and not once promoted it will instead be performing a pop-song of their own at the opening and closing ceremonies and also appeared at the press conference in lieu of JYJ. On the other hand, JYJ, the Games’ honorary ambassadors, are barred from performing the official theme song of the Incheon Asian Games, ‘Only One’, which they sang and promoted specifically for the Incheon Asian Games.

On top of this, the IAGOC has been selling opening ceremony tickets since December, 2013 at the sky-high price of 1 Million Korean Won, or approximately $900 USD, using JYJ’s name and saying that JYJ will perform during the opening ceremony. Since JYJ are the official ambassadors, it is reasonable for anyone buying tickets to opening ceremony to expect that they would be performing. As JYJ are limited in their promotional activities due to an invisible hand blocking them, fans of JYJ still bought these tickets and booked international flights to Incheon, hoping to catch a glimpse of JYJ on a fair stage. This now has become impossible as the IAGOC’s anomalous acts in the form of a shameless and fraudulent bait-and-switch scheme. For more than a year, the Committee has made over four billion Asians believe that JYJ is the face of the 2014 Incheon Asian Games through their advertisements and roadshows which JYJ participated in. Yet, they did not bother to mention the name JYJ at the press conference and have dropped JYJ from the list of performers during the ceremonies. Instead, another boyband suddenly appeared at the press conference and in the advertisements instead of JYJ. As of the writing of this petition letter, the official tour agency of the IAGOC which is responsible for selling tour packages to foreigners, is still selling opening ceremony tickets and tour packages using JYJ’s name and thereby continuing to knowingly mislead fans and the public.

The actions of the IAGOC have drawn worldwide criticism from spectators to journalists, tarnishing the reputation of the Asian Games and bringing concern regarding whether or not the IAGOC is capable of holding a fair competition for athletes who have trained all their lives for this one stage. If a mere corporate donation caused the IAGOC to drop their honorary ambassadors in such a disgraceful and public manner, we, the spectators and consumers of the Incheon Asian Games, cannot trust them to conduct fair play for athletes during the Games.

We join JYJ’s management in its plea to IAGOC to keep the promise with their Honorary Ambassadors JYJ. We also believe that the 2014 Incheon Asian Games Committee as well as the Olympic Council of Asia are organized to fulfill the public interest, which is based upon loyalty and trust.

We call upon the Olympic Council of Asia to perform an open investigation into the IAGOC’s actions to ensure an untainted Asian Games and bring justice and fair play to performers and athletes consistent with the spirit of the Games themselves.

JYJ3′s Note:  A Formal petition letter along with the signatures gathered will be sent to the Olympic Council of Asia and the IAGOC.
We would like to thanks to the authors and to the fans & non-fans for participate on this Petition.
Let’s do this for Jaejoong, Yuchun and Junsu and please always remind that together we are stronger.

– SM and the KFPCAI have received a rectification order, the efforts of fans in the past three years has been tremendous
– 80,000 people participate in petitions during 3 weeks of 2011. Total participants in the movement is 180,000 people 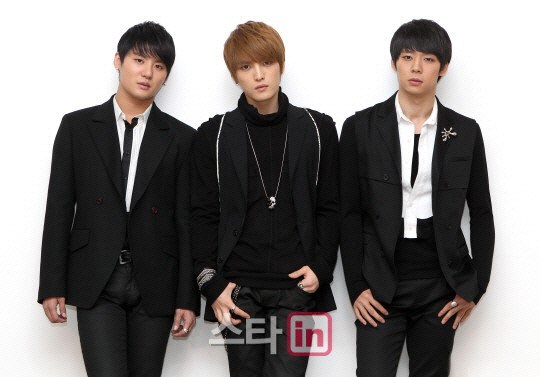 The fans move, and the fans succeed.

The Fair Trade Commission (hereafter known as the FTC) has sided with JYJ’s Kim Junsu, Kim Jaejoong and Park Yoochun, aided by a whopping 180,000 signatures from JYJ’s fans. On the 24th, the FTC prohibited SM Entertainment (hereafter known as SM) and the Korean Federation of Pop Culture and Arts Industries (KFPCAI) from interfering with JYJ’s activities. In their announcement, the FTC stated, “We received many petitions from fanclubs, asking us to allow JYJ to appear on broadcasted programs.” It was found that these ‘petitions from fanclubs’ were the work of both domestic and overseas fans. Some people on Twitter wrote, “The petitions mentioned by the FTC are those that were signed by 180,000 international fans. We were told by the judge that our petitions had been accepted.”

In an interview with edaily StarIN, Lawyer Lim Sang Hyuk, who was in charge of legal advice for JYJ, stated, “The latest decision by the FTC was a result of the fans’ efforts, rather than the work of C-JeS Entertainment or our legal team.” Lawyer Lim stated that the fans were the ones to collect and submit the petitions, as well as file the initial report, and today’s verdict was a result of the FTC investigating exactly what the fans had reported.

JYJ’s fans submitted their petitions to the Seoul District Courts and the Fair Trade Commission on the 28th of February, 2011. One fan who was studying in law school in the US at the time headed the petitions, which were translated into ten languages including French, Portuguese, Turkish and Spanish. Starting on the 2nd of February, the petitions collected a total of 86,418 signatures from 118 countries in a mere three weeks. The petition was submitted to the FTC as a report that required a legal solution. More petitions were added later to bring the number up to 180,000 participants.

The results led to the FTC announcing on the 22nd, “JYJ released their first album in October of 2010 and tried to resume their activities as singers, but SM and the KFPCAI interfered with their activities in the entertainment industry by releasing an official notice that asked those in the industry to refrain from inviting or allowing JYJ to appear on televised programs.” C-JeS Entertainment expressed their welcome for the verdict as they stated, “We believe that the FTC’s recent order to rectify such actions will shed light on the tyranny of super powers in the industry who go against the innovative economy policies of the current government.”

Regarding this, SM stated, “It is unfortunate that such a verdict was made, although there was no evidence to prove that such interference had taken place,” and, “SM is currently reviewing the option of pursuing legal action against this latest decision.”

Kim Junsu, Kim Jaejoong and Park Yoochun, who are former members of TVXQ, brought up the issues surrounding their exclusive contract with SM in June, 2009 and entered a legal dispute with the entertainment agency. Both sides were then locked in a legal battle regarding the validity of their exclusive contract, which finally came to an end on the 28th of November, 2012 through a settlement.

As you may have heard, there has been movement in the lawsuit between JYJ and SME. Both sides came to an agreement, with JYJ agreeing to not pursue the compensation they were due, in order to move on, and start fresh. They have sacrificed a lot in the last 3+ years, and it speaks to their character that they were willing to give up so much. We all hope SME holds to their agreement and no longer interferes with JYJ’s activities. We shall wait and see. Our goals and aims of ending the restriction on JYJ and promoting JYJ in various media markets still stands. We will update everyone in the coming days, with the various projects we currently have planned. We say a big thank you to all the JYJ fans, who have stood by them, and to all those who have joined us in this endeavor of ours.

This petition is to let CGV know that you are against their unilateral decision to cancel The Day‘s screenings just days before the premiere and that you seek a better explanation for their action instead of the flimsy excuse that they provided. You are also declaring your stance against the “bullying” that has become endemic in the entertainment industry.

Step 1: Register for a Daum account by visiting http://www.daum.net/ 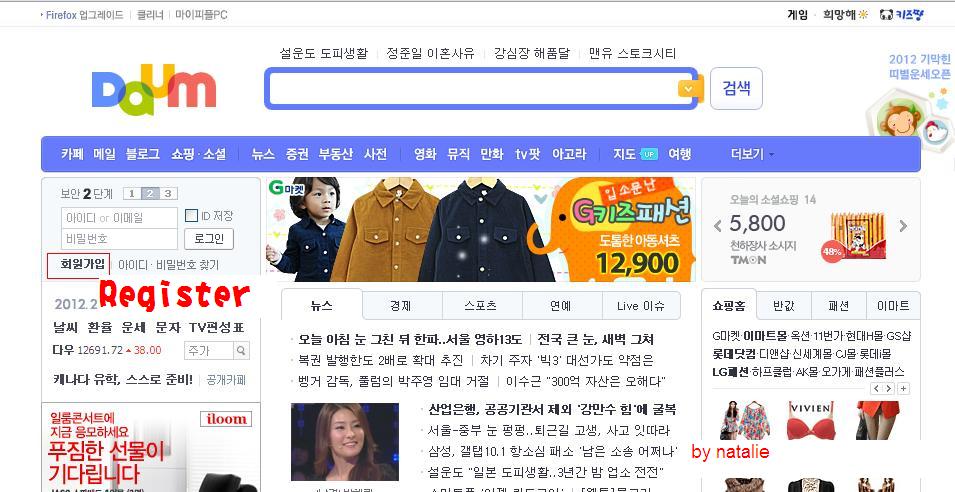 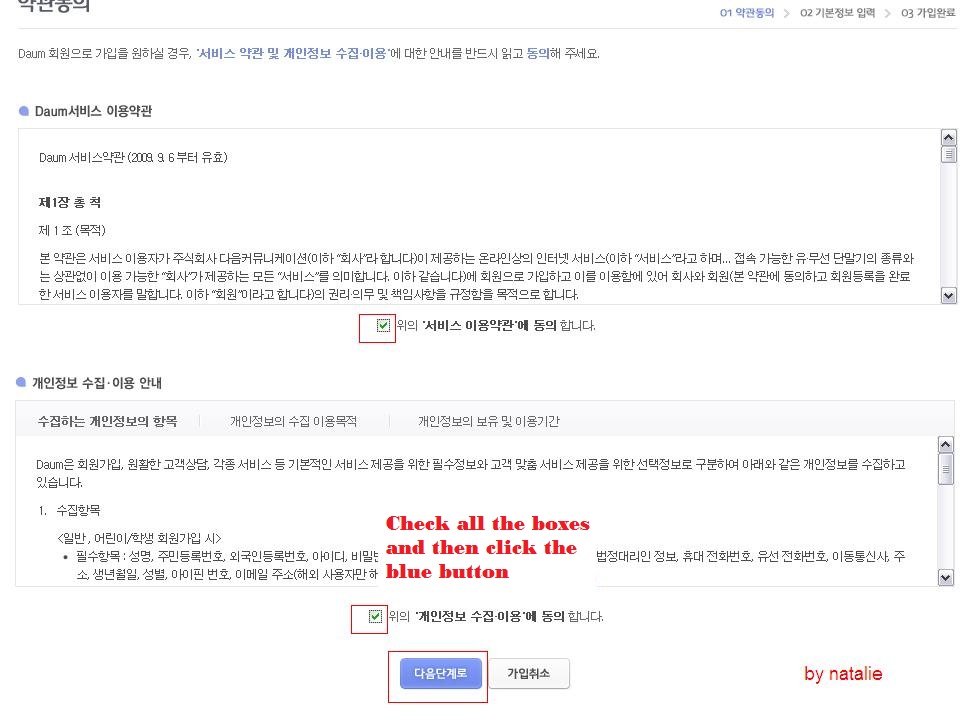 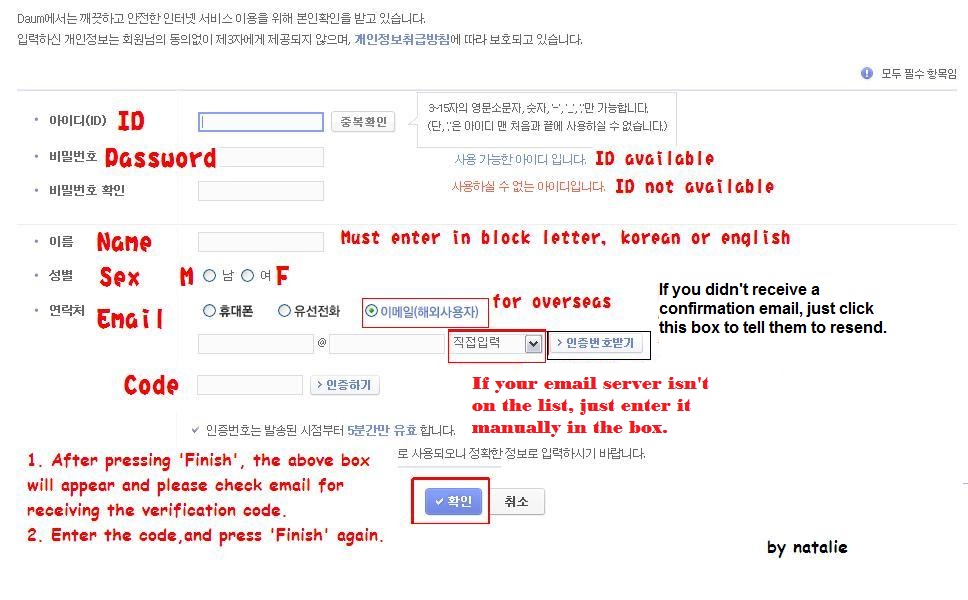 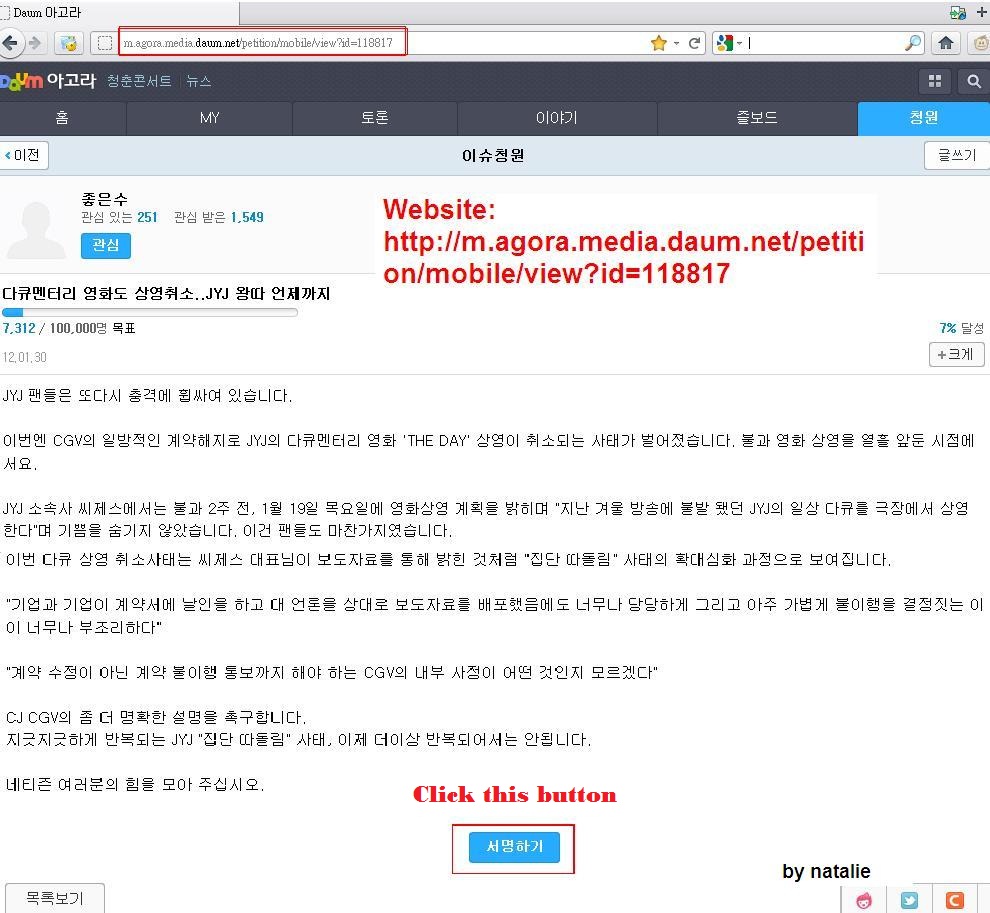 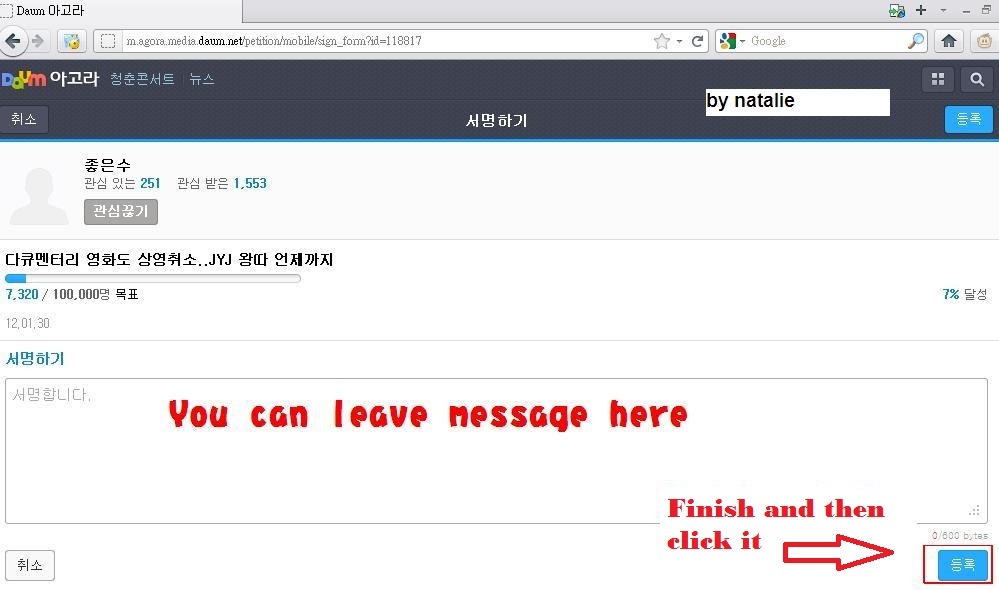 Tutorial by: Natalie
Shared by: JYJ3 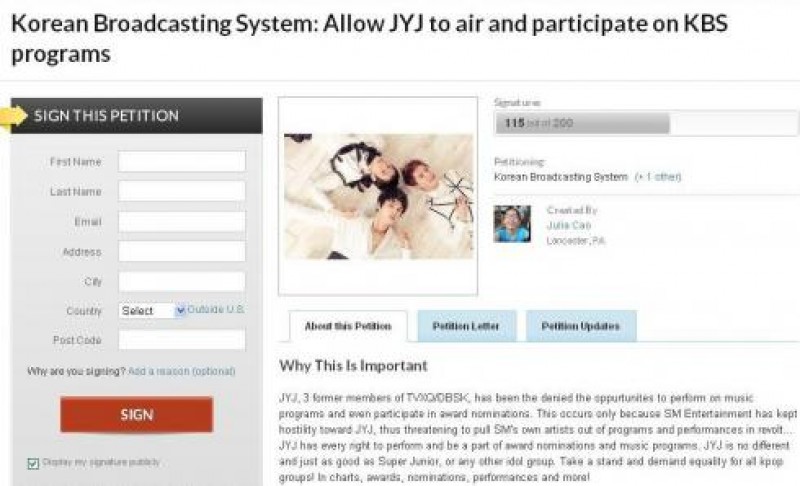 Allow the kpop group, JYJ air on KBS and music programs on KBS

JYJ, 3 former members of TVXQ/DBSK, has been the denied the oppurtunites to perform on music programs and even participate in award nominations. This occurs only because SM Entertainment and other have kept hostility toward JYJ, thus threatening to pull SM’s own artists out of programs and performances in revolt. Others have said excuses that they do not have official albums thus they cannot perform. Even if JYJ has topped charts and album sales without promotions, it is still absurd.