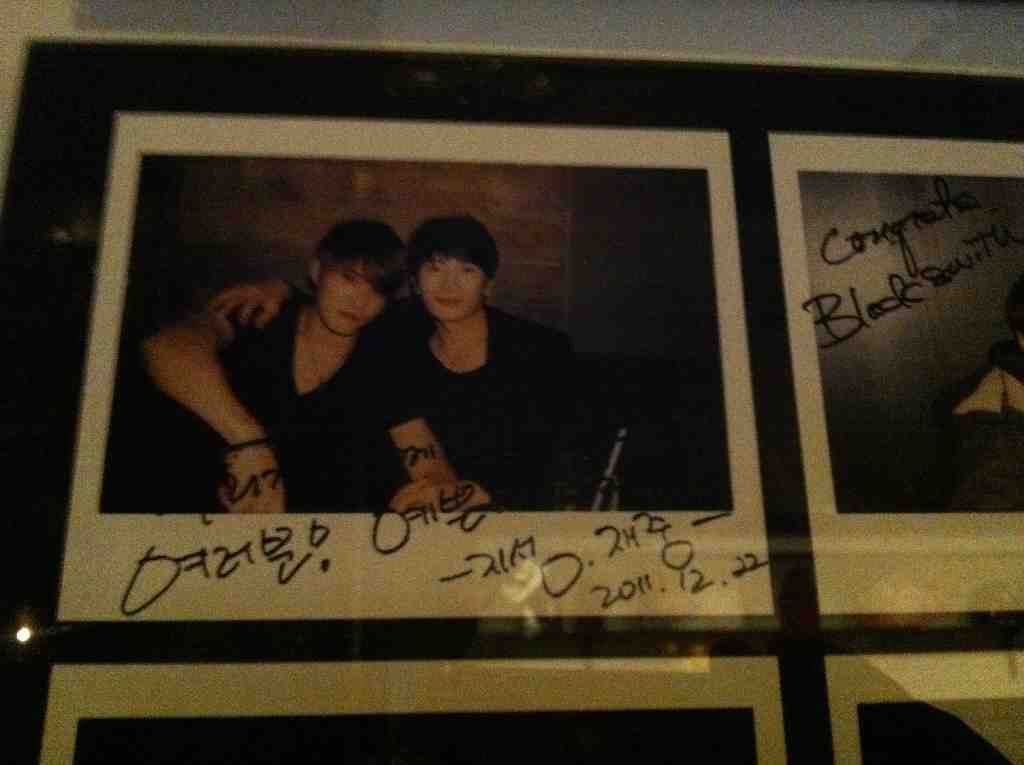 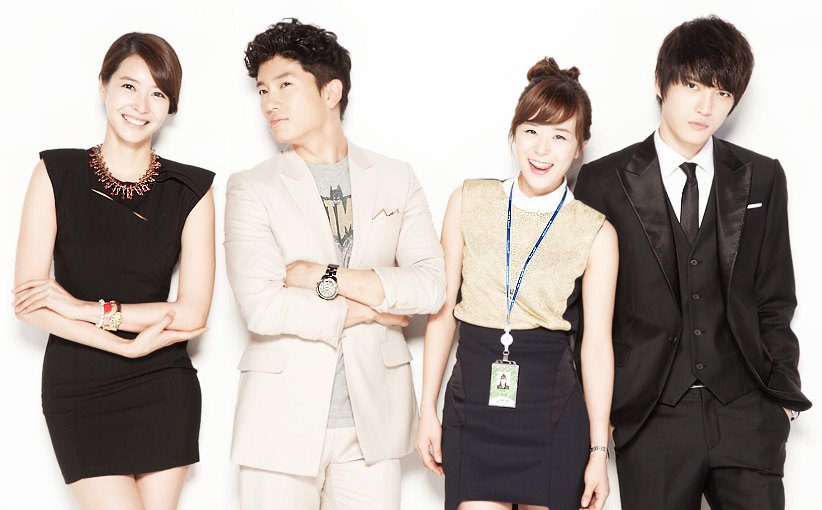 From the SBS drama “Protect the Boss” that received much love this summer, JYJ’s Kim Jaejoong, Ji Sung and Choi Kang Hee will be reuniting after a long time.

The three people will appear on 25 December (starts at midnight of 25 December,continuing on to 26 December) episode of the KBS Radio “Choi Kang Hee’s Vol de Nuit,” gathering together for the first time in a while. In October, Kim Jaejoong made a surprise call in to Choi Kang Hee’s “Pump up the Volume” when Wang Ji Hye was the guest appearance. However, this time he will be appearing directly at the studio, raising the anticipation of fans.

After finding out about this appearance, fans have been full of anticipation, saying “It feels like we received a huge christmas present” “The Cha-Cha couple will be reuniting after a long time, it’s great” “If only Wang Ji Hye could come as well, although it’s a little regretful, but we can reminisce about the drama again,” and other comments.

With Jeju Island chosen as one of the new Seven Natural Wonders of the World by the N7W Foundation, it can be said that this victory was thanks to the domestic and overseas honorary ambassadors of Jeju Island’s campaign. Starting with American football player Hines Ward in May, approximately 100 people were chosen as honorary ambassadors this year.

However, not all the honorary ambassadors were Korean. Paul Potts, who became a star through ‘Britain’s Got Talent’ and 2008 Nobel Prize for Literature recipient Jean-Marie Gustave Le Clézio also took part in helping Jeju Island.

It was thanks to the efforts of these domestic and overseas honorary ambassadors that Jeju Island clinched their victory and became one of the new Seven Natural Wonders of the World. 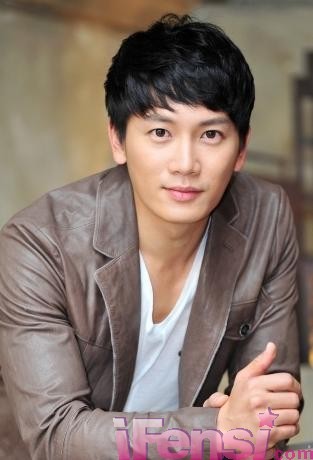 “When I saw JYJ Kim Jaejoong’s fans come to the shooting location to cheer him on, and watch him shoot, I felt that Kim Jaejoong really has infinite charm, and felt very affectionate. However, one day some Japanese fans appeared in front of my house to wait for me (laughs) Usually, fans don’t come to actors’ houses, but after shooting “Protect the Boss”, I have gotten those so-called “Sasaeng fans” (Fans who stalk stars’ private lives), it’s really amazing.”

Unwittingly becoming an idol star due to the drama, Ji Sung was unselfish in his praise for Kim Jaejoong. He said, “Kim Jaejoong dispelled all my biased thoughts about idol groups. Through Kim Jaejoong,  I now know that idol stars who lead the hallyu wave have great strength, and work very hard. Kim Jaejoong always dreamed of being an actor, and now that he has made the first step, I’m really thankful for his hard work, and his efforts changed the entire atmosphere of the drama.” Also, Ji Sung showed his sincere friendship with Kim Jaejoong, who he had formed a close bond through the drama.

“To me, being able to act with Kim Jaejoong was a great experience, and there were many interesting scenes that we worked together on. When we shot the fighting scene, we kept making NGs due to laughter, and I feel that I have gained a good younger brother, so it feels good.” 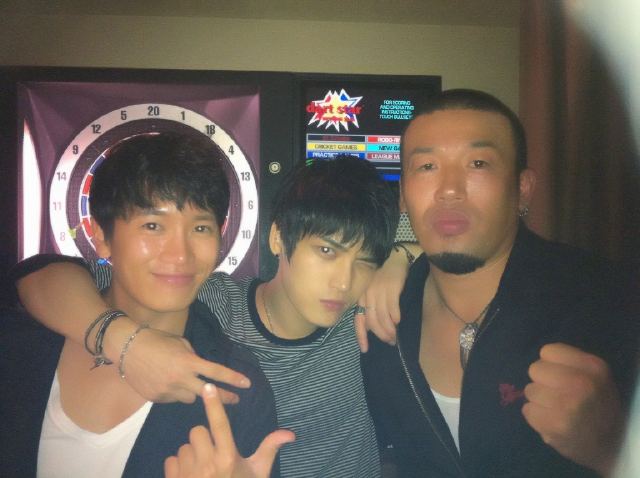 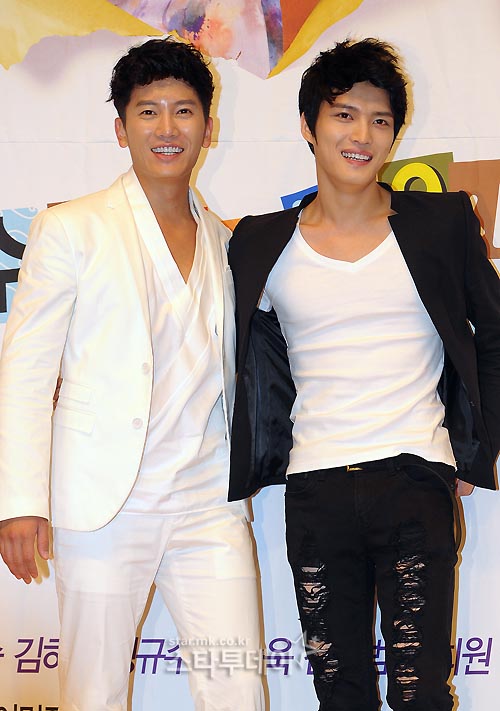 Actor Ji Sung (34) and JYJ’s Kim Jaejoong (25) will be greeting their Japanese fans with “Protect the Boss.”

Starring both men, the SBS Wednesday-Thursday drama “Protect the Boss” will be aired in Japan mid next month. Japan’s KNTV and DATV will be first airing the 18 episode drama on 10 November and 12 November respectively, once a week. KNTV’s broadcast will be kicking off on Tuesday at 10pm (T/N: I believe they mean Thursday since 10 November is a Thursday), and DATV on Saturday at 11pm. Both broadcasts are during prime timeslots.

This success is credited to Jisung and Kim Jaejoong’s hallyu popularity. Ji Sung had gained the love of the Japanese fans after his performance in SBS’s “All In” and cemented his position with “New Heart.” Kim Jaejoong, with his previous singing activities in Japan, naturally enjoys an explosive popularity. In 2009, his collaboration with Han Hyo Joo in “Postman to Heaven” was his first foray into acting for the Japanese fans.

Ji Sung’s side said “Recently when (he) participated in the Busan International Film Festival, many foreign fans were gathered, and we could once again feel his popularity as a hallyu star. Together with the participation of Kim Jaejoong, we anticipate a great popularity (for the drama) in Japan.”

Posted on October 6, 2011 by melodiamuse

Choi Kang Hee applauded the actors she worked alongside in SBS’ ‘Protect the Boss’ as the drama came to an end on the 29th.

In a recent interview with Yonhap news, Choi Kang hee talked about Ji Sung, who is the same age as her and was her love interest in the drama, and said, “He said he has an IQ of 147 and I think he’s really smart.”

She said, “I had great chemistry with Ji Sung. We experimented with a lot of ad libs and would unexpectedly make each other laugh while acting, but those moments molded well with the drama.” She then added, “Ji Sung is both like an adult and a baby at the same time. He’s a warm and caring person so I think he’d make a great husband.”

Regarding Kim Jaejoong, who has just started his acting career, Choi Kang Hee talked with admiration as she said, “Though he’s a rookie at acting, he has this natural gift. There’s something instinctual there. He’s not a star for nothing.”

She then added, “Jaejoong is very, very kind,” and “I had fun acting alongside him.” 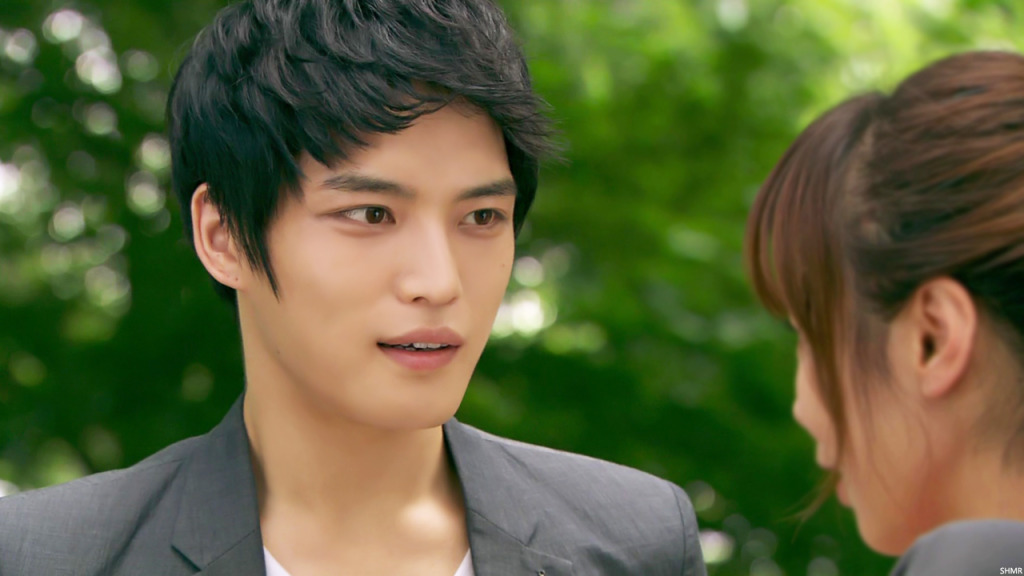 She said, “Though Park Young Gyu is quite old, I don’t feel that age difference with him. He’s really charming and very passionate.”

She smiled as she said, “He felt like such a young person and he made me think that I wanted to live young like him when I reach his age. During the entire filming process, he always said such great things. We told him to collect all those sayings and publish a book.” 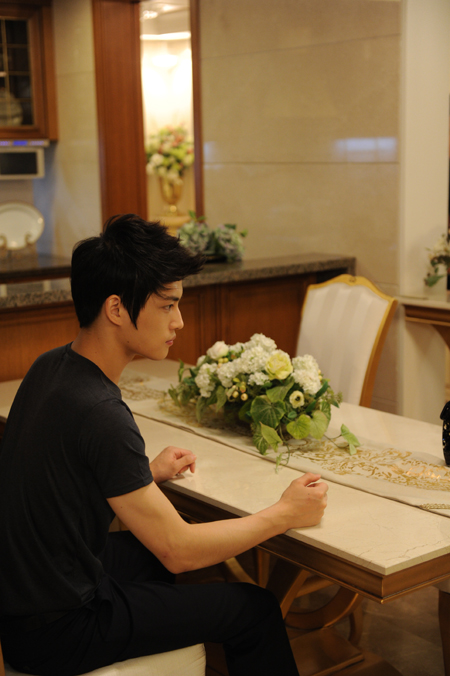 Cha Mu Won, Jaejoong~! This is the day where many females need to take a chill pill 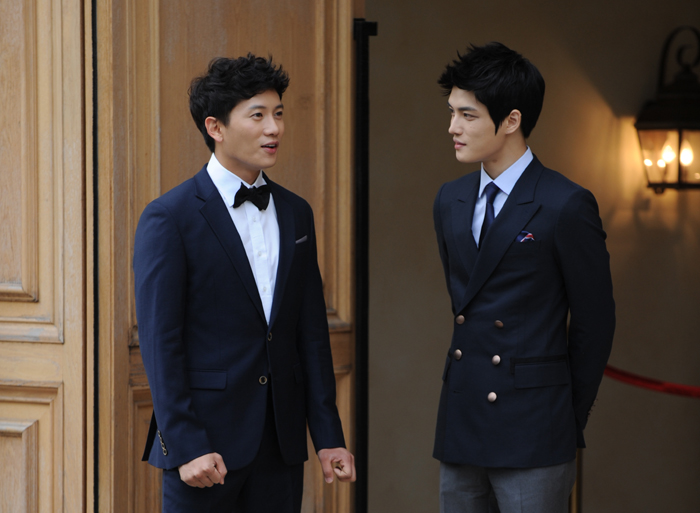 The groom and his family members who look like they are filming a CF. If there’s such a thing wedding, (one) has to attend for sure!! 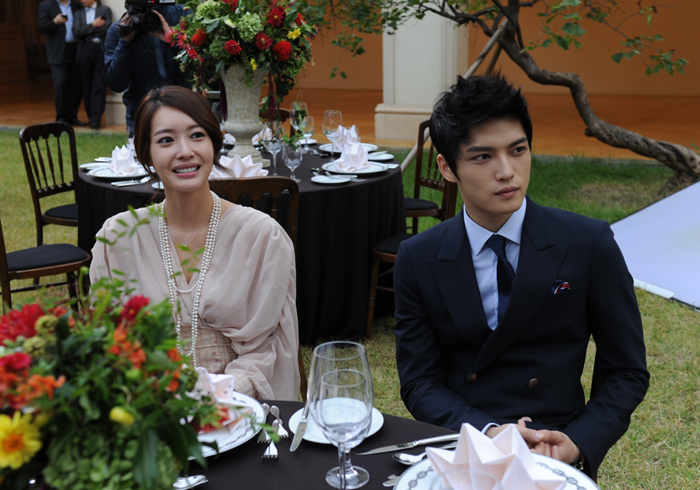 We asked Jaejoong to take a last photo to thank the viewers and he bowed? Do you know? This is his thank-you-bow for everyone~ ^^ 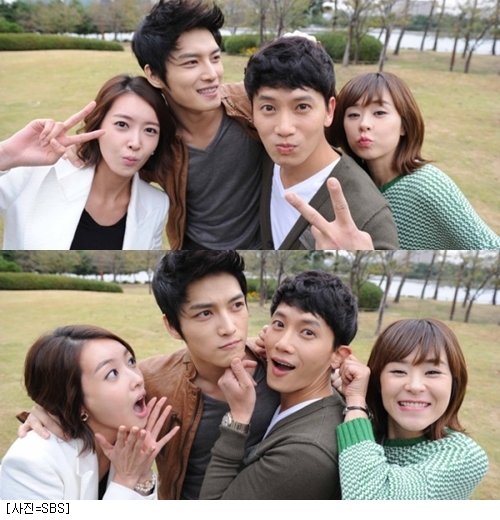 SBS‘s ’Protect the Boss‘ seemed to come out of nowhere with its strong popularity, and many viewers who had no expectations were ultimately surprised by its quality content. But what made this drama stand out from the rest?

‘Protect The Boss’ was a feel-good drama that didn’t have any negative elements of an affair or a broken family; it also lacked a character that you loved to hate. The way that the characters caused problems in the story were endearing in their own way, and when the characters plotted against each other, the situation turned out pretty comical in the end.

For example, there was potential for ‘Cha Ji Hun’ (Ji Sung)’s ex-lover ‘Seo Na Yoon’ (Wang Ji Hye) and ‘Noh Eunsul’ (Choi Kang Hee) to get into a messy rivalry over Cha Ji Hun. But the two didn’t try to make each other’s lives miserable, and they become close friends.

Meanwhile, Cha Ji Hun and ‘Cha Moo Won’ (JYJ‘s Jaejoong) were rivals for a long time; instead of competing intensely against one other, the two fought like grade-school students. They would say things like, “I really don’t like him“, and get into scraps with one another that made the audience laugh. In reality, the two seemed like childhood friends rather than enemies.

‘Protect the Boss’ broke the mold of traditional Korean dramas, as the audience was able to relate with the more “average” and down-to-earth characters. Those who appeared to be the “bad” guy in the story actually wasn’t some horrible, irrational demon come-to-life; in the end, they were individuals who made some bad decisions, but ultimately sought happiness. The fact that these characters were relatable made the audience fall in love with the drama.

But the characters weren’t the only aspect that helped ‘Protect The Boss’ gain popularity. The main issue in the storyline didn’t lie with the characters’ conflicts with one another — it was in trying to disprove the stereotypes of being rich.

For example, Cha Ji Hun has a panic disorder, and although he is the boss, he cared very little about his job. He became a better man after meeting Noh Eunsul, but still had no ambition to take his father’s place in his company. He doesn’t want to inherit his father’s wealth, but even so, his colleagues called him mocking names like ‘Papa’s boy’. The story follows the hardships he endures before he could successfully break free from his situation.

‘Protect the Boss’ was comical and funny, and it also deconstructed the stereotypical ‘Cinderella’ story. Devoid of melancholy, excessive love, and senseless hatred, the story simply told of a person’s journey to find happiness in a relatable way. 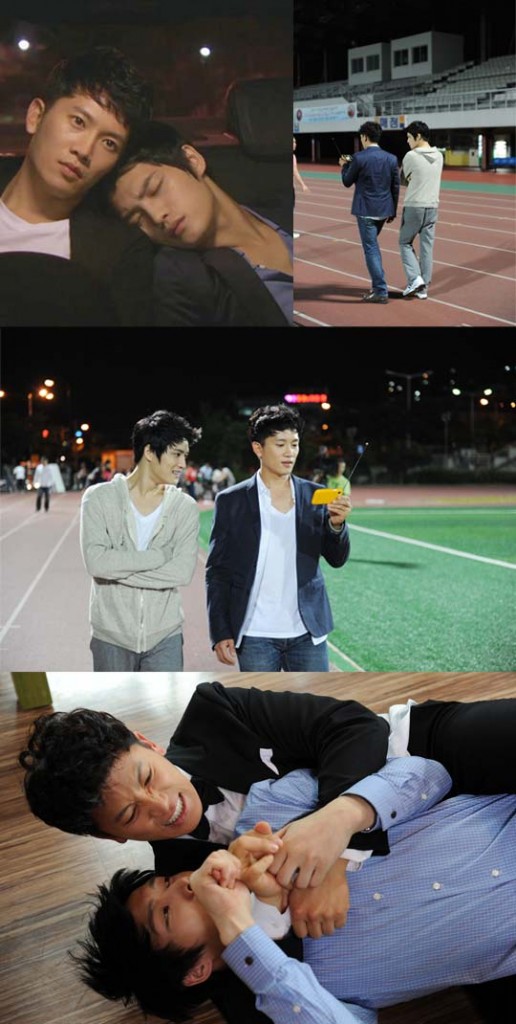 Affectionate photos of Kim Jaejoong and Ji Sung from SBS’ Wednesday-Thursday drama ‘Protect the Boss’ are becoming a hot topic amongst netizens.

In ‘Protect the Boss’, Cha Ji Hun (Ji Sung) and Cha Mu Won (Kim Jaejoong) are pitted against each other as they fight to be the successor of DN Group, headed by CEO Cha (Park Young Gyu).

In the drama, the squabbling pair are seen bashing shoulders or fighting like children in a restaurant but viewers have been saying, ‘Surprisingly, they look good together.” Photos of the pair hanging out together have been posted on Twitter and the newly dubbed ‘Cha Cha Couple’ is receiving much love from netizens and viewers alike.

On the 14th, the production crew released a photo of Ji Sung and Kim Jaejoong watching a TV show on a DMB phone together during their break while filming at Goyang city on the 9th. The two are seen walking together and watching the show with bright smiles on their faces, making it possible to surmise just how close they are.

It was later said that seeing the two together, the production crew and fans who visited on location gave the new couple their support as they said, “They look so cute together,” and “Cha Cha Couple hwaiting~”