So much I saw, so much to say, yet so speechless during Junsu’s actual live performance >.<

People I met: I thought I had to make sacrifices to make it here, but others really showed their support for Junsu. This was my first ever JYJ/DBSK anything concert ever (went to JYJ LA showcase but not actual concert) so I was not anticipating the global support Junsu and the rest of JYJ has! Met fans from Canada, Japan, Thailand, China and Vietnam. From states: Utah, Nevada, Washington, and of course California.

-Also got really close to a Korean Fan, who is studying abroad here at the perfect time for the concert. She is AMAZINGG. Was a fan since Debut DBSK days, still a fan of them all, and almost 10 years and counting!! I was such a nuisance, kept asking so many inside scoops on our boys. And boy, did she know A LOT. K-fans really do keep a lot to themselves haha ^^;; For instance she said some fact/faction on some of their dating life but we couldn’t go too deep b/c of our communication issues. PS: She said I could fan account what she says as she can’t really write in English, and I will remark on her a lot x)

-Talked with Automatic and his Fiancé! Automatic, was a star! He was so chill with talking to Su’s fans and getting pictures. His fiancé told our group that she was happy to work with Junsu, and –cross fingers- with JYJ in the future. It was also her that helped Su with his English for Uncommitted. We said thanks for trying her best as his English coach HEHE b/c he really did improve!

The Line: Thank you to JYJ4SF for preparing so much for us (lightsticks, bookmarks, signs etc.) while waiting for so long! One scene I might be embarrassed about was when we were moving into the Hollywood Palladium, there was food/drink litter and trash EVERYWHERE from waiting in the long lines. My new Korean friend said, that NEVER in Korea would they trash the outside venue because they did not want to tarnish the name of JYJ/Junsu. YIKES, I felt ashamed, though I do admit this part of Hollywood can’t be much cleaner.

Venue: The venue itself was small but intimate for Junsu’s LA concert. Top floor was not open for general audience, only Automatic and other VIP guests went up there. I heard standing floor VIP was sold out, and looked filled to me. Even where I stood in general admission, it was partially full. Love the turnout! There would have been more red and special glowsticks visible too if they were not confiscated by staff at the gate -_- But one good thing about a smaller venue, everyone can practically have a good view of Su.

ACTUAL CONCERT: I’m at a loss of words. I was calm before waiting in line, and then anticipation and excitement arose! I yelled at times, but wanted to hear all of Su’s incredible live singing so did not jump around as much. It went by too fast, and I didn’t wanna miss a single beat. JUNSU came out, and I felt all our adrenaline, blood pumping. My feet were not tired or sore anymore.

-I couldn’t tell, but my Korean friend whose seen him countless of times in Korea said his condition isn’t his best. He was not sick it seems, but prolly due to jetlag and back to back concerts. I thought he was so powerful, intense and energetic!

-FAVORITE SONGS: All were FANTASTIC but must see are Tarantellegra, No gain, INTOXICATION, Elizabeth, and Uncommitted. My favorite ballads: Round and Round, You are so Beautiful. Su even ripped his pants in Uncommitted but played it off well. Couldn’t see in my area, until he left stage suddenly, quickly changed, and told us about it. Su said it was a treat for those who were able to catch that haha.

-During Genie Time, Junsu received a soccer jersey shirt as a gift! Don’t think it counted as a wish. He did Angel Xiah (which he STILL LOVES TO DO based on my k-fan friend, but is shyer as he ages and with men around). He said happy birthday to a fan (lucky girl!), and we wanted him to do an Oyaji gag, but declined prolly cause most of us can’t understand. You underestimate us Su, how can we not know your favorite gags?! He finally did Gangnam style with all our persuading as our last wish!! Maybe he be more comfortable with music on, but I like seeing him all cute and awkward LOL. He said he can’t really do it, cause he simply watched the video but never tried learning it. Junsu, please. You are a fast learner haha, and you say you listen to Gangnam style frequently in your cyworld interview too. Interpreter said Junsu did meet Psy in LA just recently as a plus!

-A fan boy said something prolly like an “I love you Junsu!” and Su replied with his lively English words he knows, sorta like, “WOOH! CHHYEAA! OK! THANK YOU!”

-Fallen Leaves: Yes, he chocked near the end of the performance. No tears, but definitely watery eyed. Aww Su, this song is very meaningful to you and still gets you emotional. Kind of ironic because my Korean friend said she wants to see Junsu cry because in all her concerts seeing him, he never cried! Now she’s saying, “Uljima (don’t cry)!)” He paused a bit to collect himself, tried to smile a bit for us, breathed a big breath, and continued to complete the song. BEAUTIFUL.

CONCLUSION: Honestly, I am not even Junsu biased but Junsu truly captured my heart during this two hour event. I understand why Junsu is so sexy yet so cute, so childlike yet so mature/charismatic! He really is a 110% performer/artist. I can admit no one can hit dance moves with live vocals as spot on as him. It went by too fast. They really do leave us with wanting more huh?! I went by myself, came away with unforgettable memories.
I was trying to make it short but was much longer than expected so sorry! Overall, my favorite and BEST CONCERT I’ve ever been to! No exaggeration needed.

thanks: Alyssa (a reader of sharingyoochun!)

You did well June.Was there a problem with the sound system? Now it’s time to come home and rest up for the second go round. Lots of lozenges, O.K.? See you in the US of A!! <3

A bit scratchy but good visuals 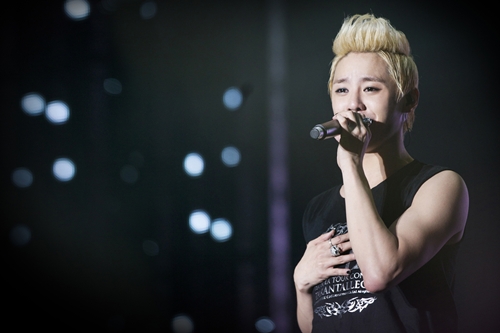 JYJ’s Junsu excited 4000 fans during the opening night of his Asia Tour in Thailand.

The first concert of the Asia Tour for Junsu’s solo album “XIA”, which opened at 6pm on 27 May at the Royal Paragon Hall in Bangkok, Thailand, ended successfully.

On this day, Junsu presented dynamic performances beginning with the new track “Tarantallegra”, which was released on 15 May, followed by hit songs such as “Breath”, “Fever” and “Intoxication”, driving the audience wild. He also touched the fans with his overwhelming vocal abilities during the ballads including “You Are So Beautiful” and “Even Though I Know (알면서도)”.

The fans showed their enthusiasm as they sang along with all the songs which were released in Korean, and held placards which said things such as “XIA TIME” and “We’re always supporting you”. When Junsu sang the encore song “Fallen Leaves”, he was moved to tears, and said, “I am happy to be able to begin the Asia Tour this way. To everyone who has given me your support you, I thank you from my heart.”

On 28 May, Junsu’s management agency said, “The first concert, which parks the start of the 60-day Asia Tour, ended successfully. Although there have not been any appearances on television programmes or other promotional activities, the response for the new album has been good. We think it reflects Junsu’s power.”

Junsu is scheduled to continue holding his first solo album Asia Tour with a concert in Jakarta, Indonesia on 16 June.

(Jaejoong, 5:16pm KST) Did you see the show on TV? That was the beauty of the art that is rhythmic gymnastics~^^ 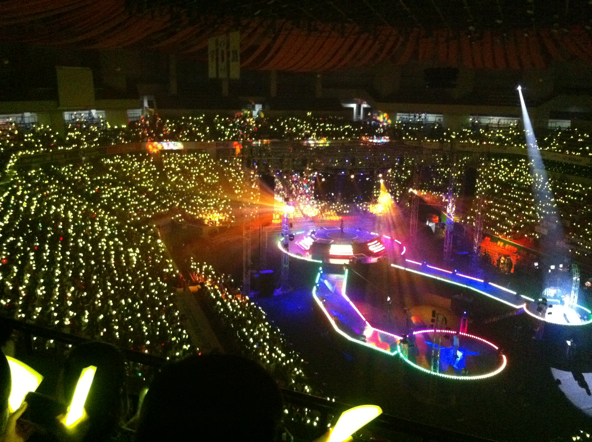 (Junsu, 11:50pm KST) Fallen Leaves….. Before… I would feel so sad every time I sang this song.. I tried and I tried and I tried to hold it back but I ended up in tears each time.. I don’t want to cry anymore.. If we’re starting again.. why should I be crying, right??

(Junsu, 11:50pm KST) I miss you because I love you.. Your smile will always stay in my heart…. So you don’t have to hurry.. Because we will start again, just like how a flower blooms once more after it has fallen..

…*erases Young Pil’s address on the box and writes down mine*
(Junsu, 12:30am KST) Young Pil hyung, I sincerely wish you a happy birthday!! My present to you is me~~ clap clap clap

Junsu, I still love this song among other favorite songs. It stirs my heart. Momma Cha

credit: as tagged via uploaders @YT
our source iXiahcassie

Absolutely precious. I hope we get to keep them. Momma Cha

Be My Girl (remix)